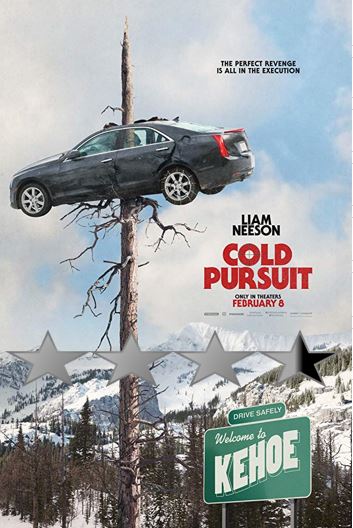 Plot: A snowplow driver seeks revenge against the drug dealers he thinks killed his son.

Tagline – The Perfect Revenge is all in the Execution.

Story: Cold Pursuit starts when Nels Coxman (Neeson) wins the man of the year for his small town of Kehoe, he clears the roads for the residents in the snowy town, his son Kyle (Richardson) becomes a target for the local drug dealer Speedo (Eklund) who murders him.

Nels decides to go on a revenge mission, targeting Speedo first before moving up the chain, which sees him target the drug lord Viking (Bateman). Nels uses his brother Brock (Forsythe) to learn the field, which soon sees the Indians White Bull (Jackson) creating a turf war between the rival gangs.

Characters – Nels is a quiet man who has spent his life cleaning the roads of snow, earning the respect of his town so much so that he gets the man of the city. When his son is murdered he goes out on a revenge mission against the local drug lords behind his murder. He remains calm even though he has lost everything, being prepared for every situation believing he is in control through the revenge. Grace is the wife and mother that just switches off leaving Nels after what happened. Viking is the local drug lord, he dictates everything in his life including his child’s menu, he is easily the one character you quickly come to hate because of his actions. White Bull is the leader of the Indians that run the operation in Kehoe, he end sup being dragged into the battle when Viking targets him for his own missing men, he isn’t happy with changes from the native land his forefathers once had.

Performances – Liam Neeson does give us a different performance than we are used to in this action films, this is one where he clearly looks like a reluctant killer who has lost everything. Tom Bateman is the highlight of the film, because he is the one that makes us hate him by how he treats everybody in his life, both personal and business. Tom Jackson brings a calm performance to his drug lord figure which will see a different idea to how his character sees the business. We get plenty of supporting performances that will get the laughs when needed.

Story – The story follows a mild-mannered man who sees his son murdered by the local drug lord and decides to go on his own revenge mission to eliminate the problem once and for all. This does play out differently than your normal revenge movie, because Nels side is slowly learning the hierarchy involved like normal, but how the drug lord deals with the problem sees him going after the rival gang which only builds the size of chaos going on. One of the weaknesses in the story is the police, who only seem to be involved to fill in certain blanks in the story rather than doing anything for the case. We do also tend to have conversations that aren’t needed which only drags certain scenes out for no reason, let not talk about the whole watching a car drive into Denver every single time.

Action – The action does feel held back in places which saves for the big blow off scene to complete the war between everybody involved.

Settings – The film is set in Kehoe, just outside of Denver, this is a snow covered town which is filled with tight roads in need of clearing, the locals are close and will help each other out. 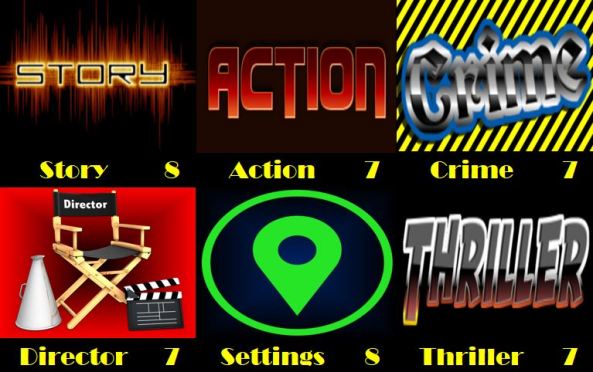 Scene of the Movie – The death messages which show who has died and by which side of the battle.

That Moment That Annoyed Me – Driving to Denver.

Final Thoughts – This is a dark action thriller which is filled with a dark humour, it is a simple revenge idea which will take things in different directions than the normal. 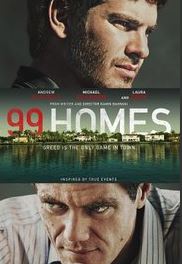 Plot: A recently unemployed single father struggles to get back his foreclosed home by working for the real estate broker who is the source of his frustration.

Tagline – Greed is the only game in town.

Story: 99 Homes starts with hard working young man Dennis Nash (Garfield) trying to keep his family home from being reclaimed by the bank, but he is unsuccessful as real estate broker Rick Carver (Shannon) evicts him from his home with his mother Lynn (Dern) and son Connor.

Desperate for money Dennis turns to Rick who offers him a job involving his construction skills, with this job Dennis starts to learn the trade rising the ranks to become the very person he despised in Rick when he was losing his home.

Characters – Dennis Nash is the hard-working construction worker, he works to keep the roof over his family home but when he loses his home he goes to all ends to get a job to regain his home. This means Dennis works for the man who evicts him where he learns the trade to make sure he can his home back become the man he once hated. Rick Carver is a real estate broker, he has been evicting for the bank for years now, he doesn’t believe he is doing anything wrong, but he is following the law. He has made a lot of money in this world and takes Dennis under his wing to follow in his footsteps.

Performances – Andrew Garfield is fantastic in this leading role, this guy is constantly giving us performances that we are left seeing just how talented this guy it. Michael Shannon is the always brilliant star of most movies, he is calm through every single scene which could have himself getting pushed to the limits. Laura Dern is good too in the supporting role as Dennis mother that questions his work.

Story – The story here shows one man’s struggle to keep his family home but needing to turn to the enemy to make the money. We see how far he must go just to make a difference, but can he cope with becoming the man he hates. The story gives us hard to watch scenes as we see people losing their homes showing us a darker side to real estate in America. This is one story that is a good watch, he can be hard at times, but the story is rewarding.

Settings – The settings show us the housing market and how people can be a community when supporting someone’s miss fortune. 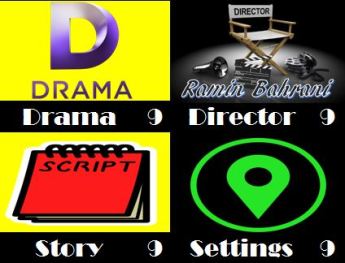 Scene of the Movie – Seeing Dennis question his decision.

That Moment That Annoyed Me – We get a lot of law discussion, but a lot can go over your head.

Final Thoughts – This is a powerful drama that shows how difficult life could be for the people who lose their homes to the people looking just to make the money by taking them.

Plot: The story of Ray Kroc, a salesman who turned two brothers’ innovative fast food eatery, McDonald’s, into one of the biggest restaurant businesses in the world with a combination of ambition, persistence, and ruthlessness.

Story: The Founder starts in 1954 as milkshake machine salesman Ray Kroc (Keaton) is performing his sales pitch around the diner scene. His luck is about to change when Dick (Offerman) and Mac (Lynch) the McDonald brothers order eight machines which grabs Ray’s attention as he visits to hear the story of the first ever McDonald’s and how the service revolutionary idea behind 30 seconds’ food service.

Seeing the operation Ray wants to franchise the idea against the brother’s wishes. When Ray finally gets his way he makes McDonalds the fastest growing business in America but the backlash falls when the brother’s want their share of the business they created leading to a law case getting everything messy between the two sides.

Thoughts on The Founder

Story – This is an interesting story of where McDonalds came from which is fine but my issue is the lack of a real-time scale of the events, I also didn’t like how the end credits show certain important elements of the story which barely get touched on in the film. in the end the story is just another story about a ruthless business man who took advantage of the real brains behind the idea.

Biography/History – This is a good look back at how McDonald’s is founded and it shows part of the history where a business man took advantage of the real workers.

Characters/Performance – The characters are all based on real people with Ray Kroc coming off as the ruthless businessman who just doesn’t give up, while thee brother’s being portrayed as the suckers who wouldn’t believe his business mind. The rest of the characters are all only bit parts in the film with them only being part of Ray’s life.

Performance wise Keaton does shine with Offerman and Lynch both being great as brother’s, it is hard to say a bad thing about any of the performances in this film.

Settings – The settings used all reflect the time the film is set in, with the iconic McDonald’s logo being the most iconic moment in this film.

Final Thoughts – This is could easily have been just a documentary that would have been a lot more interesting as an all-round story.

Overall: We have seen this before and in the end it brings very little new. 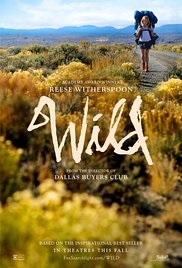 Plot: A chronicle of one woman’s 1,100-mile solo hike undertaken as a way to recover from a recent personal tragedy.

Story: Wild starts as we Cheryl (Witherspoon) getting prepared for her 3-month hike along the Pacific Crest Trail to help herself get over the recent death of her mother. We watch how Cheryl’s life had been fallen apart before this challenge including throwing away her own marriage.

Wild is a slow drama showing how one woman went on her own redemption story going on an almost impossible hike that even the most experience drop out off. We get to see what drove her to make this decision but in the end it feels like a glorified story that we have seen before. You do have to give Reese Witherspoon praise for her performance but in the end this is easily a forgettable film that got Oscar nods for no reason.

Overall: Disappointingly overrated drama that is fine but nothing special. 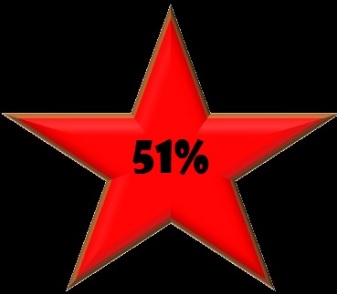 Plot – A father struggles to get back the home that his family was evicted from by working for the greedy real estate broker who’s the source of his frustration.

Summary: I like the look of this one, I like the idea that we see one man being pushed to his limits to make sure he can keep a roof over his own family’s heads even if it means becoming the very man he didn’t want to be. All three performance look brilliant it will just be more about how far he goes and will he become the full version of the man who kicked him out.