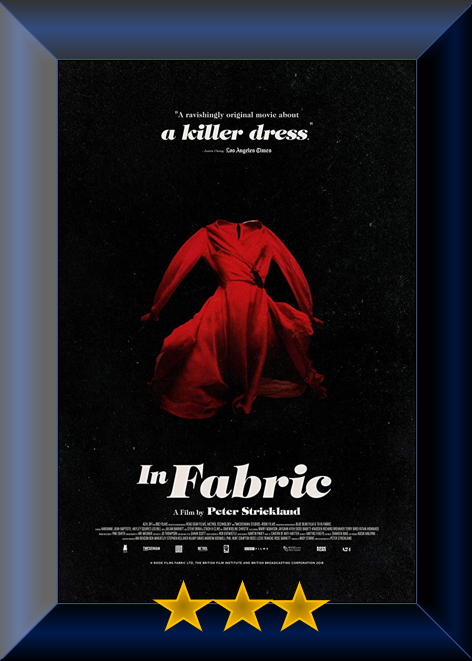 Plot: In Fabric is a haunting ghost story set against the backdrop of a busy winter sales period in a department store and follows the life of a cursed dress as it passes from person to person, with devastating consequences.

Story: In Fabric starts as we meet divorced mother Sheila (Jean-Baptiste) who is seeing her son Vince (Ayeh) prepare for college with his muse Gwen (Christie) slowly taking over the house, Sheila is looking for love in the personal ads with her needing to by a brand-new dress.

Soon after wearing the dress for the first time, Sheila notices strange things happening around the house as the tensions between Shelia and Gwen continue to rise. Shelia’s life gets turned upside down, which only escalates the more she investigates the original model of the dress. 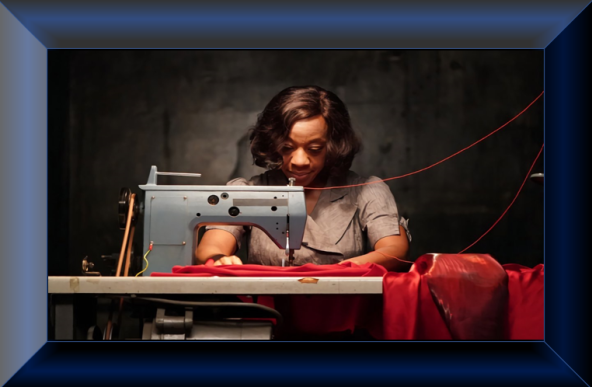 Thoughts on In Fabric

Characters – Sheila is a divorced single mother who works as a banker, she is trying to move on with her life, as her son is about to be moving on with his life, she is gets a new dress, which only starts to increase the troubles in her life. Gwen is the older woman dating Sheila’s teenage son, she is slowly taking over the house being very disturbing with the tension filled interaction with Sheila. Reg is on a stage-do which sees him get the dress to wear, he is preparing for his own wedding, starting to see his own life spiral out of control, with Babs being the wife-to-be that is still preparing the wedding.

Performances – Marianne Jean-Baptiste is great for her part of the film, this is mainly because the film is split into two stories with eh dress, Marianne has the first one and shows the struggles she would be experiencing. When it comes to the rest of the cast, it does feel too late into the movie to get truly invested in the second set of actors story.

Story – The story here follows two different people that come in contact with a mysterious dress that has its own abilities to ruin their lives, we are left to guess just what is causing the pain to happen and why this dress is acting the same way around people. This story is flat out weird to follow, mostly because we have two different stories that might well be connected, they are separate enough to leave us with different ideas for each family to deal with. The story doesn’t seem to give us enough answers about the dress itself and with on fleeting images of the store it came from, which only ends up leaving us feel like we could have had more from the story.

Comedy/Horror – The comedy in the film comes from just how outside the box the idea is, while the horror comes from seeing how the dress acts and what it causes to people’s lives.

Settings – The film tries to keep the locations down to everyday ones, be it the two homes, the store or the employment locations, it shows how the weird events of the characters lives happen without anything needing to come from outside the box.

Special Effects – The effects are used well through the film as they show different levels of damage being caused.

That Moment That Annoyed Me – Not enough behind the mystery of the dress.

Final Thoughts – This is a horror that can be described with one key world, weird, it is filled with strange moments that only leave us with more questions than answers.