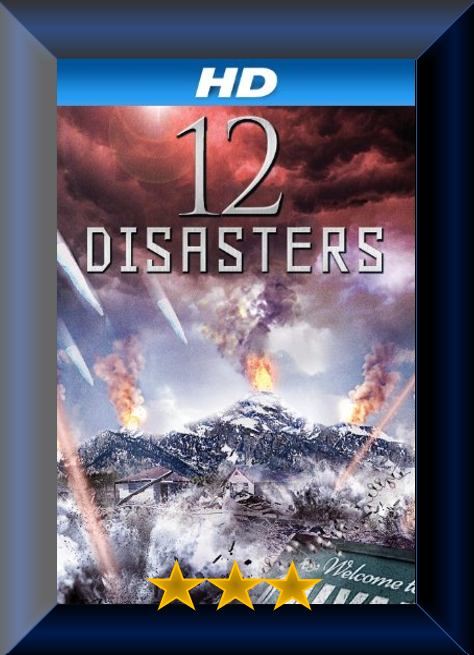 Plot: It’s Christmas Eve when an ominous dark star appears in the sky; could this star be a sign that Judgment Day is near? When massive earthquakes and natural disasters tear apart cities, it seems that the day of reckoning is upon us – and now a small band of heroes must come together to save the world!

Story: The 12 Disasters of Christmas starts on Jacey’s (Apanowicz) 18th birthday as she has a climbing day with her father Joseph (Quinn), the day takes a turn when Jacey’s grandmother gives her a ring claiming she is the chosen one.

Once the sky starts raining shards of ice, it becomes clear that this is just the latest disaster which is claiming the end of the world is coming, through different disasters, with only one person that can stop it, Jacey

Thoughts on The 12 Disasters of Christmas

Characters – Joseph is the husband and father that has been fighting to save his town from new control after seeing the jobs disappear, when the events of the disasters start happening, he will join his daughter in putting the clues together to try and stop the world ending, even if people do try and stop them. Jacey has just turned 18, she enjoys the physical hobbies including climbing, she wants to move away for college, which is the biggest strain in the relationship between her and her father, until she learns she is the chosen one that can stop the disasters, she gets put through pain whenever one is about to hit too. Mary is the mother and wife that is always around for medical problems the town is facing. Kane owns the town, he did grow up there, but has been looking to turn the town around to make more money for himself.

Performances – Ed Quinn does well enough in the leading role, this is a Syfy movie, so we know the performances aren’t going to be winning any awards, they just need to make sure they are passable for a film like this, which they whole cast is strong enough through the film.

Story – The story here follows a small town that happens to be the epicentre of the end of the world after the prophecy claims that 12 disasters will signal the end of the world, unless the chosen one can stop it. The story does spin the idea of the 12 days of Christmas by turning it into different theories about disasters, which sadly is one of the weakest parts of the film because the disaster doesn’t match the songs ideas. If you look at this as a series of disasters, this is a fun enjoyable story, it plays out just like you would imagine, knowing who will die and when, usually just after giving the message, but it does feel fresh compared to most of the disaster films that don’t feel like they can be stopped with the power of one.

Action/Sci-Fi – The action is a lot of different disasters, we have slow chases, nothing is truly ground breaking or leaves us with a giant set piece like most disaster films, while the sci-fi side of the film focuses on the idea of the world coming to an end, where the fantasy elements could be the one thing to stop it.

Settings – The film is set in a small mountain town, which shows how close everybody is and how they would react to crisis.

Special Effects – The effects in the film are the low-budget ones we would expect, there is a couple of moments that work very well, even with the budget.

Scene of the Movie – The invisible wall.

That Moment That Annoyed Me – The disasters don’t match the song lyrics which is implied by the title.

Final Thoughts – This is a fun disaster movie, it keeps things simple, has plenty of peril and an idea that bigger things could happen if they are not stopped.