Plot: A smart but sensible new graduate lands a job as an assistant to Miranda Priestly, the demanding editor-in-chief of a high fashion magazine.

Story: The Devil Wears Prada starts as newly graduated journalist Andy Sachs (Hathaway) gets a chance to work as the second assistant to editor-in-chief Miranda Priestly (Streep) at a high fashion magazine. Andy is one of many applicates only she doesn’t have the knowledge of the fashion world, unlike the first assistant Emily (Blunt).

Andy must learn to get through the cold nature of Miranda who always looks down on her and everybody, to get through a year which could put her in a position in the journalist world she has always been dreaming off.

Thoughts on The Devil Wears Prada

Characters – Miranda Priestly is the feared editor-in-chief of a fashion magazine, her presence makes her employees dress to impress, everybody in the industry respects her opinion and for some reason she decides to take on Andy, she pushes Andy to the limits to see if she is good enough to work or her, like all the employees. Andy Sachs is a journalist graduate who is looking to a job in any publication, she doesn’t understand the fashion industry with this job being her gateway to her dream job, but she must learn fast or face being eaten alive in this industry. Her time in the job sees her change who she once was, pushing her friends and boyfriend away. This one-year job could see her future open, but her friendships vanish. Emily is the first assistant under Miranda, she knows the ins and outs of the business and has been waiting for this role for years. She doesn’t like Andy because she doesn’t have the same desire in the fashion industry. Nigel is the only person in the office that Andy gets along with, he does help put her on the right track for success under Miranda.

Performances – Meryl Streep is fantastic in this leading role, she brings a horrible boss to life, without making her seem like a truly horrible person, just somebody career driven. Anne Hathaway is wonderful too, to start with it seemed weird that she wasn’t considered the right body shape for position in the fashion world, but it does make perfect sense with how this world is working. Emily Blunt brings what should be a small role, to be one of the most interesting and entertaining part of the film. Stanley Tucci is a delight in the supporting role being the moral compass for the Andy character.

Story – The story follows a recent graduated journalist that takes a job working under one of the most notoriously difficult editors in the industry, here she must learn the industry to stand a chance to above water in this world, while gaining the experience she requires for her own success. This story first shows how difficult finding the first job for experience could be for any former student trying to get int the industry, it shows how fast the learning curve could be, how you can be looked upon as a replacement for others job too. It shows us how careers can take over lives if you let them which is important for how Andy changes through the story. most importantly it shows us just how you should never forget where you came from and the people that were there for you when you needed them. You will also get to have a laugh at how the fashion industry is considered to operate at the pace which could make or break careers in no time.

Comedy – The comedy in this film come from seeing how the world operates, seeing Andy needing to learn fast, the relationship with Emily and just how everyone can act over the top about the smallest detail.

Settings – The film is set mostly in New York, it shows how the business lives can move at such a pace it would be hard to keep up. 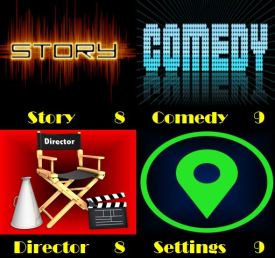 Scene of the Movie – Andy sees a real side of Miranda.

That Moment That Annoyed Me – Not understand brand names.

Final Thoughts – This is an enjoyable comedy with wonderful performances from the whole cast.

Plot: A seemingly innocent man is abducted by a notorious L.A. serial killer, who forces his victims to switch roles with him so that he can enact his own capture, torture and murder.

Verdict: Not as Intense as it Should be

Story: The Basement starts when Craig (Long) running a quick job for his wife Kelly (Barton) gets abducted by a notorious serial killer Bill (Davis) who puts Craig through a tortious night, with his split personality coming through on each different interaction.

Craig does try to figure out just what is on the mind of the killer, learning to adapt to each interaction each one revealing more to the true story about Bill, but will he make it out alive?

Thoughts on The Basement

Characters – Craig is the famous guitarist that is abducted by the serial killer, trapped in the middle of the game, he is left to try and stay one step ahead of the story being told, where he is forced to play a part of. We do learn from his wife who is searching for him that he has done wrong in the past, but does seem to be on the straight steady line now. Bill is the serial killer with split personalities, he puts his victims through an ordeal which will test their own sanity, each character is different which helps us understand his darker side. Kelly is the wife of Craig that is worried that he has gone missing believing he has fallen off the wagon again, most of her work is wondering just where her husband is though.

Performances – Cayleb Long in the leading role does struggle to make a big impact in this film, we don’t truly feel the peril he finds his character in, with his interactions never feel intense enough. Jackson Davis on the other hand is the highlight of the film, he keeps us on edge to what he will make his character do next. Mischa Barton is the biggest name in the film, though she doesn’t really have much to do throughout the film.

Story – The story here follows a serial killer that is putting his latest victim through a series of twisted characters, think ‘Split’ with a cohesive series of characters other than random ones we get through that film. This does bottle down to a series of interactions between the main two actors, which could and should be edge of your seat intensity, though it falls short between the two. The side of the story following the wife also gets tiresome because for the most part it does feel pointless compared to what Craig is going through.

Horror – The horror comes from the not knowing just what will happen, the serial killer has a routine he follows, which does have moments of torture, even though he is always in control of the situation.

Settings – The film takes place in two main locations, the basement (well that is the title of the film) which keeps the torture isolated for the night and for some reason Kelly’s sofa where we talk for little to no reason.

Special Effects – The effects for the most part are good practical effects which are saved for when needed.

Scene of the Movie – The blowtorch scene.

That Moment That Annoyed Me – Most of the Kelly scenes seem pointless.

Final Thoughts – This is a horror thriller that just doesn’t hit the levels of intensity that should do.

Overall: Horror that disappoints to delivery.