Plot: Biopic of the iconic French singer Édith Piaf. Raised by her grandmother in a brothel, she was discovered while singing on a street corner at the age of 19. Despite her success, Piaf’s life was filled with tragedy.

Story: La Vie en Rose starts when young Edith is left in her grandmother’s care in her brothel where prostitute Titine (Seigner) becomes her best friend, she suffers here after becoming sick and newly losing her sight. Taken to the circus by her father, it isn’t long before the two find themselves alone with Edith showing signs of her singing ability.

At the age of 20 Edith (Cotillard) is singing on the street corners with her friend Momone (Testud) before she gets noticed by Louise Leplee (Depardieu) who offers her a chance to sing in his clubs, this is just the beginning of her career as a performer. Edith’s life never went a smoothly as many others because behind the scenes we had plenty of problems.

Characters – Edith Piaf is the famous French singer, she didn’t start on the top, we learn the struggles she faced, with her upbringing in a brothel and circus, before turning to the streets as a singer. Given the chance to perform on stage she never looked back when it came to performing, but she did enjoy partying which catches up with her as people try to control her rise to the top. Through the film we meet people that are important in Edith’s life, though one thing becomes clear, she doesn’t seem to stay around many people for too long.

Performances – Marion Cotillard won an Oscar for this performance, you can see why, she is fantastic cover multiply different years of the singer making each age seem realistic for the audience to understand the struggles she is facing next. Everyone else in the film is great, though most struggle to reach the complete level Cotillard achieves in this film.

Story – The story follows the life and career of performer Edith Piaf one of the most famous French singers of all time, we see how her life started with the battles to get out of the brothel and off the streets, to be where she belonged, on the stage, however many tragic events came her way. The story is told with plenty of time jumps between different ages which at times can be frustrating because this style of movie is often better to watch in the linear process, even if it is somebody looking back on life. Away from that little nit-pick, we see how amazing the story of Edith was with her final performance being the most iconic of all her songs.

Biopic/Romance – We get to see most of the important moments in Edith’s life with this story, the performances and the tragic moments.

Settings – Each setting used in the film shows us just how the film was able to recreate the location that would have been used for the real moments in the life of the singer, with the performances feeling like they would be where they would really have taken place. 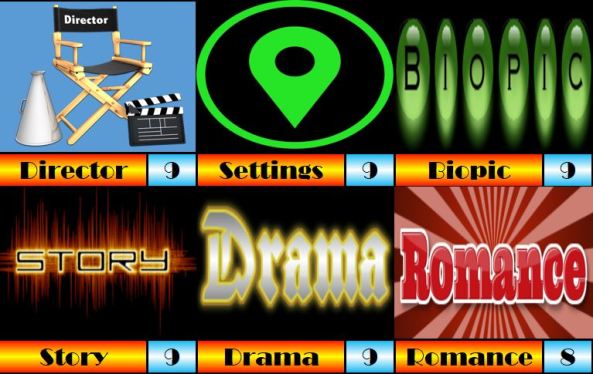 Scene of the Movie – The final performance.

That Moment That Annoyed Me – The time jumps are off putting at times.

Final Thoughts – This is a brilliant biopic that shows just how talents Cotillard is and teaches us about a brilliant singer that will never be forgotten.

Plot: A darkness swirls at the center of a world-renowned dance company, one that will engulf the artistic director, an ambitious young dancer, and a grieving psychotherapist. Some will succumb to the nightmare. Others will finally wake up.

Story: Suspiria starts with Patricia (Moretz) going into hiding from her dancing company, turning to Dr Josef Klemperer (Swinton), this leaves a space in the program which American Susie Bannion (Johnson) gets given the chance to take in Berlin. Susie impresses the artistic director Madame Blanc (Swinton) and it isn’t long before she gets to learn about the most popular dance.

Susie soon gets given the lead in the dance, the one Madame Blanc has spent years perfecting, only she gets to see the darker side of the company which has the ability to consumer the dancers.

Characters – Susie is the American given the chance to perform in the biggest dance company in Berlin, one with a huge reputation for being one of the best and strongest in the business, it doesn’t take her long to impress as she becomes the lead in the performance, she is left to wonder at what cost though. Madame Blanc is the director of the show, she knows talent and knows how to get the bet out of the talent, while disposing of the unwanted talent. She is a strict perfectionist, that will get the moment she needs for the show. Sara is the member of the dance academy that is friends with the one that vanishes, while being the friend that guides Susie through the welcoming, she learns more about the truth behind the plans. Dr Josef Klemperer is one Patricia turns to for help, he stats to learn more about the dance company while dealing with her own loss from the world. Patricia is the one that goes missing and opens up the space for Susie to take, she has become paranoid about what is going on, which will force Sara into investigating in more detail.

Performances – Dakota Johnson steps away from the ‘Fifty Shades’ franchise with ease here, bringing new life to her career, which is much needed, she shows us here that she is going to be one of the top stars for years to come. Mia Goth continues to show us why she is picked for the roles that never seem normal, while Chloe Grace Moretz steps away from her younger roles with a much more mature role. It is Tilda Swinton that shows her true talent with her roles in the film, the dance director is an easy one for her, while the male doctor shows us just how talented she truly is.

Story – The story follows a young American that joins a famous dance company only for the company to have a much darker side which the dancers are becoming consumed by. This is a remake and as I have never seen the original, I don’t know how similar the story is, which is fine, because it may have a couple of nods to the original and casting choice including original cast members, the story focuses on just what could be going on within the dance company and how it operates. We learn early on what they are up to and just how shocking it is and for the most part we are left wondering just what is going on with the main performer. 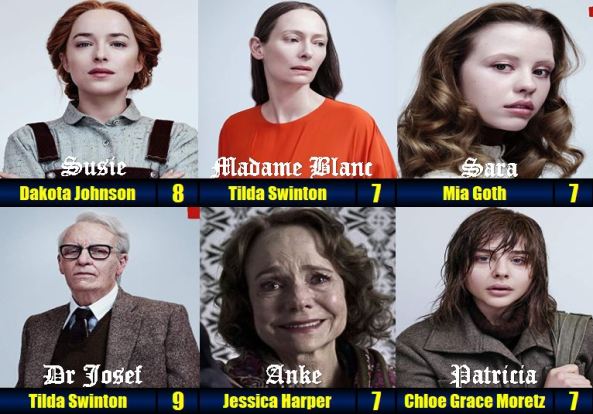 Fantasy/Horror/Mystery – The fantasy side of the film goes hand in hand with the horror of just what is going on, it is a very dark world and the mystery of just how we get there is what will drive the audience to enjoy.

Settings – The film is set in Berlin, this shows us that the world is still affecting the people around the city and how strong this dance company had become.

Special Effects – The effects in this movie are shocking in their realism which will disturb and shock through the film.

Scene of the Movie – The performance.

That Moment That Annoyed Me – It does feel like a long film for no reason.

Final Thoughts – This is one of the craziest horror films from a year which was filled with the horrors that fit that quota. It does feel very long which will turn away audiences, but the committed horrors fans will enjoy what they see.

Overall: Crazy, disturbing and one you won’t forget.