Story: Drone starts as we see a drone hit in Pakistan, one year later we are back in America with Neil (Bean) and Ellen Wistin (McCormack) a married couple dealing with everyday problems and a teenage son Shane (Haynes). Unknown to them they are being followed by Imir Shaw (Sabongui) a Pakistan business man.

Neil is a drone pilot working with his partner on the coms Gary (Moore), their craft is searching Pakistan for the latest terrorist subjects and they are an effective team. Imir coming into the lives of the Wistin’s who are also dealing with the loss of Neil’s father, just as the release of government employees information has been leaked. Imir comes into the lives to purchase a boat, but his true motives become clear and the secrets of the Wistin family are revealed.

Characters/Performance – Neil is a secret private drone pilot contractor for the government. He keeps this job secret from his family, he is also going through the loss of his father, he now must face the consequences of the collateral damage on his mission. Imir is a calm businessman from Pakistan who has alternative motives, he wants to confront the pilot of the drone that killed his innocent family. Ellen is the wife of Neil, the two have become strained leading to her getting involved in an affair.

Performance wise, Sean Bean is good in this role but his accent is slightly all over the place. Patrick Sabongui is good in this role, he never shows any emotion which is needed for the character who has lost everything. Mary McCormack is solid but her character doesn’t get enough development.

Story – The story is one that asks the moral questions about drone pilots and victims of their attacks as well as offering a suspenseful revenge story. the problem with the story is that is doesn’t get going quick enough because we clearly know where it is going, so why hold us back? There is also another glaring problem with this film and that is making Imir come off as villain, when it was clearly the American that committed the villain act first, but the final moments of the film do make everything important in the message.

Thriller – The final third of this film does keep you on edge throughout the film but getting to that stage does seem to take a while.

Settings – The settings do show us that the two men have similar lifestyles, they work hard and raise a family, but the cultures see things differently and this causes the conflict in the film. 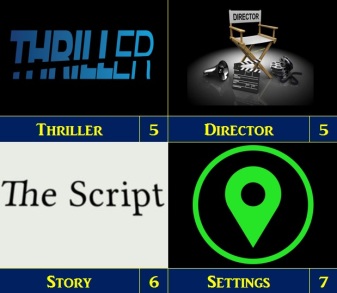 Final Thoughts – This is a very slow thriller which could have been so much better, but it does have a good message by the end of the film.