Plot: A vengeful barbarian warrior sets off to get his revenge on the evil warlord who attacked his village and murdered his father when he was a boy.

Story: Conan the Barbarian starts by filling us in with all the information we need about what will drive this story as we know the necromancers would bee conquered by the Barbarian tribes who each go their separate ways with part of the skull that will help take over the world. Prophecy proclaims that one day one man will try to reunite the skull collect th true power and that one person will be born in battle. Conan still in his mother’s womb as she is stab gets freed by his father Corin (Perlman) before she dies. Time for a training session that gets real where Conan shows off his real power as just a boy. When Khalar Zym (Lang) and his men attack the village Corin is murdered for his tribes part of the skull mask.

Now fully grown Conan (Momoa) takes on slavers and pirates alike as he searches for the man who killed his father. Conan finally gets a chance to meet one of the soldiers who was involved in the attack where he learns of Zym and his plan. Zym is after a pure girl named Tamara (Nichols) to complete his transcendence to become a true God and along with his daughter Marique (McGowan) he knows where to look. Conan saves Tamara and uses her to get to Khalar Zym so he can finally get his chance and revenge fr his father’s murder.

Conan the Barbarian brings us the a remake to the cult classic and brings a much darker tone to the story. We have plenty of violence but a large amount seems to be on the horses (which I know is fake) but feels very unnecessary. The story has change slightly but the main idea of revenge for the death or family stands firm. I do feel the whole story is very dark and lets the violence happen making the barbarian look stronger throughout. I don’t think the villain comes off as bad as the original one because we don’t see enough evil from him before the final battle. This isn’t the most amazing film but in the end brings a new flavour to the classic. (6/10)

Jason Momoa: Conan is the fearless warrior, deadly as they come who is fuelled with vengeance after his father is killed by Khalar Zym. He can slay countless enemies to free the slaves. Jason comes into this role fresh off the back of the Game of Thrones Drago bring his strong screen presence to this role. (7/10)

Stephen Lang: Khalar Zym is the warlord who became a king but is planning to become a God once he gets his hands on Tamara. He is deadly in combat and along with his daughter Marique stays one step ahead of his enemies. Stephen brings us a good villain but I do feel we needed a lot more from his character. (6/10)

Rachel Nichols: Tamara is the pure blood who has become the problem of being wanted by Zym and Conan so the two can end their battle. Rachel brings us the basic damsel in distress role but not much else. (5/10) 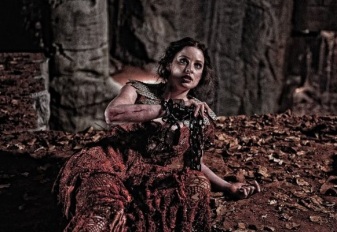 Ron Perlman: Corin is Conan’s father and might warrior leader of his tribe, he has taught Conan a lot but still believes there is more that he could learn. When his village gets over run and captured by the evil Khalar Zym he must make the sacrifice to save his son from death. This is a typical Ron Perlman performance where he is a strong in a supporting role. (7/10) 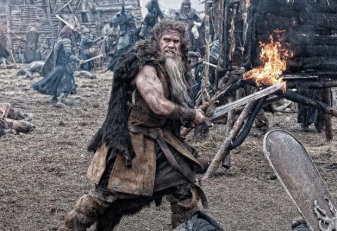 Rose McGowan: Marique is the mystical witch daughter of Zym who helps him discover everything he needs, she can sense pure bloods and uncover items but she also isn’t afraid to kill when she doesn’t get her way. Rose brings us an almost unrecognisable performance that shows she can play both sides of the coins. (7/10)

Support Cast: Conan the Barbarian has a supporting cast that all become generic sidekick characters who always turn up when needed as well as the villainous foes that the Conan takes on to get to Zym.

Director Review: Marcus Nispel – Michael gives us a solid remake with plenty of action throughout the film. (6/10)

Action: Conan the Barbarian has action in nearly ever scene with Conan raking up a body count along the way. (8/10)

Suggestion: Conan the Barbarian is one for the action stars to try because it will end up having good moments but in the end if you a fan of the original you might not enjoy this one. (Try It)

Chances of Sequel: It is being remade with Schwarzenegger.

Tagline: Enter An Age Undreamed Of

Overall: Darker, slicker but not the classic you want to see remade

Plot: A vengeful barbarian warrior sets off to avenge his tribe and his parents whom were slain by an evil sorcerer and his warriors when he was a boy.

Story: Conan the Barbarian starts with the message ‘What doesn’t kill you makes you stronger’. We start by meeting a young Conan being told the stories about the Gods and man’s battles and how the secret of steel. We see the soldiers lead by Thulsa Doom (Jones) destroy young Conan’s village killing everyone leaving Conan the only survivor. The children are all forced into slavery and it is here where Conan (Schwarzenegger) becomes a man.

Conan is used in fights due to his considerable size and strength where he gets trained in the art of combat where he stays loyal to his steel respect. When Conan gets set free of his slavery demands he starts his own quest to avenge his parent’s death. Along the way Conan meets a string of characters that help and hinder his journey but most off all test him. Conan befriends himself with Valeria (Bergman) and Subotia (Lopez) where they start to become the most notorious thieves in the land. The reputation growing the group gets given a quest by King Osric (Von Sydow) to retrieve his daughter from the Thulsa Doom for as much as they can carry.

Conan the Barbarian really does fill the tick boxes needed for a good adventure film, we get the unlikely friendships out to stop an evil leader. We get the idea of a cult like leader which makes his army deadly because they will die to protect him, we also end up going through the whole slave to a king storyline around Conan. The story is easy to follow because everything just unfolds and the narration keeps everything that would be difficult to film informing us the important information. This is what you would expect it to be easy to watch action film so just enjoy. (7/10)

Arnold Schwarzenegger: Conan is the slave who gets his freedom where he becomes a thief before entering on a quest that will end up putting him on a path for revenge against the man who killed his parents. Arnold continues to show why he continued to reach the next levels in the acting world with this role. (7/10)

James Earl Jones: Thulsa Doom is the leader who killed Conan’s parents before putting him into slavery, he leads an army that’s only desire is to die fighting for him but little does he know what type of man Conan has turned into. James does a good job in the role showing his talents shining through in the villainous role. (7/10)

Sandahl Bergman: Valeria is a fellow thief that becomes a love interest of Conan as they both get the chance to collect their biggest pay day as he goes for revenge. Sandahl does give a solid performance as the warrior like fellow fighter. (6/10)

Support Cast: Conan the Barbarian has a large supporting cast that fight both for and against Conan which gives us the sidekick characters needed to make Conan stay on the serious side of the film.

Action: Conan the Barbarian is filled with combat scenes that keep becoming large and more important as the film unfolds. (8/10)

Adventure: Conan the Barbarian puts our characters on a quest that will take them across the land to fight against the enemies. (8/10)

Fantasy: Conan the Barbarian puts us into a fantasy world with certain beliefs from start to finish. (8/10)

Suggestion: Conan the Barbarian is one to try, I personally felt it was a little bit too long but otherwise it is all fun. (Try it)

Chances of Sequel: Has a sequel and a remake

Tagline: He conquered an empire with his sword. She conquered HIM with her bare hands.

Trivia: James Earl Jones was a last minute addition to the cast because of his commitments on Broadway. He and Arnold Schwarzenegger became friends on-set; Schwarzenegger helped Jones stay in shape and Jones coached Schwarzenegger on acting; so did Max von Sydow.

Overall: Conan is an enjoyable adventure that can still be enjoyed over 30 years later.