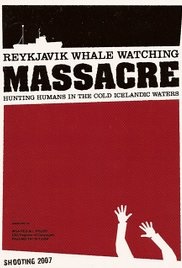 Plot: An epic tale about a group of whale watchers, whose ship breaks down and they get picked up by a whale fisher vessel. The Fishbillies on the vessel has just gone bust, and everything goes out of control.

Story: Reykjavik Whale Watching Massacre starts with opening credits showing whaling which is very difficult to watch to say the least. We move to meet our characters Annette (Viitala), Endo (Nae), Marie-Anne (Hennessy) and many other nationalities as they are preparing for a day of whale watching of the coast of Iceland.

The peaceful whale watching trip is about to turn into a nightmare when the Captain Petur (Hansen) gets killing in an accident, but this is only the beginning as they are left as bait for Tryggvi (Bjornsson) and his team of whalers that kill any tourists instead of whales.

Reykjavik Whale Watching Massacre gave me the feeling of the Hostel in Iceland, it does have some random sides to the story because we never really learn the motives of the killers, or why the man is acting retarded. The characters are slightly generic with Marie-Anne really confusing me because she should be a character you feel her pain but they turned her into a complete bitch in the final act of the story. This does have good parts because some of the kills are shocking but in the end it feels just like another splatter based film.

Pihla Viitala: Annette does go through a lot in this film, she starts off being the last to arrive on the boat injuring herself getting on the boat, where she ends up almost being rapped, before they get captured where she becomes the target of the most deranged of the killers. Pihla is good having gone through everything she does.

Nae: Endo is the assistant to a Japanese business couple who gets treated badly by her boss. Once captured she becomes one of the hardest to capture by the killers. Nae is good giving us a very interesting character through the film.

Miranda Hennessy: Marie-Anne is on this trip in memory of her late fiancée as they trip would have been her honeymoon. She comes off as the responsible one on the trip as she is using it as time to grieve. Miranda is good but her character is so confusing as she should be the leading character with the sympathy for what has happened but they turn her into the asshole character.

Support Cast: Reykjavik Whale Watching Massacre has a supporting cast that are just the disposable characters for the killers.

Horror: Reykjavik Whale Watching Massacre is a splatter filled horror that is filled with gore throughout.

Suggestion: Reykjavik Whale Watching Massacre is one to try, I do feel like the horror fans out there will enjoy this one. (Try)

Kill Of The Film: French Guy.

Tagline: The catch of the day … is you. 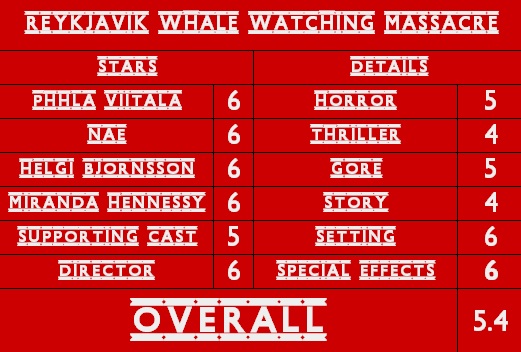 Plot: Hansel & Gretel are bounty hunters who track and kill witches all over the world. As the fabled Blood Moon approaches, the siblings encounter a new form of evil that might hold a secret to their past.

Grown up Hansel (Renner) & Gretel (Arterton) are known as the witch hunters going from town to town to defeat whatever witch is haunting the villagers. Sheriff Berringer (Stormare) is hunting a witch in his town and Hansel & Gretel are bought in by the Mayor to find the witch leading to the instant tension between the two parties. The Sheriff decides to hire his own team to find the witch but she does one better, Muriel (Janssen) finds them and makes quick work of them.

Hansel & Gretel: Witch Hunters takes an old story we all have heard before and makes it a all grown up version. I like the idea of see what happened when the pair grew up but sadly that is the only real positive I could find in this film. The fact that the action scenes are nearly all identical with running through the woods or the town followed by Hansel or Gretel getting pretty much battered before pulling of something as a pair to defeat the enemy makes me wonder how they have lasted this long. The witch’s motives seem like a very similar take on what ‘The Brothers Grimm’ film had going on and the attempted twists are easier to read that a Dr Seuss book. I felt very disappointed with the lack of originality in this story because I feel the idea has a lot of potential. (4/10)

Jeremy Renner: Hansel the brother of the pair who is very much the jump in head first kind of guy, he does spend a lot of time running through the woods but is loyal to Gretel until the end. Jeremy does a solid job and takes his beatings well, but never gets to show any of his acting abilities through this film. (5/10)

Gemma Arterton: Gretel the brains of the act who uncovers what is really going on, she is much more patient than Hansel but can handle herself in a fight. Gemma has the look of a sexy witch hunter but really that is all. (4/10) 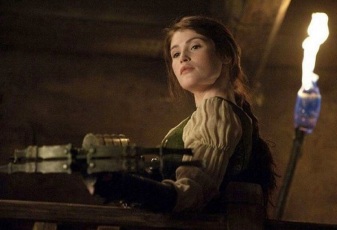 Famke Janssen: Muriel the evil witch who is out to become the most powerful indestructible witch of all time. She is already more powerful than anything the two have faced before. Famke does a solid job in the villainous role but really doesn’t get a chance to be as evil as her character requires. (5/10)

Support Cast: Hansel & Gretel: Witch Hunters has a supporting cast that includes the fellow witches out to complete the ritual, it also has the towns people who are scared of what is happening.

Director Review: Tommy Wirkola – I have to say I like Tommy’s work on the Dead Snow films but this seems like it tries too hard to make something extra happen and forgets to make the simple happen. (4/10)

Action: Hansel & Gretel: Witch Hunters has plenty of running, getting beaten up, shooting and missing that it takes over the whole story with all easy action. (6/10)

Fantasy: Hansel & Gretel: Witch Hunters takes us into a fantasy world of witches but tries to keep things real, which doesn’t always work. (6/10)

Horror: Hansel & Gretel: Witch Hunters doesn’t really end up being that much of a horror we have some very good effect used on the kills but nothing truly horror. (4/10)

Suggestion: Hansel & Gretel: Witch Hunters is one to watch late night television when nothing is on and you feel like trying it. (Late Night TV)

Action Scene Of The Film: Attacking the witches.

Chances of Sequel: Open for one.

Overall: This is a lacklustre addition to the action horror genre that really doesn’t know which genre it wants to be and falls flat on its face.