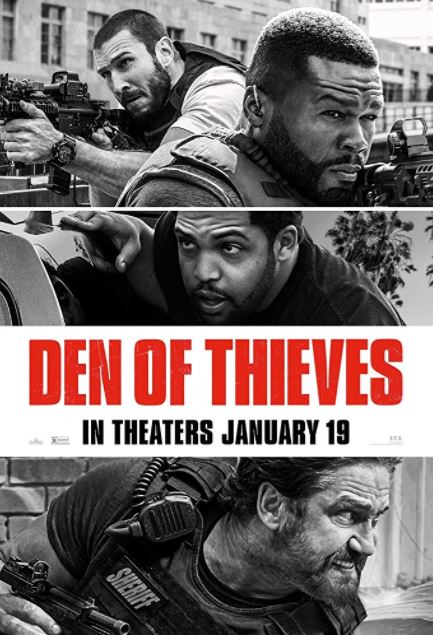 Plot: A gritty crime saga which follows the lives of an elite unit of the LA County Sheriff’s Dept. and the state’s most successful bank robbery crew as the outlaws plan a seemingly impossible heist on the Federal Reserve Bank.

Story: Den of Thieves starts as we see how Merrimen (Schreiber) operates with his team, second in command Enson (50 Cent) and new comer driver Donnie Wilson (Jackson Jr) as they pull off their latest job, investigating this is major crimes officer Big Nick O’Brien (Butler) and his team, they don’t take prisoners, they take bodies.

After the opening heist the two sides know their enemy and Nick brings Donnie in to bring in to learn the plan, while Merrimen is planning the biggest heist ever heard off, the Federal Reserve Bank, will they manage to pull this off.

Thoughts on Den of Thieves

Characters – Big Nick is the leader of a major crime unit that is suffering with his own addiction, he goes outside the law to get answers and never plays by the rules, he is a good leader and seems to be the only cop in town that can think outside the box. Ray Merrimen is the leader of the heist team, former marine and prisoner that plans his heist down to perfection with his team, he will not go down without swinging. Donnie is the newest member of the team, hired for his driving skills, that he gets forced to work both sides by Big Nick or face jail for a third time.

Performances – Gerard Butler is on fine form here, this could easily be his best performance in years, yes this isn’t anything he can’t handle, but still he knows how to handle it. Pablo Schreiber is an actor I hadn’t heard off before, he does a good job opposite Butler, but his performance does feel like he needs to be a strong member of a team over the leader. O’Shea Jackson Jr is good in his role showing that he is going to be a name for years to come.

Story – The story follows both sides of the law, the team preparing the heist and the police trying to figure out what the next target is. This work because we get to see both mindsets, but as both sides of the law are being painted as bad guy it makes it hard to support either side of them and this is affected with the opening sequence too. The twists that come in the story are going to be something that are not going to be too difficult to point out. This does however become an entertaining viewing experience.

Action/Crime/Mystery – The action sequences are very good, even if they are mostly big gun battles in the busy streets. The crime side of the film is how the heist unfolds which does help with the mystery side of the film as we see how it all unfolds.

Settings – LA is the setting, which is meant to have the highest bank robbery rating in the country, this works for the busy streets and divide between the sides of the city.

Special Effects – The effects are very good when it comes to showing off the bullet effects which are brutal as you could imagine.

Scene of the Movie – The final heist, it might be long, but it is edge of you seat.

That Moment That Annoyed Me – The opening sequence ruins us caring about the thieves.

Final Thoughts – This is a good gritty heist movie, it rolls past with an over two hour run time and keeps us guessing until the final scene. 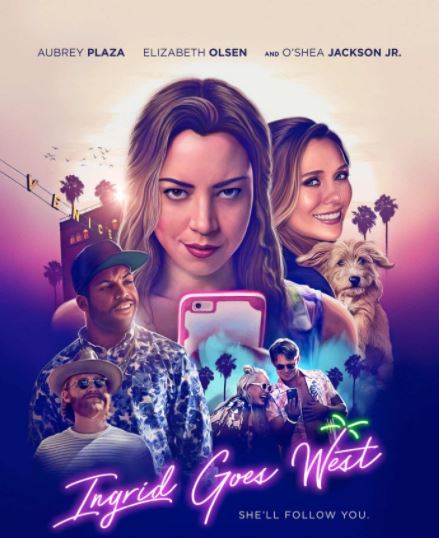 Plot: An unhinged social media stalker moves to LA and insinuates herself into the life of an Instagram star.

Story: Ingrid Goes West starts as we meet Ingrid (Plaza) a social media fanatic who shows the extremes she goes to become part of the celebrity’s life, but freshly out of the mental home, she now targets her newest celebrity obsession Taylor Sloane (Olsen).

Ingrid moves west to LA to be closer to Taylor after getting a reply from Taylor on social media, renting a place of Dan Pinto (Jackson Jr) she gets to grips with the LA life style. We see how Ingrid learns where Taylor lives and decides to dognap her dog, so she can become the hero in Taylor’s eyes. The two become friends where the two share secrets and now Ingrid has everything she wanted in her social media obsession, but when things go in the direction against Ingrid’s wishes, we see the unstable side of things.

Characters – Ingrid is an unstable young woman that is obsessed with celebrities on social media, her latest one left her in a mental home but fresh out she dives right back into social media locating her new obsession. Using the money she received from her mother’s death she heads to LA to get close to her latest obsession, when she soon becomes friends with her but are we prepared to see how far she will go. Taylor is the social media icon, she shots every moment of her life for her followers who feed her desire to be popular giving her the attention she requires, we learn that not everything she speaks is the truth making her just as fake as the followers that she has. Dan is the local screenwriter that gives Ingrid a room to rent, his is obsessed with Batman becoming one of the only natural friends Ingrid meets.

Performances – Aubrey Plaza is fantastic in this leading role, she plays the fine line between normal and unstable while being the social awkward stalker she needs to show us. Elizabeth Olsen is great as the social media diva that craves the attention. She gives us a truly believable performance as a woman that relies on social media for her attention. O’Shea Jackson Jr is good in the supporting role playing a down to Earth character throughout the film. Wyatt Russell and Billy Magnussen are both great in the supporting roles too.

Story – This is the story of the darker side of social media, it shows both how the people on it can be fake, but it can also create the stalker mentality behind the people who follow people on social media. We get to see how this has become a new problem in the world and how the mental unstable will struggle to cope with the rejection with the popularity they crave. This story is a great watch, it is powerful throughout the film, it tells a powerful message about the dangers of social media both for the people sharing and following.

Comedy – The comedy in this movie fits what the movie drama tone without making is completely dark, we do have dark moments of comedy and not full-blown laugh out loud moments.

Settings – The LA setting works for the film because it shows how people in the area can be drawn into obsession.

Scene of the Movie – Punch Me.

That Moment That Annoyed Me – It is hard to find anything that I didn’t like here but the one moment would be, Ezra, I believe we could have had one more moment with him.

Final Thoughts – This is easily one of the films of the year, it tackles a serious matter and entertains throughout with powerhouse performances.

Overall: Contender for the film of the year.

Plot: The group NWA emerges from the mean streets of Compton in Los Angeles, California, in the mid-1980s and revolutionizes Hip Hop culture with their music and tales about life in the hood.

Story: Straight Outta Compton starts by introducing us to all our five main players and where they are at their life early on Ice Cube (Jackson Jr), Eazy-E (Mitchell), DJ Yella (Brown Jr) and MC Ren (Hodge), each one of these dreams of being more and they all have talent but the neighbourhood they are in makes this difficult for them. Dr Dre (Hawkins) is the well-respected popular rapper from the neighbourhood who continues to live around looking for new music.

When Eazy-E meets Jerry Heller (Giamatti) he offers to take a chance on the NWA promising to take them to the main stream. With NWA taking the world by storm we see the early divides within the group as they all look to make something for themselves but Gangster Rap becomes the biggest thing in America.

The rivalries between the crew becomes clear when Ice Cube goes solo and the rest of the NWA learns that not everything is as clear as they believe it to be as they all want to become the main attraction in the industries which will lead to devastating consequences.

Straight Outta Compton is a film that surrounded the Oscars as one of the missed opportunity to be diverse but watching it I found myself thinking it didn’t deserve to be in the Oscar contention. This doesn’t help that I am not a big fan of the style of music or the attitude this can give show people from the neighbourhood to be. The other use of the ‘N’ word throughout the film gives us what can be seen as the problem with a racial divide. The story off the rise of a small-time rap group is interesting and seeing how they got divided but remain respectful but are the only ones who know what they need to do to get out of the trouble making neighbourhood.

The acting is all top notch from what is nearly all an unknown cast at the time in the NWA roles even with the heavyweight performance from Giamatti ones again. I will say this film is too long because we spend well over an hour just dealing with the parties but the interesting side of the story comes from the divide and consequences between these now icons of music.

Overall: Great look into the world even if it is over glamorising certain points of the careers.