Plot: Hell’s Kitty is a comedy horror series based on the true life events of Nick, a Hollywood writer, and Angel, his possessed and very possessive pussycat.

Story: Hell’s Kitty starts as we meet screenwriter Nick (Tana) that lives with his cat Angel, he hasn’t had work in a while and struggles to find a woman, with his latest date ending badly when Angel attacks the woman.

Searching for help he starts seeing psychologist Dr Laurie Strodes (Kate) and along with his neighbour Adam, the three must come to the bottom of whether the cat is evil or Nick is losing his mind.

Characters – Nick is an everyday struggling screenwriter, he lives with his cat and struggles to get into a relationship, when he tries he ends up needing to cover up the cat’s kills as she doesn’t want him to see other people. As the bodies pile up and the different resources come up short, we learn more about the truth behind the problems in Nick’s life. We get a host of supporting characters here, we have the neighbour who loves horror, the psychologist, the priests and many others each referencing’s a different horror movie.

Performances – Nick is in the leading role of the film, he does a good job with his reaction and storytelling, the cameo like performances from the icons of horror are good throughout the film, this does help with the comedy too.

Story – The story puts us in a world where one man finds his life being thrown upside down by his cat that is killing people that she sees being friends with Nick. The idea is farfetched, but this is movie right? This plays into horror moments which are references from previous horror movies which is fine and gives us an acceptance to this story being tongue in cheek.

Comedy/Horror – If you are a horror fan, you will get the comedy references going on the film, most hit, but it does takeaway from the horror limits in the film.

Settings – The film is set in the apartment of Nick’s which works because it shows the different people that comes into the life that could become the next victim.

Special Effects – The practical effects are done really well, it is the moments that require CGI that show the budget of the movie.

That Moment That Annoyed Me – The CGI effects.

Final Thoughts – This is a good horror that does pay a lot of respect to horror movies of the past, we have a story that works in the horror comedy genre only and it will keep you guessing.

Overall: Horror fans will get a kick out of this.

Plot: A criminal pleads insanity after getting into trouble again and once in the mental institution rebels against the oppressive nurse and rallies up the scared patients.

Story: One Flew Over the Cuckoo’s Nest starts as we see R.P. McMurphy (Nicholson) entering into the mental institute and on the ward run by Nurse Ratched (Fletcher). On the world McMurphy meets all the patient that all have different problems but McMurphy runs his mouth with his confident mood that sees him trying to help the fellow patience including Martini (DeVito), Taber (Lloyd), Billy Bibbit (Dourif) and Chief Bromden (Sampson).

McMurphy clashes with Nurse Ratched as he tries to teach the men to stand up for themselves which shows that McMurphy really isn’t as insane as he is coming off.

One Flew Over the Cuckoo’s Nest is one of the all-time classics that has avoided me for years, I have no idea why it has taken be this long to watch but is has now happened. Going into this film I knew the ending which wants the best thing to know but the building up to that was something I was unaware off. I found that the time in the institute really works well because we see how the time spent in the institute we see how McMurphy tries to help patients. In the end this is one of the best films ever made which is why it really it still stands the test of time 41 years later.

Jack Nicholson: R.P. McMurphy is a criminal that claimed insanity ending him up in the mental institute, we clearly see that he shouldn’t be in the ward but because he is committed he sees this as an easy way out only to find out that it isn’t going to be an easy trip. While in the ward he is tries to help the actual patient with their problems getting through to them on a level the doctors never could. Jack gives his best performance of his career that rightfully won the Oscar.

Louise Fletcher: Nurse Ratched runs the ward that McMurphy finds himself on, she has all her patient in line but when McMurphy arrives her life becomes difficult as she clashes with him, she actually stands up for keeping McMurphy in her ward but she has an alternative motive behind this choice. Louise is brilliant in this role where she won the Oscar. 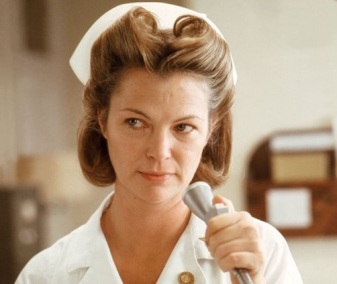 Danny DeVito: Martini is one of the patient that McMurphy helps, he comes off as the one man that looks up to McMurphy as a big brother learning all his bad habits. Danny shows that he going onto be a bigger star in the future.

Christopher Lloyd: Taber is one of the fellow committed patients in the ward, he is one of the men that McMurphy starts to help as we see him change over time. Christopher is great in this supporting role.

Brad Dourif: Billy Bibbit is one of the patients that has a nervous side that tries to learn about to put that uncertain side about him behind him. Brad gave us a brilliant supporting role that got him an Oscar nomination.

Will Sampson: Chief Bromden is the patient that everyone thinks is deaf and dumb, but with McMurphy trying to bring him out his shell by talking to him as a human rather than a problem we get to see what he is all about. Will gives us the most interesting character in the film as the silent man early on.

Support Cast: One Flew Over the Cuckoo’s Nest has a brilliant supporting cast that all shine through the film.

Director Review: Milos Forman – Milos gave us one of the best films ever made.

Drama: One Flew Over the Cuckoo’s Nest will always be one of the best dramas of all time.

Settings: One Flew Over the Cuckoo’s Nest keeps most of the film inside the Mental home but the one time outside really works to shows us the different life the men could have.

Suggestion: One Flew Over the Cuckoo’s Nest is one that everyone should watch. (Watch)

Tagline: If he’s crazy, what does that make you?

Overall: One of the true all time classics from Hollywood