Plot: The lives of a young couple intertwine with a much older man, as he reflects back on a past love.

Story: The Longest Ride starts by making me feel like this is going to be a shallow feel because the selling point for Sophia (Robertson) to go and watch bull riding is ‘hot guys’ when she clearly doesn’t want to go. To the surprise of us all Sophia meets handsome rodeo Luke (Eastwood) and enjoys herself, well boy this is going to be a hard watch.

When Sophia and Luke go on their first date they find Ira (Alda) who has had a car accident and the pair save his life and his box of memories. Sophia becomes friends with Ira (Alda) as she learns of the young love he once had.

As Sophia and Luke learn about Ira’s love story theirs blossoms even though they both know they will be going in their separate ways.

The Longest Ride gives us yet another one of these fictional love stories that would never happen but give people the unrealistic belief that it could. The only good part of this film is the flashback relationship that has the struggles going on throughout it. The leading love story is all about what you would give up for love and then boom easy happy ending no struggle to make things work between to pretty people, you know the type that annoys you.

Britt Robertson: Sophia is a college student about to start her dream job in New York when she meets a professional bull rider. Her life is thrown upside down when she falls in love and torn between her lifelong dream or the man who has never made her feel like this before. Britt is good in this role playing you typical dream filled romantic character.

Scott Eastwood: Luke is the professional bull fighter who has suffered a serious accident before he meets Sophia. He will not give up the ‘sport’ he loves even for the girl that changes his life. He is very traditional in how he goes about his relationship but also not willing to learn something else to get away from bull fighting. Scott is the highlight of this film where we see him make a name for himself in a leading role.

Alan Alda: Ira is an elder gentleman that the two rescue from a car accident and who Sophia turns to for all of her advice when she learns of the love story he went through. Alan is solid in this role where we get to see him in a narration style role.

Support Cast: The Longest Ride has a supporting cast with Jack Huston and Oona Chaplin playing the younger couple in the flashbacks who really shine above the rest.

Director Review: George Tillman Jr – George gives us a good date movie but characters who are written to be too over the top and unrealistic doesn’t help the story.

Romance: The Longest Ride gives us an unrealistic love story that is about two people coming from different worlds and what they will would give up for love.

Chemistry: The Longest Ride doesn’t have the biggest spark between the lead couple which takes away part of the film.

Overall: Unrealistic story about love which will pull people in.

Plot: An account of Boston Police Commissioner Ed Davis’s actions in the events leading up to the 2013 Boston Marathon bombing and the aftermath, which includes the city-wide manhunt to find the terrorists behind it.

Story: Patriots Day starts as we meet Tommy Saunders (Wahlberg) a police officer dealing with consequences of his past which has seen him needing to walk the beat on the latest Boston Marathon to get himself out of the dog house with Commissioner Ed Davis (Goodman).

Patriots Day arrives as we see a host of people getting prepared for the marathon including Tommy, Sergeant Jeffrey Pugliese (Simmons) and the Tsarnaev brothers Dzhokhar (Wolff) and Tamerlan (Melikidze).

With the marathon, underway and the celebrations started the Tsarnaev brother arrive to turn this celebration into a tragedy that shocked the world by placing bombs on along the finishing straight. With the chaos of the scenes the police and rescue teams work to help as many people as possible before a nationwide manhunt searching for the brothers who the police are unaware of as they work with the FBI led by Special Agent Richard Deslauriers (Bacon).

Story – This is the story of the aftermath of the Boston Marathon bombings as we see how the police, FBI and city of Boston come together to search for the terrorists behind the crime. So the story is well known but the details behind everything is truly shot here to near perfection keeping you on edge from the opening sequence to the conclusion at this is over 2 hours long. The story telling process within this film is easily one of the most intense thrilling experiences you will have all year long.

Drama/History/Thriller – This will always be known as one of the most successful capture of domestic terrorists within America even though we have the tragic loss of life. This is easily one of the most thrilling stories you will see this year because it literally just doesn’t stop.

Characters/Performance – Each character is based on the real people involved the ones that were victims, the police officers hunting the suspects, the suspects themselves and even the political members involved trying to do the right legal side of the story, it would be unfair to question any of the characters within the film because they are real. The performances are all fantastic fulling portraying the people who were involved in the tragic event.

Settings – The settings re-create the Boston streets for the events with each looking just like it was everyday scenes, we see the peace before the events and the aftermath of the attack.

Final Thoughts – This is bar far one of the best thrillers we have had on the modern day true stories and true 2-hour edge of your seat thriller.

Plot: A promising young drummer enrols at a cutthroat music conservatory where his dreams of greatness are mentored by an instructor who will stop at nothing to realize a student’s potential.

Story: Whiplash starts by introducing Andrew (Teller) a brilliant drummer caught in the act playing on a drum set by Fletcher (Simmons), only a first year student at Shafer School for Music. Andrew proves to be a very determined young man making sure he gets into extra practise. Andrew’s practise pays off when Fletcher gives him a shot in his class. Fletcher is the strictest teachers in the school and Andrew gets to witness first hand to just cut throat he is when he finds a problem with the players.

After a nightmare experience where Fletcher embarrasses Andrew in-front of the entire class, Andrew decides to put in extra practise to learn the ‘Whiplash’ music. During the first competition Andrew gets his chance to be part of the band after the lead drummer makes a huge mistake in the eyes of Fletcher. This performance leads to Andrew getting the lead seat on the drums in the band. Andrew struggles receive the praise and encouragement from him own family for all the work he has achieved. Andrew ends up sacrificing everything he can to make it in the band even if it means giving up morals. As the story unfolds we learn about the results in Fletcher’s methods and that it is getting investigated with Andrew being the choice the make something change and expose the methods. Ultimately Andrew wants to prove he is as good as his potential has shown even though he clashes with Fletcher on every decision.

Whiplash asks the question how can film about jazz music drumming be interesting to none jazz fans. What Whiplash does is make the music seen intense you literally don’t know what Fletcher will do next. We have seen the idea of going to unbelievable levels to achieve being the best in a range of subjects before but I struggle to find one that has such conflict between student and teacher before. I enjoyed the idea that Andrew’s obsession with his dream takes over his life leaving him pushing any social life out of the window to become the best. The idea of seeing how hard the students would have to work to become the best and showing how willing they are to give up anything for that dream. Even if the subject isn’t for you, you have to see this amazing story. (10/10)

Miles Teller: Andrew young drummer who wants to be the absolutely best drummer, he goes to extra lengths to make sure he is the best. He has to overcome a perfectionist teacher as he looks perfect his art. Miles gives a brilliant performance that could really be his breakout role. (10/10) 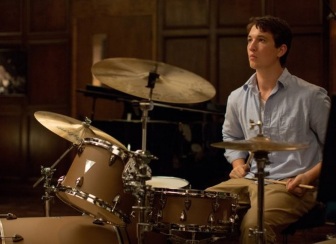 J.K. Simmons: Fletcher strict perfectionist teacher who is after the best of the best in his band. He rips his students apart to make them the best and to get rid of the weak. Simmons gives an absolutely stunning performance that is so unpredictable you just won’t know what he will say or do next. (10/10)

Support Cast: Whiplash doesn’t have much a supporting cast, the ones we meet are only there to show how much Andrew will give up or the band members that Fletcher has on edge because of how hard he pushes them.

Drama: Whiplash uses the unfolding story to create the drama side of the story, it makes it one of the most interesting films even if it comes off as a rather boring subject. (10/10)

Music: Whiplash enters into the world of music to pull us in and never lets us go, every time we see the drums in action we give our full attention. (10/10)

Settings: Whiplash uses the school and concerts as the main locations used and this helps show the work behind the scenes before seeing the work in practise. (10/10)

Suggestion: Whiplash is a must watch, I don’t really need to say much else than you have to see this. (Must Watch)

Worst Part: The non-music scenes though important just are not the same.

Favourite Quote: Fletcher ‘Get the fuck out of my sight before I demolish you’

Believability: To achieve greatness people may go through this much. (5/10)

Awards: Nominated for a Golden Globe.

Oscar Chances: Could get a lot of nominations.