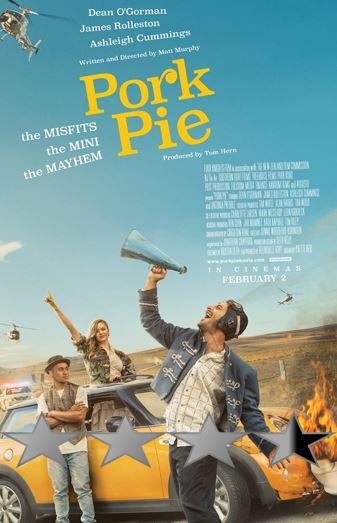 Plot: Pork Pie tracks the escapades of a trio of accidental outlaws as they travel the length of the New Zealand in a yellow mini, protesting conformity and chasing lost love, with a posse of cops and a media frenzy hot in their pursuit.

Tagline – The misfits. The Mini. The mayhem.

Story: Joyride starts when Luke (Rolleston) steals a mini escaping from thugs, he nearly hits author who is travelling across New Zealand for a wedding Jon (O’Gorman) and on their journey they pick up feisty young woman Keira (Cummings) as they are running from a past they can’t control.

As the three bond they each reveal why they are on the journey and they three start to guide each other through their problems and their causes, all while evading the law.

Characters – Jon is trying to crash a wedding, not to steal the bride or anything, to try and make up with his ex, who he left at the altar. He wants to make up for everything, though he doesn’t know how to go about it. Luke is the young man who stole the car, he is on the run from some thugs, while dealing with his own loss, he needs somebody to be there for him. Keira is an animal activist that works in a fast food restaurant she joins the guys after learning they are travelling towards a protest, she wants to be part of, showing that she is planning to us the incident to make an impact. Susie is the ex of Jon that was left at the altar, she doesn’t anything to do with Jon, however much he tries to come back to her.

Performances – Dean O’Gorman and James Rolleston are both good in their roles in the film, they manage to have good chemistry and handle the emotional sides of their story too. Ashleigh Cummings completes the main line up with her performance equalling theirs.

Story – The story shows an unlikely trio travel across New Zealand for different reasons, as they travel they must help each other with their problem as they become outlaws through the country. This does feel like a coming of age movie with the Luke character, a sort your life out movie for Jon and learn about yourself movie for Keira, the three stories mix together to show us how adventure can bring new meaning to life. We get the emotional levels required to make you laugh and cry which can be hard to achieve. This is a story that will stick with you without being one that gets bogged down with too much going on.

Action/Comedy/Crime/Romance – The action comes from the car chases around the country which are entertaining and like many films include minis. The comedy comes from moments the three go through trying to escape, which shows how the crimes they are committing will only make things worst for the group. The romance is motivation for Jon which shows just how far he would go for love.

Settings – New Zealand is the backdrop for the movie which shows us how beautiful the country is and how driving across it can be achieved.

Scene of the Movie – The final car chase.

That Moment That Annoyed Me – The love story takes over too easily.

Final Thoughts – This is a fun film that balance three stories well at times before falling slightly short with concluding a couple of them as well as it should.