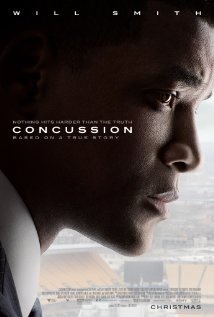 Story: Concussion starts as we meet Nigerian Doctor Bennet Omalu (Smith) a pathologist who has a slow method when he examines the dead, his boss Dr Cyril Wecht (Brooks) wants him to become more traditional quicker. We meet former NFL star Mike Webster (Morse) who has been struggling since retiring as have his team mate Justin.

As Bennet opens his doors to Prema (Mbatha-Raw) a successful African looking for a start in America, we see how Mike is falling further into a mess as his Dr Julian Bailes (Baldwin) is running out of ideas before he finally dies. Bennet is assigned to figure out why this once hero has died to give the how state a final answer to what happened. What he learns could change sports from a medical stand point forever.

Concussion shows how one sport can cause so many issues later in their life. We get to see how a neutral was the one person that was willing to push the limits against the NFL. We get to see how to see how the players are getting ill moments before their deaths. We don’t get into the NFL side enough as we only focus on Bennet’s story which is slightly disappointing. This is an important story because it shows yet another cover up in America

Will Smith: Dr Bennet Omalu is the Nigerian pathologist living and working in America, when one of his town’s favourite players dies he is assigned to examine the body, while examining the body he learns about the brain damage the NFL players are suffering from which could easily change the game forever. Will gives one of his best performance in many years here.

Alec Baldwin: Dr Julian Bailes is the former NFL doctor who couldn’t understand why he former players were acting the way they were. Once Bennet releases his research he teams up with him to turn his much loved sport into something safe again. Alec gives us a great performance in this role.

Albert Brooks: Dr Cyril Wecht is the head of the hospital in which Bennet works, he lets Bennet take these chances to make sure he can protect further injury even if it puts his own career in danger. Albert gives us a good performance which is perfect in the supporting role.

Gugu Mbatha-Raw: Prema is the young African woman who comes to live in America where she gets asked to live with community man Bennet, over time the two fall in love which makes her the strong part whenever Bennet is feeling weak. Gugu is good in this role without being anything special.

Director Review: Peter Landesman – Peter gives us a good film exposing the truth about a sport that many people in the world enjoy.

Sports: Concussion shows the affects playing the sport could have on a human body.

Settings: Concussion doesn’t make too much out of the settings with none being anything memorable to the final story.
Special Effects: Concussion uses the effects to show how the affects happen to the brain.

Suggestion: Concussion is one to try, it is good to see how sports can be dangerous to the people playing. (Try It)

Worst Part: NFL side of the story.

Believability: Based on what happened and how the sport was changed.

Tagline: Even Legends Need a Hero

Overall: Solid sports drama that doesn’t go into the real depths of the battle.

Plot: A newly divorced woman falls for a younger man who has recently moved in across the street from her, but their torrid affair soon takes a dangerous turn.

Story: The Boy Next Door starts by showing the details of Claire (Lopez) and her divorce from Garrett (Corbett), she has been getting through it with her friend Vicky (Chenoweth) but to make thing difficult Claire wants to do the right thing for their son Kevin (Nelson). Claire meets her new neighbour Noah (Guzman) who offers to help around the house as he looks after his ill uncle.

Noah and Kevin start hanging out with Noah showing Kevin certain things mostly handy orientated. Noah wants to get back into school to learn about literature which just so happens to be the class that Claire teaches, this brings the two closer together. Claire is forced into going on a date for the first time in 18 years and things go terrible, leading to Claire to spend the night with Noah, where she regrets the moment she wakes up in the morning.

When Kevin returns we start to see a change in Noah as Noah starts to become obsessed with Claire. Things take a turn when Claire decides to let Garrett have another chance and try and work out their marriage. Noah starts his plan to get Claire by talking Kevin into resenting Garrett for living him for 9 months. We continue to learn about Noah’s past and we see just how disturbed he really is and how much danger Claire has put herself in.

The Boy Next Door is a film that follows the very simple guidelines for stalker obsessed films, everything comes off very standard. We have the let’s get friendly with the neighbour routine, the wildly drunken night, realization of the mistake before the friendly person turns out to be crazy. Now time for the problems, the son really isn’t going to be swayed by a conversation when he was already excited about his parents getting back together. I also feel that Noah’s character really didn’t have any idea what he wanted from Claire because he never explains about running off into the sunset or anything. I don’t expect this to go down as one of the better films of the year but I do feel like that casual fan will get enough entertainment out of it all. (5/10)

Jennifer Lopez: Claire Peterson separated wife, mother and teacher who spends the night with her new neighbour, but when she wants to give her husband another chance leading to her having to fight for her career and life from this obsessed boy. I was going to give Jennifer a good mark but the final act was just terrible from her she looked completely out of place. (3/10)

Ryan Guzman: Noah Sandborn the new neighbour who helps around the house before having a night with Claire. He turns obsessive when he gets told it was a mistake and Claire decides to give her husband another chance. Ryan does a solid job with his character and manages to play both sides nicely. (6/10)

Ian Nelson: Kevin Peterson son of Claire who becomes friends with Noah who then starts to get played by Noah into pushing the family apart. Ian does a solid job but does come off very annoying. (5/10)

John Corbett: Garrett Peterson the husband who is trying to make up for his mistakes and rebuild his family with Claire and Kevin. John does a solid job in the supporting role but never does have enough time on camera. (5/10)

Kristin Chenoweth: Vicky Lansing the vice principal and good friend of Claire’s who is trying to push her into dating but soon has to help her cover up for the mistake that Claire makes. Kristin gives a solid supporting performance. (6/10)

Support Cast: The Boy Next Door doesn’t have the biggest supporting cast with not many characters turn up in many other scenes.

Director Review: Rob Cohen – Rob does a solid job but the final act feels rushed and out of place for the whole film. (5/10)

Thriller: The Boy Next Door does give you the feeling of what will happen next but never pulls you fully in. (5/10)

Settings: The Boy Next Door uses very basic settings, the home, the school and well that seems to be it we have a few scenes here and there but they all work to make the film have the right location feel to it. (7/10)

Suggestion: The Boy Next Door is one to try, it does enough for the casual fan but it doesn’t stand up next to other thrillers. (Try It)

Worst Part: Final act is rushed and escalates the story too fast.

What Could Have Been Better? – Better pacing.

Tagline: A moment she couldn’t resist, an obsession he can’t control.

Overall: The Boy Next Door really is a bog standard thriller that will easily be forgotten.