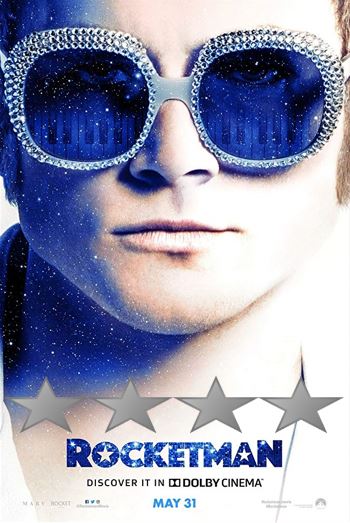 Tagline – The Only Way to Tell His Story is to live His Fantasy.

Story: Rocketman starts as we see how Elton John (Egerton) is checking himself into rehab after his years of abuse of alcohol, drugs and sex, in rehab Elton tells his story from when he was shy timid Reggie who was raised by his mother Sheila (Howard) and father who never encourage his talent to be able to pick up any musical sound he hears.

Reggie continues to follow his dreams, changing his name to Elton John where he is team with songwriter Bernie Taupin (Bell) which would see them rise to international fame, where Elton would turn to drink and drugs to cope with hiding his own sexuality from the world, which could see him lose his international fame.

Characters – Elton John is one of the most famous singers in the world, in this film we see how his timid upbringing would see him turn to music where his abilities have gone to show he can pick up any music and mimic it, as well as create his own sound. We see how he tries to make an impact, working with Bernie Taupin to turn his words into song that will define a generation. Elton has an ability to see how each song can be seen which shows how his drug filled fantasies made the performances easier for him to perform. Bernie Taupin is the best friend to Elton, he writes the songs which will see the stardom come to the pair, he performs to be away from the spotlight, which will see him being the only one that can find Elton a grounded base with his stardom. John Reid is one of the managers that was also a lover of Elton’s, he is controlling with how he makes Elton perform even when he isn’t in the mindset, John is the type of person that we see ruin careers of the best performers from around the war. Sheila is the mother of Elton, she doesn’t show the encouragement you would expect a mother to show towards their child with talents that Elton possess.

Performances – Taron Egerton is fantastic in this leading role, you completely believe he is Elton John with each and every moment in the film, the serious sides to the performances. Jamie Bell is great too, bringing the calm side to the story which is important throughout. Richard Madden is truly wonderful because he brings this horrible person to life. Bryce Dallas Howard completes the great performance throughout the film which sees her show somebody that doesn’t support their child.

Story – The story here follows the early years of Elton John to the time he finally is able to get over his addictions that could see his career being over before he has given us the legacy we know he has had. The story is told in the fantasy visions through each song, which is wonderful and the highlight of the story telling process, the career that Elton had was great to see unfold too. The biggest weakness in the story comes from the lack of timeline unless you know Elton’s song history, we do struggle to know just where things are set until you do the maths at the end of the film. the story to watch is pure fun to watch and enjoy.

Biopic/Music – The biopic side of the film shows how Elton John did go from timid shy young boy to one of the most flamboyant performers in music history, we see his demons start to takeover showing his abilities are slowly heading in the wrong direction. The music side of film shows how the visions of the music come to life with each song having its own unique look.

Settings – The film shows the different location that would see Elton go from small neighbourhood house, to the mansion he spends his time alone in, as well as the different levels of performances from bars to stadiums. 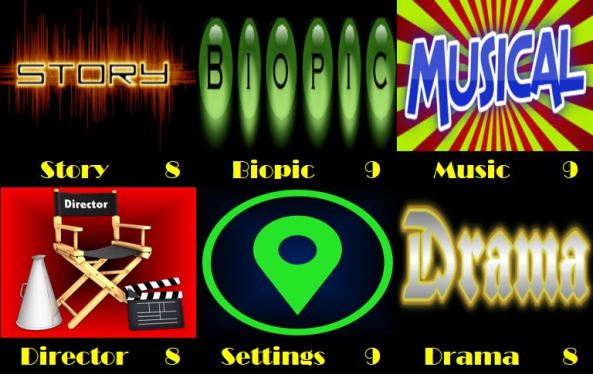 Scene of the Movie – Your Song.

That Moment That Annoyed Me – No timeline.

Final Thoughts – This is one of the mot flamboyant biopics you will ever see, it turns the songs of Elton into song and dance moments which will only entertain throughout.

Plot: Rich Mr. Dashwood dies, leaving his second wife and her three daughters poor by the rules of inheritance. The two eldest daughters are the titular opposites.

Story: Sense and Sensibility starts when Mr Dashwood (Wilkinson) dies leaving his inheritance to his son John (Fleet) by law, his wife Fanny (Walter) wants his second wife Mrs Dashwood (Jones) and the daughters Elinor (Thompson), Marianna (Winslet) and Margaret (Francois) to move out as soon as possible living off just the £500 a year.

As the family moves to a small cottage Elinor must leave the early feelings she has for Fanny’s brother Edward Ferrars (Grant). While in the cottage Elinor watches as Marianne gets courted by a couple of men Colonel Brandon (Rickman) and John Willoughby (Wise) who both could bring the family back to the high life.

Thoughts on Sense and Sensibility

Characters/Performance – Elinor Dashwood is the eldest sister of the family she falls for Edward but knows she can’t be with him because of her new social status, she also looks after the younger sisters. Marianne is the middle sister and the one easily led astray by her heart never being able to hide her feelings when it comes to love. Edward Ferrars is the kind quiet brother of Fanny who wants nothing more than a life away from the high society. Colonel Brandon is a middle-aged bachelor that has lived with a broken heart but does take a shine to Marianne, he does what he can to support her through her own heart break even if he has his own desire to marry her.

Performance wise, Emma Thompson is brilliant in the leading role as well as her work on the screenplay which won her an Oscar. Kate Winslet burst onto the scene with this role which has firmly put her into the minds of any film fan now. Hugh Grant is great through his supporting role and Alan Rickman shows he had the class to perform in any film role. We do have a good supporting cast of well-known British actors too that all perform well.

Story – This is a Jane Austin novel, so let’s face it, I will never have read the novel in the first place, I am not the biggest fan of this era movies because I find the high society annoying to see how people used to act for money rather than love. Saying this I did enjoy watching the story unfold I found it showed just how frustrating the era in British history was and is one that can be respected by all film fans. We do have love, heartbreak and money but it also spends plenty of time watching over how things could be considered farfetched.

Romance – We get to see the swings and roundabouts of love through the romance side of the story here but mostly focusing on potential heartbreak and lost love.

Settings – Each setting brings us into the time era perfectly making everything come off flawless throughout.

Final Thoughts – This isn’t a film I would be re-visiting but it is one I can say is wonderfully made, written and performed throughout.