Plot: A brood of fire-breathing dragons emerges from the earth and begins setting everything ablaze, establishing dominance over the planet.

Story: Reign of Fire starts when dragons come back from beyond the grave taking over the Earth once more and in the year 2020 Quinn (Bale) keeps a small group of survivor’s safe underground from the dragons with his trusted best friend Creedy (Butler).

When the times are getting tough a squad of American soldiers led by Denton Van Zan (McConaughey) who have been hunting dragons arrive on the scene and with the new information and weaponry we could see the end of the dragon problem the world is facing.

Reign of Fire takes us into a battle between humans and dragons and the dragons are winning this one at the moment. This is what the story is really about how the humans will need to fight back to win this one and continue in this world. We have seen this used in the alien genre and this one brings fresh breath to the idea that it is the dragons a creature of mystery that could be the threat. Everything is easy to watch without really challenging us.

Christian Bale: Quinn was the first person to see a dragon as a young boy and after luckily escaping he now leads a group of survivors who are just looking to survive the dragon controlled world. He thinks he always knows best and doesn’t want to risk anything in making the dragon numbers decrease. Christian is good in this role where he gets to see him as the hero of the piece.

Matthew McConaughey: Denton Van Zan is an American soldier who has been hunting dragons with his squad but knows the numbers are getting smaller on the human side, he wants to end the dragons once and for all and pushes Quinn into helping. Matthew plays a character fully out of character for himself where he does a good job in this role.

Izabella Scorupco: Alex is the pilot on Denton’s team she has learnt that there could only be one male dragon and killing this dragon could mean winning the war. Izabelle is solid in this role but doesn’t have that one scene for impact.

Gerard Butler: Creedy is the loyal friend to Quinn who has helped keep the community safe when Quinn let things get out of hand. He keeps the kids safe but isn’t the strongest in combat. Gerard is solid in this supporting role where he could easily be the lead if this was made now.

Support Cast: Reign of Fire has a supporting cast that doesn’t really offer too much to the main story with most just being introduced to die or give a few words of encouragement to Quinn.

Director Review: Rob Bowman – Rob gives us what I would like to consider a bit of a forgotten gem in the sci-fi fantasy genre.

Action: Reign of Fire has breath-taking action sequence when it comes to fighting the dragons.

Fantasy: Reign of Fire puts us square in the middle of a world where dragons are real and have taken over the world, bringing a fantasy character back from the land of myths.

Sci-Fi: Reign of Fire shows a world destroyed by an enemy the humans couldn’t fight without having to deal with destruction.

Suggestion: Reign of Fire is one for all the sci-fi fantasy fans to go back and visit. (Watch)

Tagline: They’re extremely intelligent. Highly evolved. And they don’t like sharing the planet. 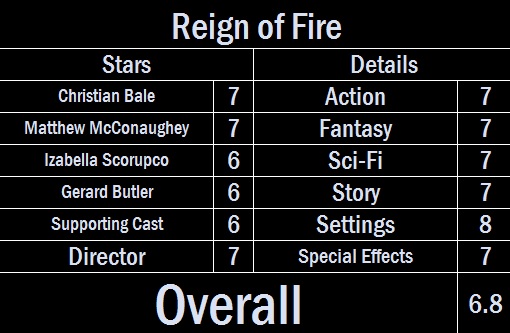