Plot: A young doctor causes a traffic accident in a small town and is sentenced to work for some days at the town hospital.

Tagline – This summer’s prescription for comedy

Story: Doc Hollywood starts as we meet hotshot doctor Ben Stone (Fox) who is on his way to a cosmetic surgery job in Beverly Hills only for him to have an accident and upsetting the locals. Ben is forced into working for 32-hours in the local doctors to pay for his crime, the Mayor (Stiers) is trying to talk into staying in the town as the new doctor and Ben must learn to navigate the town for the week.

In the town Ben starts to fall for the feisty ambulance driver Lou (Warner) who just might give him a reason to stay away from the big city life.

Characters – Ben Stone has worked for years to get to the very top of his field, he is finally getting a chance to make serious money in the world of cosmetic surgery, this has made him cocky and selfish in nature. After his accident he does try to talk himself out of any trouble only to end up needing to be a small towns doctor for the week, he finds himself torn between the high life or the quiet life after falling for a woman in the town. Lou is the ambulance driver in the town, Ben falls for her, she has her own ambitions and has made her sacrifices along the way after a previous heartache.  Dr Hogue is the current doctor in the town, he is old school style and his ways clash with Ben, he doesn’t like the new way of doctoring, but his health isn’t what it used to be. Hank is the love rival of Ben, he has been good friends with Lou for years and his fast-taking style tries to sell everyone insurance.

Performances – Michael J Fox is fantastic in the leading role here, he gets to show his natural charisma to show us how unlikeable a cocky and likeable a character can be. Julie Warner is great as the love interest that could have too much baggage for a man like Ben, we see how she makes us want and understand her characters decisions. We get a good supporting cast who all give performances that fit the characters they are playing.

Story – The story here shows us how a successful doctor on route to a big job which would leave him in the life of luxury, but along the way he ends up stuck in a small town getting back to the roots of what it is to be a doctor of a small community. This is a story that while is generic is easily on that can be enjoyed, we see how one man who has only ever thought about himself starts helping people in need of help and learning this is what will make him feel happy in life. We do get the town dynamics which we would expect to see and of course we need the love story as the woman Ben meets could help him see life a new way. This is one story that has a sweetness to everything going on and is easily one we could see everyone enjoy.

Comedy/Romance – The film does have a wonderful amount of comedy that often comes Ben’s reaction to anything he isn’t used too. The romance side of the film shows us just how meeting someone can change your view on life.

Settings – The film shows us how a high rolling doctor must adapt to quiet town after committing a minor crime, this shows us just how different the two worlds Ben must be involved.

Scene of the Movie – Leaving town.

That Moment That Annoyed Me – Certain supporting characters would be classed as generic small town figures.

Final Thoughts – This is an enjoyable comedy that showed us just how talented Michael J Fox was, it might well be generic formula and this only makes this more enjoyable movie. 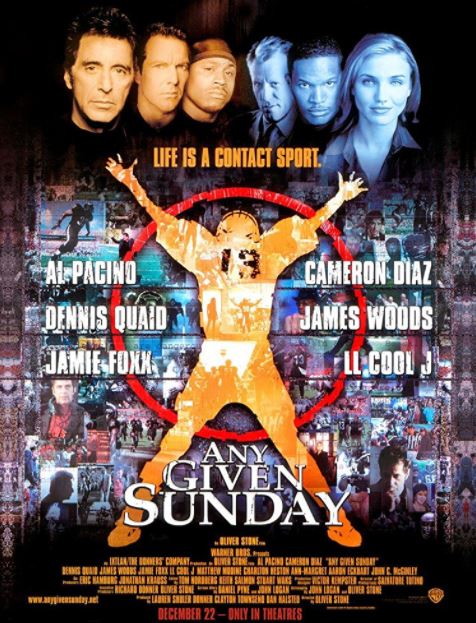 Plot: A behind-the-scenes look at the life-and-death struggles of modern-day gladiators and those who lead them.

Tagline – that women would eat her own children

Story: Any Given Sunday starts as we follow a Miami franchise American Football team going through a losing streak, coach Tony D’Amato (Pacino) is now considered old school and after losing his star quarterback Jack ‘Cap’ Rooney (Quaid) to injury he is facing the pressure coming from the owner Christina Pagniacci (Diaz).

Turning to his third-choice quarterback Willie Beamen (Foxx) who struggles at first but soon becomes an overnight sensation as he changes his mind set when it comes to the fame. With the team’s form turned around, Tony is left with the difficult decision as the play-offs approach on whether to have his leader Rooney or the loose cannon Willie, along with the rest of the difficult decisions that goes around being a coach.

Thoughts on Any Given Sunday

Characters – Tony D’Amato is the coach of the Miami Sharks, he has been for years and has won plenty of trophies, now he is being tested and questioned about his ability as the game continues to evolve. He is given difficult decisions like any coach to make it through the season, the one which could be his last. Christina Pagniacci is the owner of the club, she has gained power after her father’s death and is determined to make her team great again, she is ruthless in business and challenges Tony unlike her father did. Jack Rooney is the legendary quarterback of the team, he does get injured which leaves him questioning his own decision to stay in the game. Dr Mandrake has been keeping injuries quiet from Tony putting the players heath and even lives at risk. Willie becomes the overnight sensation as the replacement quarterback, he starts as the hard working nervous player but thrown into the limelight he thinks he is the real deal turning his back on his loved ones not being able to handle the fame. Julian is a known mercenary player, he will work for the money but not harder than he needs to. We have such a big cast, we can’t go into all of them though, the characters all fit into the American Football world.

Performances – Al Pacino was already an Oscar winner here so we know he is one of the best in the business, here he shows us why as he is brilliant in the desperate aging coach role. Cameron Diaz shows us all that she is a talent actress in this role where she gives us a dominate performance as the owner. Dennis Quaid is good in his role as the aging star. James Woods plays the role you could imagine him playing in this film style. Foxx makes for a great egotistical player that struggles to handle the fame. The whole cast looks like the person they are aiming to play in the film. 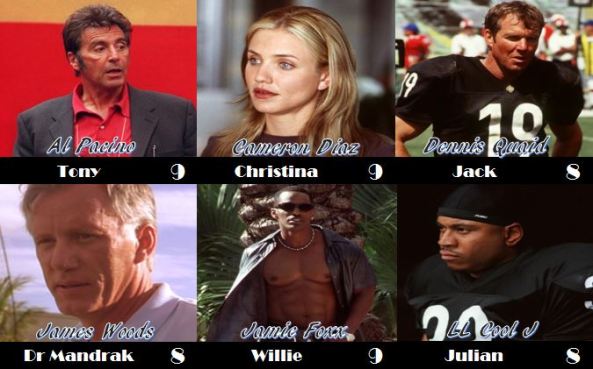 Story – The story follows a fictional American Football team as they are aiming for the play-offs to regain the status as one of the elite teams in the league. We have the small details about what has been going on in the club, the coach questioning where he stands in the game, the new owner desperate to become a powerhouse in the game, the cocky player the aging veteran and even the medical question marks about what has been putting players lives in danger. This is a unique way of telling the story, it is one man changing the team, but instead we see how the team must come together to become legends in their own right.

Sports – The American Football sequences are the heart and soul of the action in the film, they are as brutal as the game is led to believe to be.

Settings – The film takes us around the high life of the American Football scene, seeing how they go from quiet moments and the wild parties.

Scene of the Movie – Pre-Game Speech.

That Moment That Annoyed Me – Too many cuts.

Final Thoughts – If you want to see how American Football world operates, this could easily be one of the most important version of the world.

Plot: An attorney, intent on climbing the career ladder toward success, finds an unlikely opponent in a manipulative criminal he is trying to prosecute.

Story: Fracture starts when Ted Crawford (Hopkins) finally challenges his cheating wife Jennifer (Davidtz) about her affair before shooting her, Ted is a genius so he has been planning this for a while now and has come up with the perfect cover as the man who she was having the affair with is a negotiator for the LA police department Rob Nunally (Burke).

We got onto meet Willy Beachum (Gosling) who is a high rising lawyer working in the District Attorney Office under Joe Lobruto (Strathairn) who doesn’t think Willy should take his new job offer.

When one of his final cases see, Willy having to go against Ted the two find themselves having to go face to face in the courtroom as Ted decides to represent himself. What looks like an easy case soon becomes Willy’s biggest test of his career against one of the smartest men on the planet but who will come out on top?

Fracture is a crime mystery thriller turned cat and mouse style courtroom drama which follows the genius trying to show off against a young hot shot lawyer, sure we have seen this before but the fact we 100% know how guilty Ted is really tips the scales here. The case does take a few twists and turns along the way but it is the lengths that Willy will go to win this case against his own career.

The cast shine with Hopkins versus Gosling is delightful to watch whenever they go against each other on the screen. The supporting cast really don’t get the chance to shine like the lead two which does disappoint in places.

Overall: Courtroom thriller that does it’s best to keep us guessing without that final punch needed.