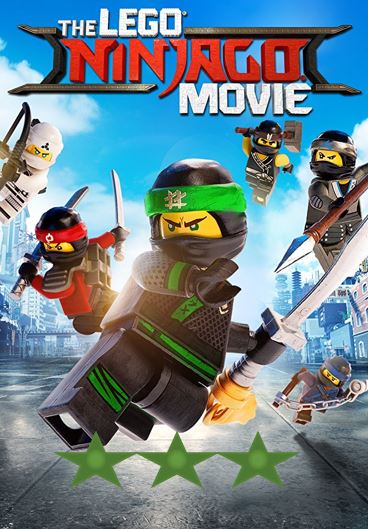 Plot: Shunned by everyone for being the son of an evil warlord, a teenager seeks to defeat him with the help of his fellow ninjas.

Verdict: Good for the Kids

Story: The Lego Ninjago Movie starts in the city of Ninjago, where evil genius Garmadon is always putting the city through terror as he is looking to rule the city with his attacks, stopping him are a group of mysterious ninja, whose identity is revealed early on to be Lloyd, the son of Garmadon and his school friends, looking to keep the peace in the city.

With the guidance of Master Yu, Lloyd must learn his place in the world after Garmadon’s latest attack leaves the city in ruin because Lloyd was planning to make a move against his own father Garmadon, now Lloyd must make up for his own mistake and save the city.

Thoughts on The Lego Ninjago Movie

Characters – Master Yu is the leader of the ninjas trying to protect the city, he has trained them for years because of his own connection to the evil Garmadon. Lloyd is the teenager trying to fit in the world, he wants to get to know his father Garmadon whose action cause him to get hated in the land, he is fighting back with his close friends trying to teach him how he needs his father. Garmadon is the evil villain that wants control of the city, he always thinks of new ideas and always seems to fail, he is Lloyd’s father though he has never been around for him. Lloyd has a group of friends which are fellow ninjas that help defend the city.

Story – The story here takes us to a new Lego world, one with ninjas, as we follow a son seeking acceptance from his father who is trying to conquer the city his son lives in. this does have a message about a father son relationship, getting over the regrets of the past and learn about people’s flaws. This does feel like a safe with a villain trying to conquer a city and the reluctant heroes trying to stop him. It does have glimpses of Megamind and just lacks the magic of the original Lego movie.

Action/Adventure/Comedy/Family – The action is large scale battles between the Lego figure which is simple and works for each location our characters find themselves on this adventure to save their world. the comedy is basic at best which disappoints through the film and it wouldn’t be appealing to the whole family, with the younger audience getting much more than the older out of this.

Settings – The film puts us in another Lego setting with the outskirts being any location we have seen in most Asian cinema of forests of the unknown perils.

Animation – The animation is good for the most part, though it does struggle the mix the animation between the real life cat involved in the film.

Scene of the Movie – The true purpose of life discovery.

That Moment That Annoyed Me – The cat reminds me too much of the South Park guinea pig episode.

Final Thoughts – This is one that the kids could enjoy easily even though it doesn’t come close to the levels of the Lego Movie.

Overall: Kids will be entertained.