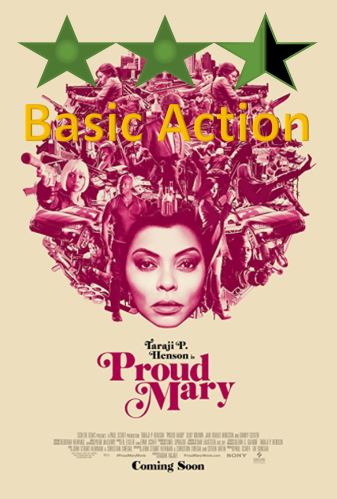 Plot: Mary (Taraji P. Henson) is a hit woman working for an organized crime family in Boston, whose life is completely turned around when she meets a young boy whose path she crosses when a professional hit goes bad.

Story: Proud Mary starts when Mary (Henson) performs a hit, leaving the son of the victim alive, one year later, Danny (Winston) the same boy has fallen into the life of crime, with Mary watching over him until she needs to rescue him.

When Mary takes out the man behind the abusing Danny, she starts a war between her own gang led by Benny (Glover) and Luka’s (Serbedzija) one she must hide the truth from before needing to fight back against the people she once trusted.

Characters – Mary is a hitwoman, she lives the high life between jobs, but she won’t take out kids, this has led to her needing to watch over one kid she refused to kill, she sees the same in Danny as she had, being left to fend for themselves. She wants to give Danny the life he deserves after knowing what could happen to him in the life of crime. Tom is the former boyfriend of Mary’s co-worker and raised with Mary, he is loyal to his father Benny, while trying to keep the business together, we don’t get much else out of this character. Danny is the loose end for one of Mary’s hits, he is left to fall into the life of crime before Mary takes him in to show him a normal life, one he should have been having.

Performances – Taraji P Henson looks the part here, she brings us the beauty assassin character well, but she is clearly too emotional at times for a cold-hearted killer. Billy Brown is the typical family matters in the killer’s circle, he doesn’t bring anything fresh to the performance. Jahi is good in the kid role, he does everything needed without looking out of place.

Story – The story here is a hitwoman that wants out of the life of crime after facing the reality of what she has been doing to children caught in the crossfire and of course she isn’t allowed to leave that easily. This is everything we have become used in a story, we have seen these movies escalate in quality in recent years, see John Wick for this, but this one is one that just never gets going enough to make us care about the decision. If you do want to see the basic story this will check the boxes without being the stand out on of any years.

Action/Crime – The trailers makes this feel like a full blown action movie, well this is wrong, we get moments of action sure, they are fun just not often enough for a movie that feels like it should be way over the top. We deal with the crime world throughout the film as we see how the people operate in this world.

Settings – New York City, the setting of choice, it is one I always say looks amazing for a backdrop, this shows how the criminals will be fighting for control of it too.

Scene of the Movie – Even though I hated the music, mostly because it is in an advert in England, the shoot-out is fun.

That Moment That Annoyed Me – Shopping, in an action movie, no thank you.

Final Thoughts – This is a standard action movie that doesn’t offer anything new to the genre, it has basic moments of action even if Taraji P Henson does bring us the highlight of the film. 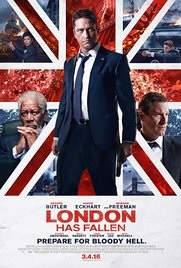 Plot: In London for the Prime Minister’s funeral, Mike Banning discovers a plot to assassinate all the attending world leaders.

Story: London Has Fallen starts in Pakistan as we learn that the terrorist movement has grown and the terrorists are planning their next move before being taken out. Move back to meet President Asher (Eckhart) and his chief bodyguard Mike Banning (Butler) as best friends.

When the British Prime Minster dies of natural courses all of the world leaders are heading to London for the funeral including Asher, Mike has to work on the security detail for his best friend.

With the begins of the funeral starting to take place all the world’s leaders have been targeted by a group of terrorists leaving many of them dead. Aamir Barkawi (Aboutboul) is the man behind the attack and al he wants is the President leaving VP Trumbull (Freeman) running the cabinet while Mike has to keep the President alive.

London Has Fallen is a sequel that really has nothing to do with the original other than bring back the characters from the original. The only thing that seems familiar is that we have a foreign terrorist. While watching all I could feel was this is how a 24 movie would go with the one man that will do anything to save president doing that to save him. I do feel it is an easy watch for all the fans out there who want an action film. In the end this is pretty much a standard action film with nothing overly special going on.

Gerard Butler: Mike Banning is the most trust bodyguard and head of security for the President, he has to travel to London for a state funeral only to discover that he is going to have to race to save the president one more time. Gerard is solid as the action hero but isn’t as strong as he should be.

Aaron Eckhart: Benjamin Asher is the President of the United States of America he has to travel to England for the funeral of the Prime Minster which turns into a trap as he must follow Banning to safety against a man who wants him dead. Aaron is basic in this role which I would have liked to see a lot more from him instead of being the almost damsel in distress. 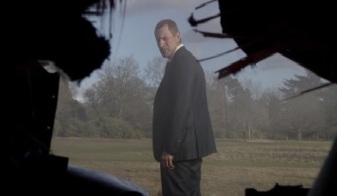 Morgan Freeman: VP Trumbull is left back home in America and when the attack happens he must work with the rest of the office to make the difficult decisions, to help the President or save the people. Morgan is basic supporting performance without doing too much.

Alon Aboutboul: Aamir Barkawi is the man behind the attacks, he has faked his death and now he uses this as his chance to get revenge on the Western world. Alon is a very generic villain without having to get his hands physical dirty.

Action: London Has Fallen has plenty of mindless action sequences without being too much memorable.

Crime: London Has Fallen puts us into a terrorist world where the criminals are trying to take out the world leaders.

Thriller: London Has Fallen doesn’t really put you on edge because we know the two leads will not suffer any peril.

Suggestion: London Has Fallen is one for you to switch off your brain and enjoy. (Brain Off Watching)

Chances of Sequel: Hopefully not.

Overall: Sequel that loses the X-factor but is a simple action movie. 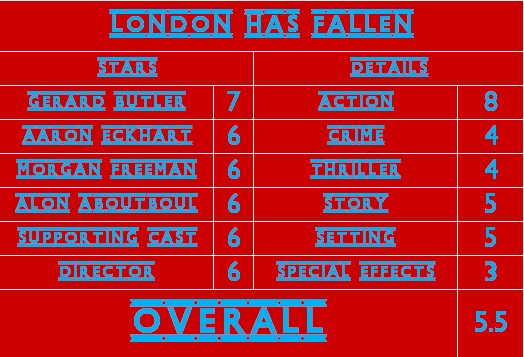