Plot: While attending a dinner party at his former home, a man thinks his ex-wife and her new husband have sinister intentions for their guests.

Story: The Invitation starts as Will (Marshall-Green) and his new girlfriend Kira (Corinealdi) get invited to Will’s ex-wife Eden’s (Blanchard) house for a mysterious gathering where Eden introduces her new partner David (Huisman), which soon turns into an invitation to join a cult for the guests.

As the night continues on Will becomes paranoid that there is an alternate meaning for the invitation but every time he believes he is about to prove the paranoia of the night, it all gets shut down and Will must start to face that he is grieving the loss of his son, or is he?

Thoughts on The Invitation

Characters – Will is the grieving former husband of Eden that attends a party hosted by his ex-wife which brings back the memories of his son, but he starts becoming paranoid about the reason for the party, he is the only one that thinks something strange is happening. Kira is Will’s new girlfriend that gets to meet his old friends at this party, she tries to be social even when his paranoia doesn’t help her get the welcome she desires. Eden is the host of the part, the ex-wife of Will’s that seems to have turned over a new leaf by joining the cult that she starts to recruit for with her new partner David.

Performance – Logan Marshall-Green does a good job here because one moment in the film he is calm, then paranoid, then emotional and back to normal, this performance shows us a full range he must go through. Emayatzy is also good as the unknown element at the party. With Tammy Blanchard being the unhinged but at times calm host of the party.

Story – The story circles around a party being held for old friends as the host has reinvented herself after the loss of her son, everything seems strange through the night until we learn about the cult she has become part of and wants the friends to become part of it but one man gets paranoid about what is happening during the night. It is easy to follow and you do spend most of the film waiting to see where it all ends up going which is rewarding by the end.

Horror/Mystery – The horror of this film comes from the idea that the characters are being recruited for a cult, while the mystery side of everything leaves us to figure out just what has been happening.

Settings – The film takes place in one house that shows how a dinner party can turn sour as everything it not quite right. 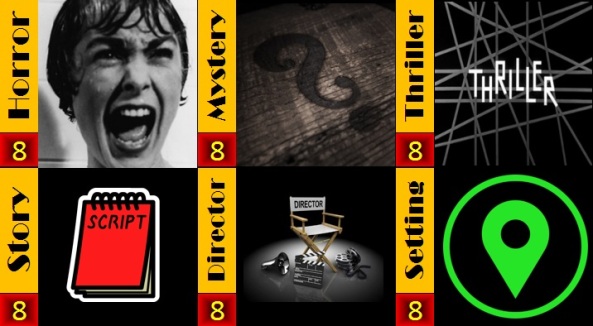 Scene of the Movie – Not the drinks.

That Moment That Annoyed Me – It is a slow build up that does seem to give too many supporting characters screen time they don’t need.

Final Thoughts – This is a good horror film, it does take time to build to the final act which is built through the tension that goes through the whole film.

Overall: Good horror that you get rewarded with by the end.