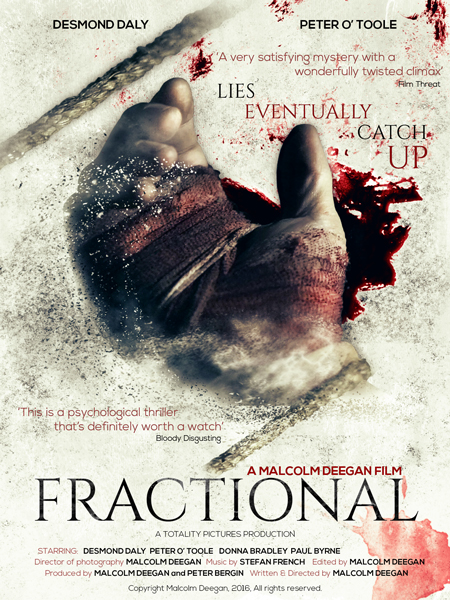 A psychiatrist, John Hatchett, wakes up tied to a chair in an abandoned warehouse. Left with no food, water or chance of escape, John’s only weapons are his mind and he must use them to full effect to outwit David Crowe, a man who is not of sound mind and claims to be a former patient. John has a past that he wishes to remain a secret… A secret David Crowe is willing to do anything to reveal…

‘Fractional is a Hybrid movie, part psychological thriller and part horror. Set in a murky claustrophobic setting where a dangerous game of cat and mouse takes place between a twisted villain and a psychiatrist with a hidden past. Bloody disgusting calls it ‘a psychological thriller that’s definitely worth a watch’

‘Fractional’ came to life when another Totality Pictures project called ‘Compromised’ fell through before principle photography. Wanting to create a claustrophobic story with minimal characters, Writer/Director Malcolm Deegan set about crafting a Character based script set in an unpredictable world of twists and turns which ends in a shattering climax.

‘Fractional’ has been picked up for north american distribution through Nelson Madison films in LA. Uk and Ireland distribution to follow soon.

You can watch on all these formats

UK RELEASE OF HORROR/THRILLER
SHE WHO MUST BURN

SAFECRACKER PICTURES WILL RELEASE SHE WHO MUST BURN ON 15TH AUGUST 2016 ON DIGITAL PLATFORMS
Canadian auteur director, Larry Kent, brings to the screen a harrowing and terrifying portrait of extremism in the name of religion as fanatical Christian anti-abortion activists terrorise a rural community.

In this tense and unnerving horror thriller, Angela, a former nurse at a Planned Parenthood clinic, offers help to women from her home after the local government forced the clinic to shut down. Believing that Angela is coercing women to get abortions, the Baarker family—a group of dangerous and fanatical right-wing Christians – lead by preacher Jeremiah, seek vengeance. They claim that God has ordered them to cleanse the land, and the sin that Angela represents. Along with her police officer boyfriend, Angela decides to stand her ground against the church. Jeremiah is infuriated when Angela gives his wife (Jewel Staite – Firefly, Stargate Atlantis) birth control. When he receives word that a young girl has had an abortion the Baarkers start to hunt the child down. Angela takes her in and vows to protect her. But as the tension between the two sides mounts, the Baakers’ zeal turns murderous and the rule of law decays into a brutish mob mentality, leading to a horrifying turn of events.
QUOTES FROM USA PUBLICATIONS/WEBSITES:

“It’s scary and made all the more horrifying by its connection to real-world events” Cinemaaxis
“The final thirty minutes of the film will haunt you for days” Horror News
“Very, very, very suspenseful, frighteningly relevant and filled with some of the most brutal practical effects in recent memory” CinemaSlasher
“By the last act, you are squeezed in a vice grip with no relief from the atrocities committed on screen” Digital Journal
“A relentless, savage and terrifying thriller – a genuine horror film for the ages – true horror…without question a masterpiece. Five Stars.” The Film Corner
“Mind numbingly terrifying…A film that absolutely shouldn’t be missed…one of my top choices of 2015 by a long shot” Dread Central
“The horror is all in the reality…Visually, a gorgeous film” Modern Horrors
“An extraordinary piece of film-making that digs past the headlines which make us shake our heads over coffee in the morning” All things Horror
“This movie should be seen far and wide to remind Americans that their civil liberties are under assault” The Evening Class
“The shock and the awe is ever lasting” Creeper Cast
“She who must Burn is strong meat” Variety
“It works as more than just a simple horror film, this is a piece of art” Horror Underground
“Tense, unnerving and brilliant” ReallyAwfulMovies

Directed by the pioneering Canadian auteur Larry Kent who directed classics such as The Bitter Ash (1962), High (1967) and The Hamster Cage (2005). She Who Must Burn will be released in the UK on digital platforms by Safecracker Pictures on 15th August.

Psychological Horror Thriller OBSERVANCE to be Released on DVD/Blu-ray

With the dread-infused claustrophobia of Polanski’s The Tenant, the taut voyeurism of Hitchcock’s Rear Window, and the horrific visuals founds in the works of Cronenberg, Joseph Sims-Dennett’s Observance is one seriously intense thriller. The psychological horror tale involves a private detective who, hired to watch a woman across the street, begins to experience a violent mental breakdown.

The English-language Observance will be released on DVD and Blu-ray (and exclusive streaming on Vimeo) August 2, 2016, and on most major VOD outlets beginning October 11th.

There’s no stopping The Killer Robots This July!

A film that’ll “excite, amaze and confound you” (Quiet Earth), The Killer Robots!Is the brainchild of the band of the same name, a Florida-based outfit that are as well-known for their infectious tunes as they are their unique attire (they wear robot outfits!).  The members of the band- – play the core characters with Jenna Hellmuth (Daredevil), Shawn C.Phillips (Return to Nuke ‘Em High Volume 2), YouTube sensation Brian Manowitz, rocker Mandaddy, and WWE wrestler Jesus Rodriguez in supporting roles.

Admirably, all of the costumes, giant monsters, buildings and spaceships in the film were actual miniature models built from recycled bottles, packaging, plasticware and toy-parts!

Official Synopsis: Beyond the Boundaries of imagination, there is a dimension where living machines battle for supremacy, and those who oppose find only destruction.
After meeting their end in a mechanized gladiator arena, four robotic mercenaries – Auto, Max, Strobo and Trog are extracted from a junk pile, rebuilt and recruited as mercenaries for a mysterious organization of android adventurers.
Although reluctant at first, the mercenaries agree to travel to the planet Vidya, an artificial world ravaged by a computer virus that has sent its robotic inhabitants into a state of primitive barbarism. Assaulted by all manner of killer machines and mechanical monsters, the mercenaries must make their way through a tumultuous landscape, activate a mysterious communication device, link multiple universes, and bring about a new age of enlightenment and prosperity for a dystopian galactic civilization.

Written and directed by Sam Gaffin, The Killer Robots! Crash & Burn will be available July 15 on VOD.

Available from Aug 2 on Demand, Max Perrier’s Feed the Devil stars genre favorite Jared Cohn (Pernicious, Sharknado : Heart of Sharkness) as a man who goes head-to-head with a demonic beast in the wilderness.

Given a map to marijuana planted in the remote wilderness of Alaska, Marcus and his girlfriend Stella head off on an expedition to cut down the crop and make easy money. The mission quickly turns deadly when Stella vanishes and the quest to find her uncovers a trail of victims tied to an ancient Indian myth. The search becomes a lethal game of survival when they are hunted down by the demonic beast behind the legend.