Plot: On a future earth where 98% of the surface is underwater, a Warlord who controls an army of sharks meets his match when he captures the daughter of a mysterious shark caller.

Tagline – Mankind just dropped down on the food chain.

Story: Empire of the Sharks starts as we enter the world covered in water, warlord Ian Fien (Savage) controls the communities demanding supplies and anyone that crosses his path will fall to his army of sharks he has control over.

When he takes Willow (Lange), Timor (Armstrong) her guardian sets out to rescue her with Sion (Sebe) by his side, to take on the Warlord to bring peace to the local area.

Thoughts on Empire of the Sharks

Characters – Ian Fien is the ruthless warlord that has control over the sharks which he uses to terrorise the communities in the open water. He has a plan to stay ahead of the game, but this time he might finally meet his match. Timor has sworn to protect Willow, once she is taken he will go out of his way to build a team to take down the warlord, he does show his naivety when searching for a team though, not willing to get as dirty with his ideas as needed. Willow could well have the power to control the sharks and bring peace to the waters with her ability, she just needs to learn how the master this ability, something Ian wants off her too. Mason is the member of Ian’s team that goes to the outposts to collect, he shows us just how twisted the men will be.

Performances – The performances from the whole cast are not going to be getting any awards, they are mostly poor, with Jack Armstrong struggling to make the impact needed for his character, John Savage and Jonathan Pienaar do enjoy being the villainous characters though.

Story – The story here shows us one young man that decides he has had enough of the terror filled reign of the warlord in a water world and sets out to bring him down. There is a side story about being able to control the sharks to make battles easier to achieve with whoever has power can control the oceans. This does follow the check list easily with the unlikely team working together with each of their own quirks that makes them stand out in their own way, the idea of the planet being overrun by water with warlords and workers is what we have seen before.

Action/Horror – The action we see in this movie comes from most of the CGI shark attacks, we don’t get anything that is going to be memorable for the good reason. The film doesn’t use the horror elements either because next to nothing in this film is remotely scary.

Settings – The film is set in out in the ocean as Earth is covered by water, this does help with the idea of sharks being the danger otherwise it could have just been a beach moment.

Special Effects – We have seen syfy films, we know the level of effects and don’t go in there looking for the best. 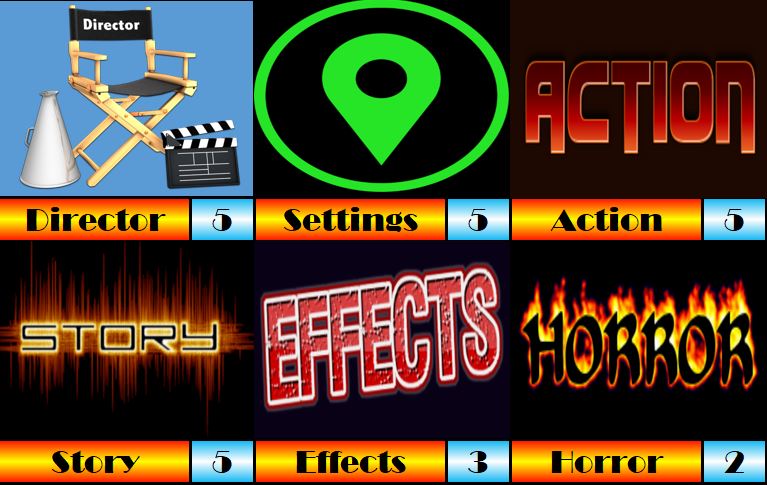 That Moment That Annoyed Me – Timor isn’t strong enough of a character.

Final Thoughts – We have seen syfy films, this fits in nicely in that collection, it isn’t great, it isn’t terrible its just fine.

Plot: A wild creature attacks six students on a weekend hike in the woods. One by one, they become infected with a “feral disease”, turning them into rabid, bloodthirsty creatures, and the vacation becomes a nightmare as they fight to survive each other.

Story: Feral starts as we meet six friends, Alice (Taylor-Compton), Jules (Luccardi), Brienne (Olstead), Jesse (Kelly), Gina (Allbright) and Matt (Finn) going on a weekend hike, which is filled with the drama of relationships, the first night takes a dramatic turn when Matt and Brienne are attacked by a creature, with Brienne left injured by the attack.

They seek shelter with Talbot (Temple) who has a cabin in the woods, but they are far from help, with the group needing to fight against the creatures that will turn them into rabid monsters.

Characters – Alice takes control of the situation, using her experience of animals to deal with attacks and try and hold the friends together, she has her own secrets from her father, which she needs to address on this weekend too. Jules is the girlfriend of Alice, she is the newest member of the group and wants Alice to speak to her father, while dealing as an outsider more. Talbot is the stranger in the woods, his cabin because the base for what happens, only he has his own reasons for being in the cabin. The rest of the cast complete the friends list which are more victims than any sort of character.

Performances – Scout Taylor-Compton is the big name from the horror community, she is the best of performers, with Lew Temple bringing the next most interesting character to life.

Story – The story here follows six friends on a hiking trip that come under attack by a feral creature, which will turn them rabid if they are bitten, with the battle to survive being the most important thing. This survival story is one we have seen before, it is one that works and is easy to understand, we know that we will always shave one that can fight back better than the rest, while the rest usually just become the victims or make mistakes. The characters involved in the story are written quite weakly with the idea of romance that needs to be addressed being about as deep as we get here. It does make it an easy watch, with a story that never gets complicated.

Action/Horror – The action in the film does rely on the fights with the creatures, which shows the intensity of the horror we are going through.

Settings – The film creates the remote locations of a hike in the woods, it does show where the creatures could be getting kept and how difficult it would be to escape from.

Special Effects – The effects in the film are used to show the damage the creatures can inflict, it does make them look more terrifying too which helps the fights seem more realistic.

Scene of the Movie – Sneaky, sneaky.

That Moment That Annoyed Me – The characters a very thin.

Final Thoughts – This is a horror that you could easily stick on one night, it is an easy watch, has the bloodbath you could enjoy and by the end it isn’t bad to watch.