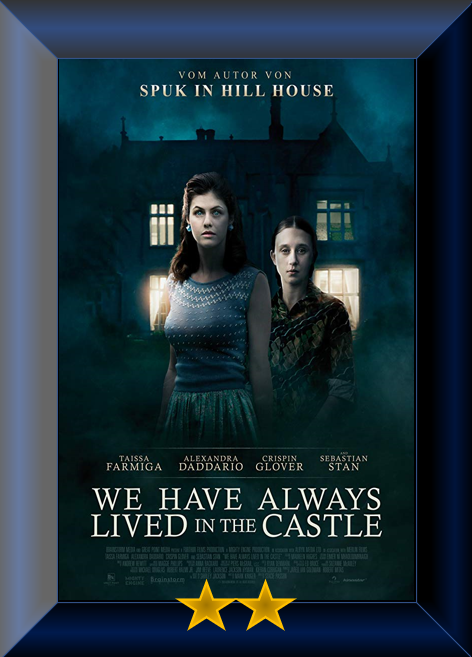 Plot: Merricat, Constance and their Uncle Julian live in isolation after experiencing a family tragedy six years earlier. When cousin Charles arrives to steal the family fortune, he also threatens a dark secret they’ve been hiding.

Story: We Have Always Lived in the Castle starts as we meet Merricat (Farmiga) and her older sister Constance (Daddario) Blackwood who continue to live in the family mansion under the care of Uncle Julian (Glover), they are not welcomed around town, with the mystery of what happened to their father still hanging over their heads.

Merricat has always been trying to keep Constance in the house, but when their cousin Charles (Stan) arrives it does make a mess of her plans and she must go to extreme lengths to keep her family together.

Thoughts on We Have Always Lived in the Castle

Characters – Merricat is the youngest member of the house, she looks after her older sister that is still scared to leave the house after the incident, she goes into town where she knows the people don’t like her and will do anything to keep the family together. Constance was once the outgoing of the sisters, she lost that when she was involved in an incident, which now keeps her housebound in fear of what people will say, this is until her cousin arrives, which sees her wanting to go out in the world again, even if she isn’t stable enough for this. Uncle Julian acts like the caretaker who has been looking to make a book of the events, always looking to create the next chapter. Charles is the cousin that arrives at the house, which sees everything start to spiral out of control with how he clashes with Merricat.

Performances – Taissa Farmiga and Alexandra Daddario are both strong in the film, they show how the characters do feel isolated in their world, with the troubles they have been through. Crispin Glover is entertaining when he is let loose, while Sebastian Stan does seem weird, but doesn’t make the bigger enough of effect.

Story – The story follows two sisters living outside of a small town, they live away from the rest of the town often seen as outsiders, with their peace being shattered by a distant relative. This story doesn’t seem to get going, which ends up just following the characters around the house, trying to rebuild their own reputations with what they once had or losing everything they once had.

Mystery – The mystery is meant to be about what is happened in the mansion before, leading to the mentality of the characters.

Settings – Most of the film is set in the mansion, which shows the life of luxury the sisters have been living in.

Scene of the Movie – The fire.

That Moment That Annoyed Me – The mystery seems flat.

Final Thoughts – This is forgettable drama mystery that just doesn’t seem to get going on the levels it could do or tries to give us to work with.