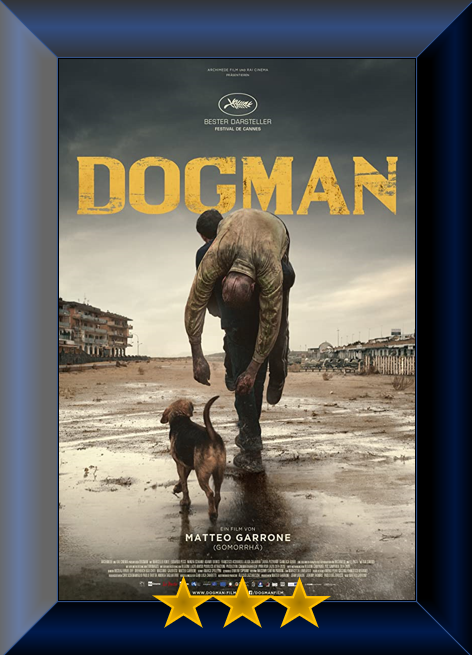 Plot: A timid dog groomer living in a poor suburb sells cocaine on the side and stays out of trouble, while trying to deal with his unstable, violent acquaintance who is a menace to the whole neighborhood.

Tagline – Everyone has a breaking point.

Story: Dogman starts as we meet the timid dog groomer Marcello (Fonte) who prides himself on his ability to keep the neighbourhood dogs in good condition, though he also moonlights as a cocaine dealer, with one of his biggest clients Simoncino (Pesce), an aggressive criminal.

When Simoncino forces Marcello into helping him commit a crime on his neighbour, he is left with no choice but to help, seeing his own life spiral out of control.

Characters – Marcello is the timid dog groomer, dog lover and will always do everything to make sure animals are safe, he is reluctantly selling drugs to the side, slowly getting himself dragged into a life of crime, which he doesn’t want to, but things just get out of control forcing him to need to finally stand up to the bully criminal. Simoncino is the druggie criminal that is always pushing Marcelle into either supplying for him or helping break the law, he uses his build to intimidate him into committing the crimes.

Performances – Marcelle Fonte in the leading role is great, we get to understand the struggles he is going through with a bully of a criminal around, which also shines through in his kindness towards the animals. Edoardo Pesce fits the bullying criminal performance well, showing how his presence would use his intimation to get what he wants.

Story – The story here follows a timid dog groomer that has found himself in the middle of a crime ring after one of his drug dealing clients starts pushing him to his limits, he is torn between what to do and will still always protect his dogs. This is a nice crime drama that shows us just how far somebody might get pushed to fit in or stay out of trouble from the person trying to control the situations. It does show how the poor neighbourhoods will be forced into doing anything to survive, which does give motivation for why Marcello does have to lives.

Crime – The crime side of the film shows how Marcello is getting pushed into things he is uncomfortable about doing.

Settings – The film is set in the one small Italian village which shows how the residents do know each other and how things around the city might not know the criminal side of the behaviour.

Scene of the Movie – The cage.

That Moment That Annoyed Me – We don’t learn enough about the supporting characters in the area.

Final Thoughts – This is a nice crime drama that shows however much you might push someone, they will be willing to fight back if you push them too hard.