Plot: Dr. Paul Kersey is an experienced trauma surgeon, a man who has spent his life saving lives. After an attack on his family, Paul embarks on his own mission for justice.

Tagline – They came for his family. Now he’s coming for them.

Story: Death Wish starts as we meet the good natured Dr Paul Kersey (Willis) who is dealing with the reality his teenage daughter Jordan (Morrone) is about to go off to college, whose family gets targeted by thieves who get caught in the act by Lucy (Shue) the wife and Jordan, both left brutally attack when the robbery goes wrong.

With his wife dead, Jordan in a coma, Paul starts to get tired of waiting for the crime to be solved, despite Detective Kevin Raines (Norris) doing everything in his power. Paul decides to prepare himself to defend himself from violence, turning into a vigilante looking to clean up the streets of Chicago. 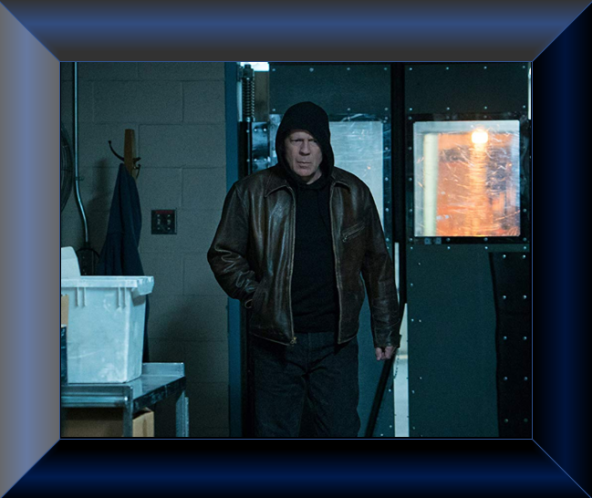 Characters – Dr Paul Kersey is a mild-mannered family man, he doesn’t get involved in confrontations, save both police and criminal injuries without questioning motives. After his wife is killed, his daughter left in a coma, he is left wondering what he has done wrong, waiting for answers, with none coming. He decides to fight back looking to fight crime building up a reputation as he searches for answers. Frank is the brother of Paul, he has always turned to Paul for help needing his support in life, with him being his rock in life. Detective Kevin Raines is leading the investigation into the murder and burglary, he is often left helpless when it comes to anything going on, not finding any evidence. Jordan is the daughter that is about to head off college, before being left in a coma.

Performances – Bruce Willis in the leading role is strong enough, he does struggle to bring to life the everyday man though, which is what is important in this character. The rest of the cast don’t really get time to do anything, as the characters are drawn out that much.

Story – The story here follows a mild-mannered doctor whose family is attack in a robbery gone wrong, who decides to become a vigilante to clean up the streets of Chicago. This is a remake of a classic, which does bring into the story a few more modern elements, with the technology being used to target people, the story going viral, it all comes into the modern world. Where the story does fall short, is by giving us weak characters, the villain is almost non-existent, with the routine following of how Paul acts towards finding his victims. We also get a clear message about how gun control is well out of control in America, making a big political statement. This is an easy to watch action story though, it just ends up not offering much new.

Action/Crime – The action is very simple shooting scenes, showing the inexperience of Paul during the shot outs. While the crime side of the film is focused on trying to lower the crime rate.

Settings – We are set in Chicago which is known for the high crime rate, which shows how helpless the police could be with certain crimes.

Scene of the Movie – Are you the ice cream man.

That Moment That Annoyed Me – The lack of the villain character.

Final Thoughts – This is a by the book action film that is entertaining enough, without being anything overly different from what we have seen before.