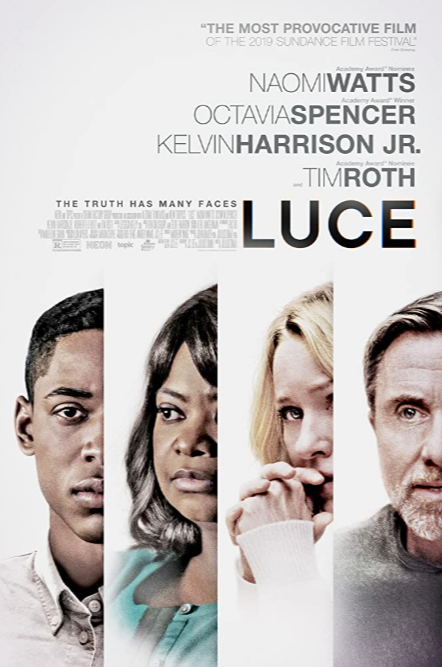 Plot: A married couple is forced to reckon with their idealized image of their son, adopted from war-torn Eritrea, after an alarming discovery by a devoted high school teacher threatens his status as an all-star student.

Tagline – The Truth Has Many Faces

Story: Luce starts as we meet all-star student Luce Edgar (Harrison Jr) on the verge of a bright future, his adopted parents Amy (Watts) and Peter (Roth) are proud of him and how much he has achieved since they adopted him from war-torn Eritrea.

After an incident at school, one of the teachers Harriet Wilson (Spencer) discovers fireworks in Luce’s locker, which leads to a loss of trust between the family, teacher and questions circling around Luce’s past.

Characters – Luce is the model student, top of the class, sports star, the popular student with a bright future, he is refugee from Eritrea who was given a home in America, where he builds this future, he is close with his teammates, which sees them sharing lookers. He starts to clash with one of his teachers, which sees him clashing with his parents, while always staying one step ahead of the adults with stories that cover up any truths. Harriet Wilson is the teacher that clashes with Luce, she believes he has a secret that could expose his true motivations in life, while she is balancing the personal problems at home, she gets to a level which seems desperate. Amy is Luce’s adopted mother, she has always looked to create the best life for him, believing he will have a future he never imagined from his previous life. Peter is the father that always wanted to be a father, he has been happy with how Luce turned out, but deep down, he has always wondered about the connection he would have had with a child of his own.

Performances – Kelvin Harrison Jr is outstanding in the leading role, showing the pure confidence his character has in his action, while using this to hold himself together. Octavia Spencer is great too, showing how committed to making a change a teacher can be. Naomi Watts and Tim Roth shine in the parental roles, always wanting to make sure they are around for their new son.

Story – The story here follows a star student that sudden starts getting targeted by one of his teachers, he is trying to stay ahead of the accusation, while preparing for his graduation speech, leaving us wondering why he is being targeted. This story is one that is covered in tension, we know something has happened for the events of the film to be unfolding the way they are, we are left to wonder just what caused these changes, made everyone react the way they are. We get the important messages being put forward too. The story will see us believing we know what is happening, only for everything to get turned on its head.

Mystery – The film creates a mystery, which is truly brilliant to watch unfold, we won’t get the answers easily and are constantly kept guessing.

Settings – The film uses the everyday locations that a student and teacher would have, where they will see how their lives can crossover and create something bigger in life.

Scene of the Movie – Get out of my house.

That Moment That Annoyed Me – Certain scenes don’t need to be here.

Final Thoughts – This is a clever smart mystery that will spend the whole time keeping us guessing as to what will happen next, leaving us shocked with the truth.