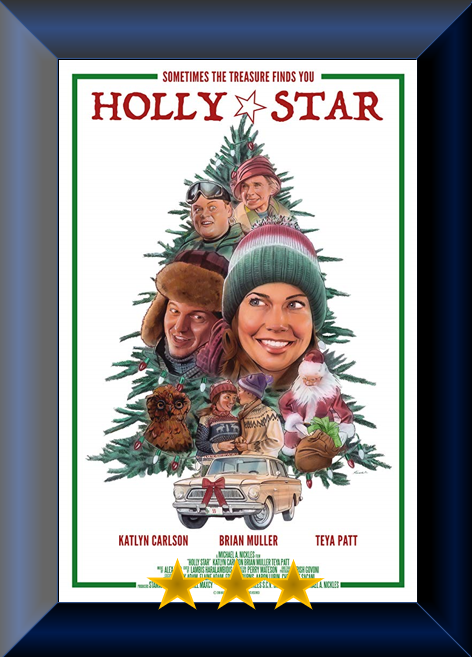 Plot: A broke puppeteer returns home for the holidays and gets caught up in a treasure hunt with her paintball-obsessed best friend, her tango-dancing grandmother, and a childhood sweetheart.

Tagline – Sometimes the Treasure Finds You

Story: Holly Star starts as puppeteer Sloan Kelly (Carlson) loses her job in the big city, right before Christmas and is forced to return home to start again. Sloan’s parents have gone away for Christmas, leaving her with just her tango-dancing Grandma (Chabora) and takes a job helping with local Christmas tree stand with old school friend Andy (Muller) and catching up with her old friend Kay K (Patt).

When Sloan gets a memory of a Santa burying what looks like a treasure, she teams up with Kay to learn about the vision, which takes her down memory lane where she learns to accept the little things in life again.

Characters – Sloan has made a career out of her puppeteer, through television adverts, only for her latest gig comes to an end, leaving her with no job and needing to leave the big city. She is returning home for Christmas, facing the reality her dreams have come to an end and she needs to look at her future once again. She spends time with her best friend and goes on a treasure hunt, while finding herself over Christmas. Andy is the Christmas Tree salesman that offers Sloan a job to help through the Christmas period as well as being an old troublemaker partner of Sloan’s as kids. Kay K is the best friend of Sloan’s, she is obsessed with paintballing and is a master of stealth always looking to surprise Sloan. Grandma Kelly is the only family Sloan has left, she is in a home and always around to give her advice in life.

Performances – Katlyn Carlson is the lead and is the best part of the film, as her character needs to go on the self-discovery, while Teya Patt gets most of the laughs through the film, Pamela Chabora is fun to watch too through the film.

Story – The story here follows a woman who loses her dream just before Christmas and is looking for any sort of sign to help put her life back together, which a near death experience gives her. This story does give us the focus on how difficult life can be when you lose everything you worked for, it shows how putting things together will help you become happier, you just got to read the signs around you and trust the people in your life to bring your smile back. We do use the Christmas miracle idea to help with this, with Sloan getting miserable over the holidays until she finds it just intime to enjoy Christmas.

Comedy – The comedy in this film comes more from the supporting cast with Kay K getting most of the laughs with her extreme love of paintball and military when sneaking up on Sloan.

Settings – The film does use the small town setting to help highlight how the past will always be there for you, people will remember the little things you do for people in life too.

Scene of the Movie – 55 Star location.

That Moment That Annoyed Me – Andy isn’t given much of a character.

Final Thoughts – This is a by the book Christmas film that is an easy watch and could be enjoyed by all, one you can sit back relax and feel the holiday with.