Based on the bestselling book by Naoki Higashida, THE REASON I JUMP is an immersive cinematic exploration of neurodiversity through the experiences of nonspeaking autistic people from around the world. The film blends Higashida’s revelatory descriptions of his autism, written when he was just 13, with intimate portraits of five remarkable young people. It opens a window into an intense and overwhelming, but often joyful, sensory universe.
The film distils these elements into a sensually rich tapestry that leads us to Naoki’s core message: not being able to speak does not mean there is nothing to say.

Plot: A normal father’s family life is turned upside down when his son discovers his dad has another family.

Tagline – You Can Choose Your Family

Story: Being Frank starts as Philip (Miller) wants to head to Spring Break, only his parents Frank (Gaffigan) and Laura (Gunn) forbid him, only for him being a typical teenager, he goes anyway. Philip is left shocked when he sees his father there and discovers that he has another family, Bonnie (Mathis), Kelly (Phillips) and Eddie (Banister) and decides to use that to his advantage.

Philip spends time with the second family, while Frank is trying to keep everything together in his double life, as Frank has a story, he isn’t willing to listen to about why he has the double life. 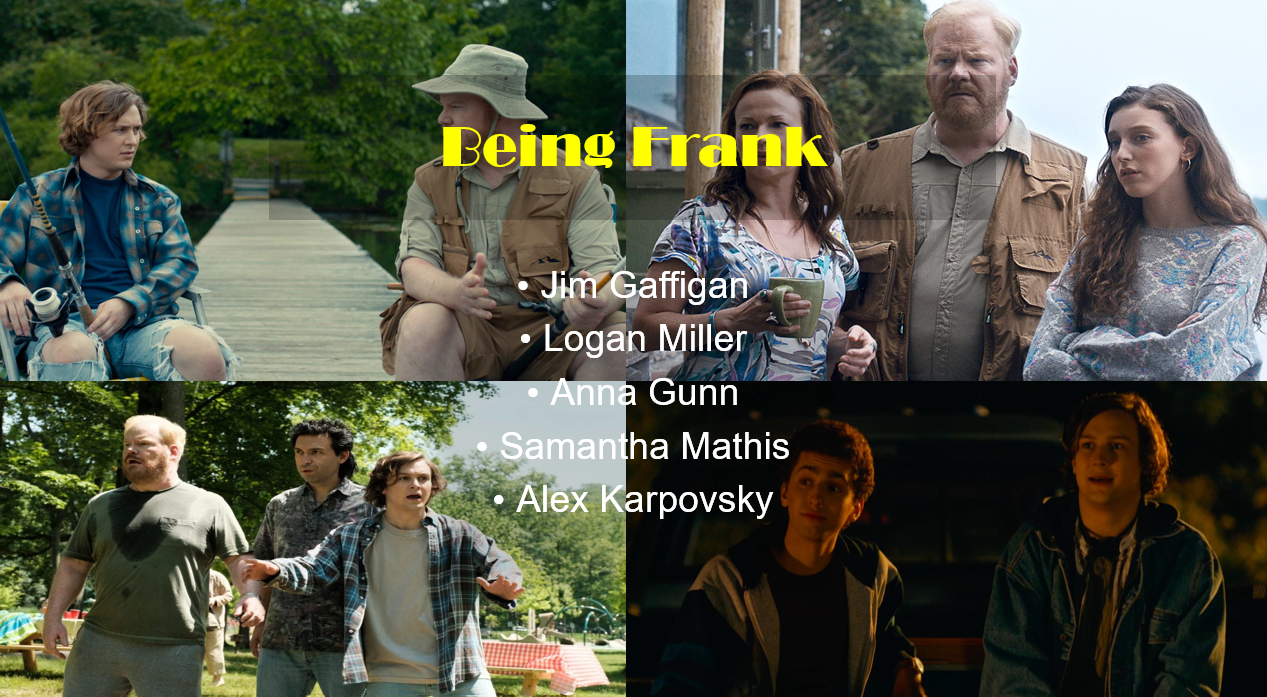 Thoughts on Being Frank

Characters – Frank is the strict father to Philip, he wants him to follow a certain path, only he does have a massive secret, he has a second family, he has been living a double life for decades now, which will see him need to think fast to keep everything together, as he has a story behind both his families. Philip is the teenage son that discovers his father’s secret, he first decides to use this to get what he wants, only he learns that he needs to build his relationship with his father in an attempt to face his own reasons for doing everything he is doing. Laura and Bonnie are the two wives, they both believe their husband is going away for work a lot and never question what he does.

Performances – Jim Gaffigan is great as the man with two families, he does show the panic in such a calm way that you can believe he is managing to hold everything together, not over selling the comedy. Logan Miller plays the role well, showing us how the truth is slowly breaking down his character. The rest of the cast give strong performances that fit the side stories of what is happening.

Story – The story here follows a son that discovers his father has two families and has done for years, they must work together to keep this secret, while dealing with the problems they have been the doing. This does start out by seeing the full betrayal idea, only as the story unfolds, we get to see just how Frank got himself in a position where he literally doesn’t know what to do with his life. It does get to deal with lies that can be used for a greater good, ones where they are being used to make life better for people.

Comedy – The comedy in the film is about how Frank is always trying to keep ahead of the game, always has a plan and his priceless reactions to everything that has been happening.

Settings – The film uses the Spring Break locations to show the two different locations Frank lives in and how things have been running so smoothly for him.

Scene of the Movie – The truth comes outs.

That Moment That Annoyed Me – Not much time is given to the wives.

Final Thoughts – This is a comedy that does get to give us strong laughs with Jim Gaffigan’s performance which is filled with priceless reactions.