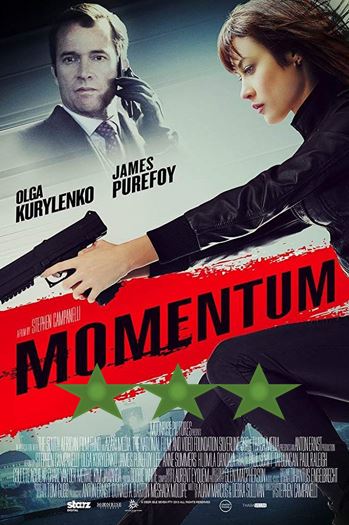 Plot: Alex, a mysterious thief, is pulled in by her former partner for one last heist. She quickly finds it was never just about the diamonds. A brutal murder sparks a cat and mouse chase between Alex and a master assassin. Now she must uncover the lies behind the heist and discover the secrets behind the men who have made her a target.

Story: Momentum starts as we see how Alexis (Kurylenko) operates her heist team and takes control when things go wrong, she finds herself needing an escape after her identity is revealed on the latest heist, this isn’t her only problem though, her team have take evidence that could bring down a Senator (Freeman) who has hired an assassin Mr Washington (Purefoy) to retrieve the video.

Alexis must stay ahead of Mr Washington who is relentlessly searching for information including going after the family of her former partner.

Characters – Alexis is a master thief, she can put a team together to get any job done with a team even after trying to get out of the life. The latest job goes wrong and Alexis must stay ahead of an assassin that wants her latest score which could bring down a Senator. We see all her skills in evading capture and taking out enemies one at a time. Mr Washington is the assassin who is guiding a team in search of a drive for the Senator, he will do whatever he can to get information and isn’t afraid to kill anyone who gets in his way. The Senator is trying to cover up his own secrets using the assassination team.

Performances – Olga Kurylenko is good in this leading role, she can handle the action well and can get the emotional moments down well enough. James Purefoy looks like he is enjoying the villainous role getting the speech moments while being the sadistic assassin. Morgan Freeman doesn’t need to do that much other than be a man on the other end of the phone. The rest of the cast don’t get too much to do either.

Story – The story follows Alexis a thief that has been trying to get out of the business, when she completes one more job, she finds herself needing play cat-n-mouse with the assassin set to clean up the senator’s mistakes. This does follow the routine that we would imagine seeing from the action thriller genre with each encounter becoming more intense for the two sides involved. The story never tests us which is fine, any twists coming we would expect to see through the film, for the action genre we get everything we need to see.

Action/Crime – The action is shooting, fighting and shows us just what Alexis is capable of when it comes to fighting to survive. The crime in the film shows how a routine robbery turns into a deadly game.

Settings – The film doesn’t get any major settings to work with, the highlight being the station scene which keeps everything on edge during the end of the film.

Scene of the Movie – The station showdown.

That Moment That Annoyed Me – Nothing is overly original.

Final Thoughts – This is a simple to watch action film, it keeps everything easy to watch for the action junkie without pulling us to the edge of our seats in the film.

Plot: After workaholic Kevin has a drunken one night stand with the beautiful train-wreck Madeline, he’s horrified to discover that she’s actually his boss’ jilted ex-mistress. When she takes a bottle of sleeping pills, Kevin is forced to keep her awake… and over the course of the night the two begin to fall for each other.

Story: Night Owls starts when Kevin (Pally) has a one-night stand with a mysterious girl (Salazar) and when planning on leaving he learns this isn’t her house and is in fact his boss’s house. Panicked he tries to figure out what to do with his best friend Peter (Huebel) advising him what to do after she tries to commit suicide.

Saving Madeline, Kevin tries to learn her story and the affair she has been having with Kevin a sports star, the two must learn about themselves to get through the night and refocus on their own lives.

Characters – Kevin works for Will, he has a one-night stand only to find out who the woman is, he tries to help her with her own problems which also helps him address his own problems, he is nice guy middle-aged and filled with regret. Madeline is the girl that brings Kevin back for the night, she has planned on killing herself because of the man she has been seeing until she gets a chance to open up with Kevin to talk through her own problems in life. We do get a couple of supporting character, but most barely in appear away from the lead two characters.

Performances – Adam Pally and Rosa Salazar are both good at carrying this movie, they are both strong as they are the ones going through the conversations in the film. the supporting appearance are good enough for what they are doing, but they don’t make an impact in the film.

Story – The story follows a woman who had planned to kill herself to get back at her lover and the man she takes home that wants to help her out of the situation. This is a conversation-based movie which is very interesting as we get to focus on the real problems people are facing in life be it careers, relationship or just being relevant in life. We see how both have problems and spending the night talking to somebody can change your look on life.

Comedy – The comedy in the film comes from little moments that happen between the two, giving us light moments to the serious conversation.

Settings – The film takes place in one house for the whole time through the night, it shows us talking it through problems can help as we never need to leave the house. 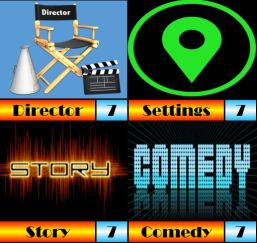 Scene of the Movie – The pool.

That Moment That Annoyed Me – They do seem to repeat the arguments at times.

Final Thoughts – This is a good conversation-based movie which is one that can teach life lesson for both sides of the conversation, strong leading performances too.