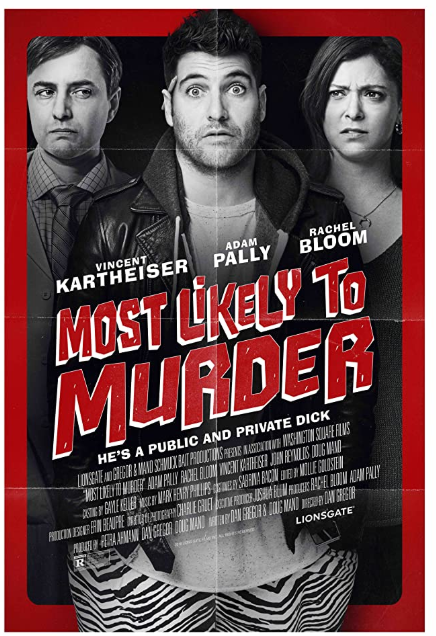 Plot: A home for the holidays murder-mystery comedy – former high-school hero Billy (Adam Pally) comes back to his hometown expecting things to be like they used to. Instead, he finds all his friends have moved on, and his ex (Rachel Bloom) is dating the former high school outcast (Vincent Kartheiser). So, Billy becomes obsessed with proving the outcast is actually the killer behind a mysterious local death. It’s like Rear Window – for stoners.

Story: Most Likely to Murder starts when Billy Green (Pally) returns home after time in Vegas where work hasn’t gone the way he had hoped, with him looking to come back to his old lifestyle in his small town, where he finds his old-flame married, his high school crush Kara (Bloom) no longer as childish as him and now dating his neighbour Lowell (Kartheiser).

When Billy is drunk, he believes he witnesses Lowell, murder his mother and decides to go in search of answers to prove the man his love is with, it a dangerous man, while the rest of the neighbourhood has great respect for Lowell. 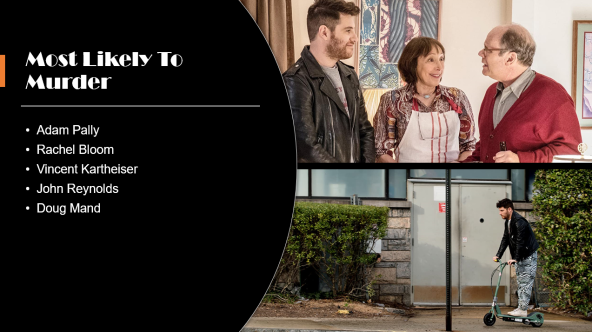 Thoughts on Most Likely to Murder

Characters – Billy is a slacker in life, he had big dreams, but he never took his life seriously and has returned to find everyone he grew up with moved on with their lives, after a night of too many drinks, he believes he has solved a murder, only for this to be the reason why more people turn on him. Kara is the old flame of Billy’s from high school, she has started dating Lowell and does see the good in his behaviour around the town. Lowell is someone that Billy used to pick on through high school, he has built himself a reputation of being a nice guy around town now though, even if he does become the target of Billy’s investigation.

Performances – Adam Pally does make his character as unlikeable as he could be, which is part of the point of his character. Rachel Bloom and Vincent Kartheiser fill the supporting role well through the film.

Story – The story here follows a slacker as he returns home, he finds everybody moving on with life, while he is trying to solve a potential murder, only to see more of the town turn on him, as he looks for the truth. This is a movie about trying to relive childhood memories and needing to learn to take life more seriously if you ever want to get the most out of it. We do get the message about not messing with other people’s lives too.

Comedy – The comedy in the film is not the strongest part, with most jokes not working to the highest level.

Settings – The film uses a small town, which is designed to help bring back memory lane.

That Moment That Annoyed Me – Billy isn’t likeable in anyway.

Final Thoughts – This is a comedy that misses on the comedy more often than it hits, with a story that is trying to play into the Rear Window and misses that idea with a twist.

Overall: Comedy without a punch. 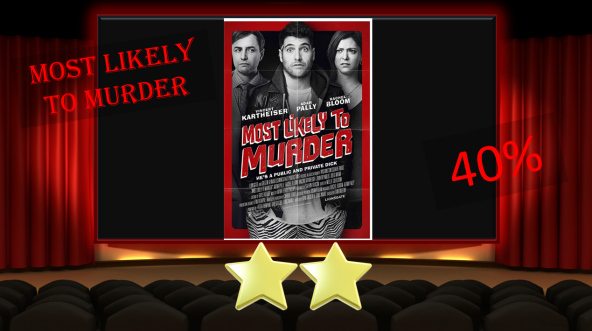 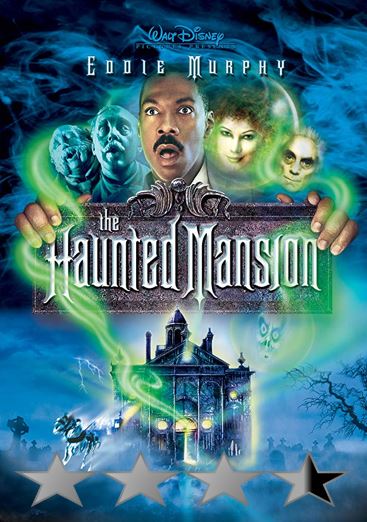 Plot: A realtor and his wife and children are summoned to a mansion, which they soon discover is haunted, and while they attempt to escape, he learns an important lesson about the family he has neglected.

Tagline – Check your pulse at the door… if you have one.

Story: The Haunted Mansion starts when a hot shot realtor Jim Evers (Murphy) and his wife Sara (Thomason) get an opportunity to sale the mysterious mansion for Master Gracey (Parker), taking their children on their family vacation for an early valuation on the mansion.

When the truth comes out about the history of the mansion Jim must battles ghosts to save his family before the curse takes its next victims.

Thoughts on The Haunted Mansion

Characters – Jim Evers is a fast-talking hot shot realtor that often puts his career before his family despite loving them, he is always out to make more money to give his kids the chances he never had. It is his decision to take the latest job even though he isn’t the partner the client needed. Sara is the partner and wife of Jim, she has a different approach in places which sees her give her children more time. She is the one required to come to the mansion for the sale of the house, even though she finds herself wanted for something else. Master Gracey is the owner of the mansion, he has lived through a long legacy and has summoned for Sara to attend the mansion for his own reasons. Ramsley is the butler that has been planning everything out, he welcomes the guests, places them where he needs them.

Performances – Eddie Murphy was on the decline at the time of release, this performance is one of his better performances because he knows how to play to his audience. Marsha Thomason is strong in the role of wife, mother and realtor, she is the calm to Eddie’s pure energy. Terence Stamp is the well-spoken butler that we know he will always be, while Nathaniel Parker does work well against a charismatic Murphy.

Story – The story follows a family of realtors that get drawn to a mansion for what they think is business only to find themselves in the middle of the haunting events that has kept the mansion away from the public’s eyes for years. This story is based on a Disney Ride, which follows in the footsteps of the Pirates of the Caribbean. The idea of what is going on within the house is an entertaining story which does have you guessing what the truth might be. The family dynamic works well because you do believe each character to have their problems which need to be addressed to bring the family closer, with this night at the mansion letting them prove themselves as a unit.

Comedy/Fantasy – The comedy in the film comes from the actions of Eddie Murphy, he does get the laughs when required, with the supporting cast getting their moments. The fantasy elements mix into the idea of ghosts working on their own motivations to work with the living family.

Settings – Most of the film is set in the mansion, we get endless secret passages and secrets that could unlock the truth about the mansion’s past.

Special Effects – The effects used in the film are strong, they are used to help add to the family friendly style the film is using. 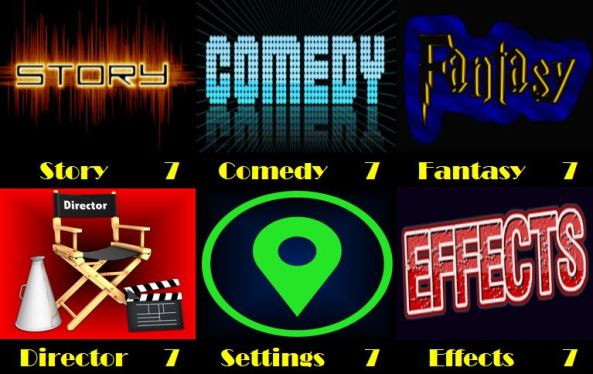 Scene of the Movie – Enter the crypt.

That Moment That Annoyed Me – We see how Jim operates at work, it would have been nice to see how Sara works too.

Final Thoughts – This is a fun family film that will get the laughs required, it isn’t going to set the world a light, but can be enjoyed in the similar style as a Casper movie.