Head Over to Movie Rob’s site for more reviews here. 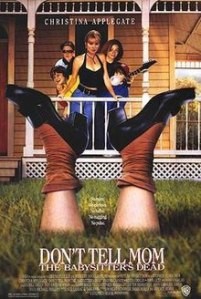 “[to Sue Ellen about their mom] Stay away from her, she’s in one of her Terminator moods.” – Kenny Crandell

Brief Synopsis – After their babysitter unexpectedly dies, a family of kids decide to look after themselves while their mother is away for the summer.

My Take on it – This is actually a film that I recall hearing about when it came out, yet never had much of a desire to see what it was all about until now.

The story is actually quite fun even if things are bit too clichéd and far too 90’s the whole way through.

Christina Applegate does a nice job here in her first lead role and proves that she is proves here that she is much more talented than one would assume by just watching her in Married With Children on TV.

They do a nice job setting up and developing the various characters so that they all seem quite distinct even of they still feel like stereotypes part of the time.

This is a film that definitely has its moments along the way, but it’s a bit too formulaic for its own good and it shows.

Bottom Line – Fun film that works despite the story being a bit too clichéd. Applegate is great in the lead role and is able to show that she is much more talented than most people would think if they just saw her in Married With Children on TV. The story is set up quite cleverly and they manage to find distinct personalities for the various siblings that make them all stand out. The film has its moments even if overall, it does everything “by the  book.”

MovieRob’s Favorite Trivia – When the movie was released on video, it had a contest in which participants would answer a number of questions about the movie related to movie trivia, as well as rating various actors’ performances. The winner, whose answers matched up the best with an official set, would win the babysitter’s car. (From IMDB)