Plot: Anne Hutchinson’s troubled relationship with her missing sister is under alien tribunal. Meanwhile, her new roommate’s mysterious illness causes her to go on a cannibalistic killing spree.

Tagline – Some roommates are a real nightmare.

Story: Sister Tempest starts when Anne (Russell) is taken by an alien race to recount her life style, which will see her raise her younger sister Karen (Bonney) who mysteriously goes missing, leaving Anne the art teacher alone in her home, trying to guide the students.

The story includes how Anne took in student Ginger (Gregg), while being caught up in a series of strange events, which will leave her question each part of her life.

Final Thoughts –Sister Tempest is one of the most unique movies you will see this year, it is filled with a host of seemingly random sequences, that do eventually add up, but seem out of place at times. Sister Tempest does seem to lead you down one path, only to pull the carpet right from under you and send you in a completely different direction, one that is filled with something you wouldn’t have even imagined it going. We have so many different elements going on here, with horror, sci-f, comedy, musical, action, we tackle plenty of genres through the story telling process that will leave us more surprised with what happens, but it would be fair to say this film is one that could have some time trimmed off. This will go down as one of the most unique and strange movies you will see this year and will be one that will leave you scratching your heads, wanting to go back and see it again. 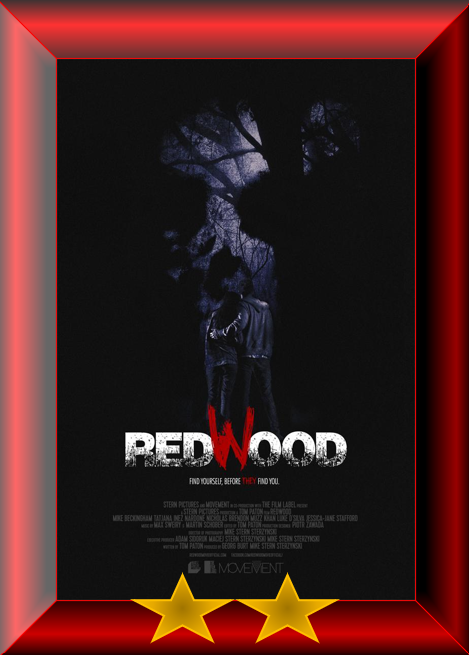 Plot: A couple hiking out in the woods, disturb a nest of vampires.

Story: Redwood starts as a couple Josh (Beckingham) and Beth (Nardone) head away for a hiking trip to get back to nature before Josh start his treatment for leukaemia, the pair meet ranger Steve (Khan) who warns them to stay on the path and the two set off on their adventure.

The couple see a chance at a shortcut up the mountain, which sees them go off the trail where they run into bloodthirsty vampires forcing them to battle to survive.

Characters – Josh is a workaholic that has just discovered he has leukaemia, which sees him want to do more open to nature, which sees this hiking trip come about, he is dealing with everything well believing everything is under control and he suggests the shortcut off the trail. Beth is the supportive girlfriend that is getting scared about what is happening to Josh, wanting to get the most out of their time in case the treatment doesn’t work. Vincent and Steve are both rangers that are met on the way up the mountain, both have the same warning about staying on the trail.

Performances – Mike Beckingham and Tatjana Nardone both are solid enough through the film, we get the ideas of how their relationship is facing a new problem, with how they are both trying to stay strong. Anybody we meet is simply a cameo like performance.

Story – The story here follows a couple that head off on a hiking trip on a mountain range only to head off the trail and find themselves facing off against vampires. This is a typical type of story which follows a couple making the mistake of going of the trail, there really isn’t much more to the story, we do have the relationship strain between a couple when one could become terminally ill. Once we get to the vampire side of the story, we just don’t get very much going on because by the time we get to the vampire side of the story, it is just running without doing much. We don’t get much out of this story by the end.

Horror – The horror in the film does feel weak because we have a couple of moments which is mostly just running, with the emotional drama seeming to take centre stage.

Settings – The film is set in a mountain range which shows us just how far the couple have gone to get back to nature, it could have mystery about it.

Special Effects – The effects are simple when it comes to the vampire creations, we don’t need too many effects either.

Scene of the Movie – Getting to the top.

That Moment That Annoyed Me – Too much talking.

Final Thoughts – This is a poor vampire movie that tries to do something bigger, but ends up dragging along way too long.

Plot: 1840s England, acclaimed but overlooked fossil hunter Mary Anning and a young woman sent to convalesce by the sea develop an intense relationship, altering both of their lives forever

Story: Ammonite starts as we see the fossil hunter Mary Anning (Winslet) living off the coast where she searches for the fossil, with her mother Molly (Jones), they are seen as the outsiders in the village, until a scientist Roderick Murchison (McArdle) and his wife Charlotte (Ronan) arrive in town looking to learn off her.

When Roderick goes on his own expedition, he asks Mary to watch of Charlotte, as she is recovering from her own illness, leading to the two reluctantly spending time together, changing both of their lives.

Characters – Mary Anning is a fossil hunter that has been living her life away from the traditions for her whole life, she is famous in the community for her work, living with just her mother off the coast, where she finds the most fossils, she doesn’t communicate too much with the rest of the town and doesn’t have people skill, preferring to work alone than with people. She reluctantly agrees to watch over Charlotte, while her husband is away, leading to an unlikely friendship between the two. Charlotte Murchison is the wife of Roderick, the pair have suffered their own loss of a child, leading to Charlotte losing the sparkly she once had, she needs to recover with the time on the coast being the medicine prescribed to her. She does start to come back out of her shell, once she spends more time with Mary. We don’t meet too many more characters, we have the husband Roderick who is trying to help bring his wife out of her depression, Dr Lieberson who helps when Charlotte gets ill and Molly Anning the mother of Mary who is stuck in her own ways.

Performances – Kate Winslet and Saoirse Ronan are both wonderful in the leading roles, showing the pain in life they have both been through, as well as the hope they bring each other.

Story – The story follows a lonely fossil hunter that is asked to look after the wife of a fellow scientist with the two slowly starting to spend time with each other and falling in love, opening their eyes to what could come from life. The story does follow the formula you would expect it too, it does show us the everyday almost boring to film routines the characters go through, holding back the excitement from life, highlighting the slump both women are going through. We do get to lean more into the forbidden love for the time and era, but otherwise we have seen the story unfold before.

Biopic/Romance – We don’t learn that much about Mary Anning from a true professional stand point, which is more disappointing, with the romance side of everything being what we have seen before from the love involved.

Settings – The small coastal town makes us see the type of life that Mary wants, away from the world, close to her work.

Scene of the Movie – The fossil hunt.

That Moment That Annoyed Me – Nothing new.

Final Thoughts – Ammonite has brilliant performance, a well crafted world inside a tried and tested story that doesn’t do anything wrong.