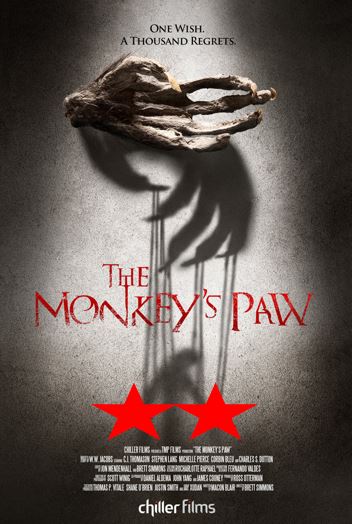 Plot: Jake is given a Monkey’s Paw that grants 3 wishes. After the first 2 wishes leave his friend Cobb undead, Cobb pushes Jake to make a final wish.

Tagline – One Wish. A Thousand Regrets.

Verdict: Not What We Wished For

Story: The Monkey’s Paw starts when a group of mechanics Jake (Thomason), Cobb (Lang) and Catfish (Bleu) are dealing with the firing of one of their co-workers with a few drinks, Jake ends up receiving a monkey paw which will grant him three wishes, like any young person, his first wish is for a car, while after an accident he must use the second wish to bring Cobb back to life.

When Cobb does come back to life, he starts going on a killing spree, wanting to get the monkey paw off Jake to have his own final wish, while Jake needs to find a way to end the bloodshed.

Thoughts on The Monkey’s Paw

Characters – Jake Tilton is a mechanic that has seen his life become mundane, he supports his co-workers with one getting fired, he is having an affair with his boss’s wife and when he is given a monkey paw, he only asks for a car. This is just the beginning of his life-changing experiences, first his best friend is killed and after wishing he would return from the dead, he must stop him before it is too late for his loved ones. Tony Cobb is the best friend of Jake, he works with him and has done for years now, the two enjoy a drink or two, which sees him dying, he comes back from the dead to put his own life back together which along with a darker side which will see him kill anybody that gets in his way. Olivia is the woman Jake that is having an affair with, which after her husband disappears, makes him a suspect, she does love him though and is planning to leave her husband. Catfish is the fellow co-worker that tries to push Jake into lighter view on life.

Performances – C.J. Thomason in the leading role as the everyday man struggling with the guilt a monkey paw’s consequences could have on his life does well enough, we see him slowly breakdown while being nervous in life early on. Stephen Lang is the highlight of the fil, with his performance as the psychotic figure being a joy to watch, carrying the film through the extremes his character goes through. Michelle Pierce leads the supporting cast that struggle to get any impact on the story.

Story – The story here follows a man that is given a monkey paw which is meant to give them three wishes and soon he is left in a difficult position when it comes to what to do with the final wish to be after bringing his friend back from the dead. When it comes to film where we give a person a chance to wish for anything, we usually get moral dilemmas which this story does have moments where we should have them only to gloss over them not giving any thought to what is going on. We have a psychotic figure going on a killing spree which only confuses things more because he is acting like he has no soul, though his motivation is a human reason. In the end the story doesn’t give us enough time to process the wish making process, has dramatic character twists that don’t fit the tone of the film.

Horror – The horror comes from the moments Cobb is terrorising people, we do get the blood level, but never the scary factor.

Settings – The film is set in a small Florida town which sees everybody know each other, making the killing spree have an impact on the people of the town.

Special Effects – The effects in the film are solid when it comes to gore effects, with one standout moment being shocking, while the rest is often hidden off camera. 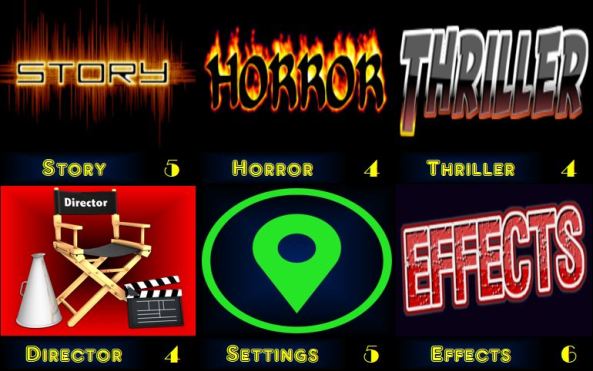 Scene of the Movie – Don’t split up.

That Moment That Annoyed Me – Not going through the consequences discussion.

Final Thoughts – This is a wishes can go bad if you don’t think movie, with the deadly consequences showing us just how dangerous not thinking can be.