Plot: A rare family night for Jay takes a brutal twist when he awakens in a basement with three other prisoners. As their vengeful captor runs riot, Jay engages in a twisted battle to solve the puzzle to his past and save his family’s future.

Story: The Dare starts when Jay (Edwards) a family man is taken in a home invasion, which sees him locked up in a basement with Adam (Short), Kat (Evans) and Paul (Schutzmann) who are routinely put through torture by a masked man.

While Jay tries to figure out the truth, we see how a young boy Dominic was captured by the sadist Credence (Brake) who forced him to work for him, trying him to be a fighter, all which has a connection to why the four people have been abducted.

Thoughts on The Dare

Characters – Jay is a business family man that is often away on business more than he should, he ends up being taken in a home invasion, locked in a basement with three other people, he tries to plan an escape, despite getting warned by the rest about the dangers involved. Adam and Kat are the other too awake victims that show the warnings and usually have to go through the suffering for Jay’s mistakes. The masked killer slowly prepares each thing he will do to them, he is bigger, more powerful and cast an imposing presence over everyone else. Credence is a man that has been training a young boy to get rid of evil, he is strict and usually ends up punishing him for his failures.

Performances – When we dive into the performances, Richard Brake gives us the most captivating of the cast, as you want to see what this strict sadist person is willing to do, everyone involved with the room doesn’t have much to work with through the film, just playing into the generic figures of who might be the victims.

Story – The story here follows four people trapped in a basement who have an imposing figure put them through torturous punishment, while we get flashback to what drove this man to become the way he is. This is a story that doesn’t seem to give us any characters to have any sympathy for, as it shows that the potential victims are part of a sadistic revenge plot, which has more plot holes than could be imagined to reach the levels of how everything unfolded, with twists that just don’t seem to connect enough, leaving us watching a story that would rather focus on the blood spilled over the story unfolding.

Horror/Mystery – The horror in this film focuses on the torture that the victims are being put through, with most coming from camera that hides away the complete graphicness of everything, with the mystery being about why the people have been selected.

Settings – Most of the film takes place within the basement, the four walls the four people have become familiar with, along with the flashbacks which does have a more open world that does seem to be closing in around the younger version of the killer.

Special Effects – The effects are focused on the actual injuries, though we don’t seem to see any aftermath on them.

That Moment That Annoyed Me – Cheap final scene.

Final Thoughts – This is a blood soaked revenge thriller that focuses more on the blood and gore, than giving us characters we can actually care about. 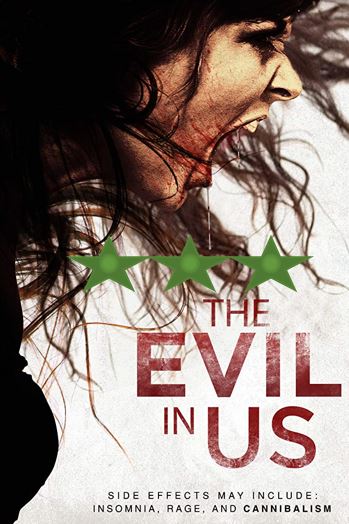 Plot: While on a fourth of July holiday, six best friends fall victim to the insidious plan of a mysterious organization when they are unknowingly transformed into bloodthirsty cannibals.

Story: The Evil in Us starts when six friends Brie (Howard), Steve (Zaporozan), Bash (Fazlali), John (Collins), Trish (Bush) and Roxanne (Pasqua) head to a family holiday home for the 4th July celebrations, while the young people have fun, the police are busy investigating a series of murders which has left the one victim still alive.

When John starts acting strange, we learn that he did have a connection to the murders and the cult around the vacation home keeping people locked up only leaves us waiting to see what will happen when everything gets unleashed.

Thoughts on The Evil in Us

Characters – Brie is the newest member of the friends, she is the girlfriend to Steve and this vacation is the chance for her to meet his friends for the first time, she is in the position where she needs to be on the friendly side of things compared to the banter heavy friendship between the rest. Steve is the one that brings his girlfriend to meet his friends for the celebrations, this will be a problem for most of the friends, we barely learn anything about who they are, Bash is the one whose return they are celebrating while John is the one with the connection to the previous incident. The other two woman are slutty one and the one we barely even learn their name.

Performances – The friends do have good chemistry together which is important for the film and the actors only make this happen, they don’t have too much else to do which does hold back certain parts of their performances.

Story – The story follows six friends dealing with something that turns them into cannibalistic crazed humans willing to eat their own friends as the problem spreads. Now this is an interesting enough idea, it works, the problems come from watching the police investigate the previous incident which shows us the aftermath of what could happen and showing the group behind what is happen conducting their experiments. We are given too much information for what should be a bloody horror with elements that could be bought into the story much later to give us a shocking reveal.

Horror – The horror comes from what happens to the characters when they become raged looking for blood which see us get the blood required to make this shocking when friends are the ones which turn.

Settings – The film keeps us in a couple of settings, the remote vacation home gives us the isolation needed for the characters, while the group with the experiments shows us how secretive they must be.

Special Effects – The effects in the film are wonderful, we get to see the full brutality of the wounds inflicted upon the characters through the film.

Scene of the Movie – Unleashed first moment between friends.

That Moment That Annoyed Me – Too many side stories not connecting.

Final Thoughts – This is a bloody filled horror that has plenty of positive points, the problem start when we are forced to focus on too many subplots which drags us away from the main action.