Plot: Summerland is a road trip comedy that follows Bray, a teenager who poses as a girl on an online dating website. He falls for a guy who he believes is in the closet. Bray and his best friend Oliver plan a trip to SUMMERLAND, a music festival to meet him. The only problem? Bray is pretending to be his best friends girlfriend, who ends up coming on the trip with them.

Story: Summerland starts as three friends, Bray (Ball), Oliver (Saper) and Stacey (Phillips) look to have one last road trip to a music festival for the last time before they go their sperate ways after school, Bray has arranged to meet a guy there, Shawn, who believes that Bray is Victoria, or Stacey, while Oliver and Stacey must make the big decision about their relationship and whether they can handle the long distance it will give them.

Characters – Bray is a gay teenager, he has struggled to find a relationship and is looking forward to going away to college to let himself discover more, he has tried to start a relationship over a dating site, pretending to be his best friend’s girlfriend and now the adventure is his chance to meet him in person. Oliver is Bray’s best friend, he is about to return to England though, which sees him needing to find the right time to tell Stacey, he is considered more of a flake between the friends, doing silly things which can cause more problems for himself. Stacey is the girlfriend that isn’t sure what will happen next in her life, preparing to start a life with Oliver even if she knows he could be wrong, she is used by Bray to attracted men his way too.

Performances – The three leads are a delight to watch, Chris Ball, Rory J Saper and Maddie Phillips are all showing the reality of the difficult decision they are facing in life.

Story – The story here follows three friends who head across country for a music festival before entry the next stage of their lives after school, where they are looking for love. This is a coming-of-age tale that shows us just how difficult entering adulthood can be, showing how mistakes can leave people broken and how the adventures you have with friends will be memories for life, no matter how many different paths you take together. While most of the adventure is what we would expect to see, it is a journey that will help people define their lives.

Comedy – The comedy in this film comes from seeing how the three’s adventure goes off track in places, usually ending in a moment that will lead them to an extra laugh for the memories.

Settings – The film uses the settings to show us just where the friends end up going, be it the beauty spots, the big city or the festival, each one will end up giving them a story.

Scene of the Movie – The Waterfall.

Final Thoughts – This is a wonderful coming-of-age story that tells us the importance of making memories, even if you are going in separate directions in life.

This is under H because of director John Hughes. 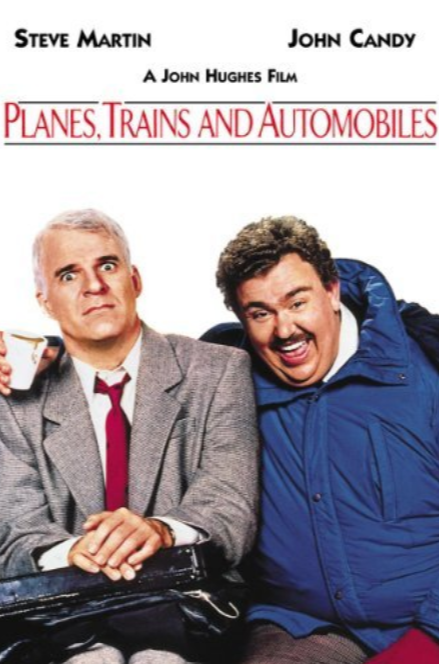 Plot: A man must struggle to travel home for Thanksgiving with a lovable oaf of a shower curtain ring salesman as his only companion.

Tagline – Pack in the Laughter!

Story: Planes, Trains & Automobiles starts when businessman Neal Page (Martin) who is trying to get home from New York for Thanksgiving, he first misses his taxi with Del Griffith (Candy) taking the cab, and his plane gets diverted to Wichita, where Neal must trust the help of Del to get home.

The unlikely pair clash, with Neal wanting to keep himself to himself, while Del is always wanting to chat, with connections all the way home, only things don’t always go to plan.

Characters – Neal is a successful businessman that has to get home for Thanksgiving from New York, he has it planned, but gets caught up in the middle of rush hour traffic, missing his plane home, where he sees his plane is diverted an dis left with mild-mannered happy go lucky Del. He constantly tries to ditch Del, but the two keep meeting and helping him along the journey. Del Griffith is a travelling salesman, he is always smiling through life, which rubs Neal the wrong way. The two constantly clash together. We do meet the colourful characters they meet along the way, who are played more for laughs than anything else.

Performances – Steve Martin does work well as the stuck up businessman, while John Candy as the ever positive character gets to bounce of Martin well through the film.

Story – The story here follows one man trying to get from New York to California in time for Thanksgiving, only everything goes wrong along the way and an unlikely friendship starts between him and a travelling salesman. This story does focus too heavily on Neal’s life and what he wants, which does play into his selfish nature, we get the idea that Thanksgiving will bring out the crazy in people who are trying to travelling across country and what it means to get there, while neglecting the big heart that we don’t see until the final act. We seem to focus on a situation for laughs, rather than furthering the story too, which just makes it an simple one to watch too.

Comedy – The comedy is hit or miss really, we have the occasional strong moment, while the rest seems to focus on forced laughs which don’t always come.

Settings – The film is a road trip movie, so we do see our characters in plenty of different locations, which usually all including somewhere travel related.

Scene of the Movie – I want a car.

That Moment That Annoyed Me – It doesn’t get the heart side of the film out enough.

Final Thoughts – This is an easy to watch comedy that tries more for laughs than the heart it wants to push to front and centre.

Gnomeo & Juliet meets Trolls, The Elfkins is a funny, colourful and uplifting story about being accepted no matter how big or small you are.

For more than 200 years, the Elfkins have been living under ground, hiding from the upper world and avoiding any interaction with the human beings. But one day a small but fearless gnome, together with two of her best friends, climb to the earth’s surface to discover that not all is doom and gloom and find their true purpose in life; helping others!

Head over to Movie Rob’s site for more reviews. 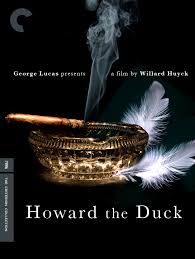 Brief Synopsis – An anthropomorphic duck from another planet is transported to Earth and must find a way back to his home world.

My Take on it – This is a film that I had avoided watching for 34 years since I never heard anything good about it.

This film has a strong cult following and based on the story and the way that they present things, I’m not surprised by that at all even if it is far from being my kind of film.

This movie is terrible and has very few reasons to watch it.

The story relies far too heavily on special effects and the poorly done animatronics doesn’t help make it any more enjoyable to watch unfold because it seems far too unrealistic as presented which is quite a shame.

The story is done in a really boring way and fails to find a way to stay interesting at all.

The tone is constantly off the whole way through which also hurts this far too much.

George Lucas produced this film and that alone says so much about the kind of potential that he believed this story had.

Unfortunately for him, it was a box office bomb and it all comes across as being far too silly.

The film has a talented cast who are completely wasted here.

Lea Thompson, just off her success in Back to the Future (1985) is really wasted in the co-lead role here which is so unfortunate because she had so much potential as an actress that was squandered with this role.

Jeffrey Jones and Tim Robbins are also great actors but aren’t given enough to do here.

The look of Howard the Duck is so unrealistic that it’s quite laughable due to the way that they present things here.

Bottom Line – Horrendously bad movie that has very little saving graces. The story itself is quite boring and the tone is off kilter the entire way through. The special effects are passable, but the animatronics don’t seem to work well enough which makes things look even more unreal which is a shame. The fact that Lucas produced this film for his new Production Company says so much about his hopes for this movie working much better, but it was a complete box office bomb due to the silliness of it all. The cast is completely wasted in these roles especially Thompson who had so much promise. I can definitely understand how this film could gain a cult status, but it is not my kind of thing at all.

MovieRob’s Favorite Trivia – According to reports at the time of the movie’s release, George Lucas had just built the $50-million Skywalker Ranch complex, and was counting on this film to get him back in the black. When it bombed, he was forced to start selling off assets to stay afloat. His friend Steve Jobs, the CEO of Apple Computer, offered to help by buying Lucasfilm’s newly-launched CGI animation division for a price well above market value. Lucas, in desperate straits and thankful for the assistance, agreed. That division eventually become Pixar Animation Studios. (From IMDB)