Head Over to Movie Rob’s Site for more Reviews 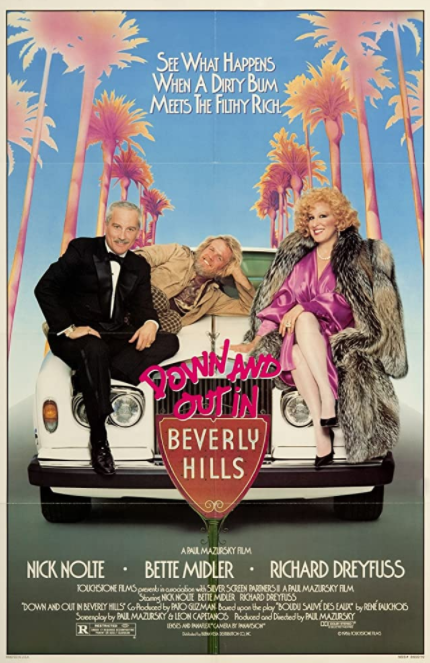 “Oh, come on! The dog is running the whole house! ” – Dave Whiteman

Brief Synopsis – A down on his luck homeless man tries to commit suicide in the pool of a wealthy family and forms a bond with them after he is saved.

My Take on it – This is a movie that I’ve known about ever since it first came out 34 years ago, yet never had much of a desire to see what it was all about.

This month’s theme helped me decide to finally tackle the movie and see if my instincts were correct to avoid it for so many years.

The overall premise is definitely intriguing, yet they never manage to finds a way to keep things flowing more fluidly.

The film sports a great cast with Nick Nolte, Richard Dreyfuss and Bette Midler all doing nice jobs here, but even they can’t help make things more enjoyable to watch.

The main premise of the story is that social classes are all based solely on perception an one can easily move between them when needed.

The story itself moves along and a fairly good pace, yet constantly brings up some very strange aspects of the story which take away from things too much.

This does allow the characters to actually do some very crazy things but it all comes across quite uneven with some of the aspects working so much better than other ones.

The story itself is a bit too inconsistent and it therefore has a lot of trouble holding the audience’s attention for too long at a time.

The final third of the film works too hard to put things together far too neatly which hurts the credibility and reliability of things whole also detracting from the believably of it all.

Bottom Line – Intriguing idea that just doesn’t work well enough, The cast is great and they do a nice job of showing that there really isn’t much of difference between the social classes. The story moves in some very strange directions and this allows the characters to all do some very crazy things; some work much better than others tho. The story unfortunately doesn’t manage to hold on to things very well, and it all fits together much too neatly by the end to seem believable enough.

MovieRob’s Favorite Trivia – Nick Nolte spent five weeks as a homeless person in preparation for his role. (From IMDB)