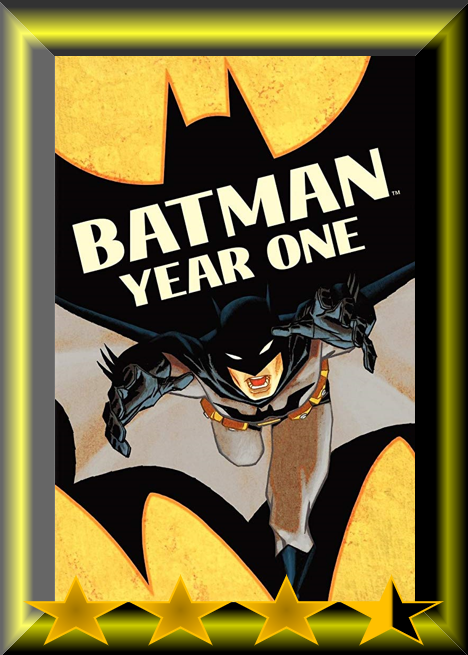 Plot: A wealthy playboy and a Chicago cop both return to Gotham City where their lives will intersect in unexpected ways.

Tagline – A merciless crime – turns a man into an outlaw.

Story: Batman: Year One starts when Jim Gordon and Bruce Wayne arrive in Gotham, one to start a new career, the other returning for the first time in years. Jim joins the force and sees just how corrupt the force is in this city, where he must wait for his time to bring them down, while Bruce is taking his first steps into fighting crime him own way.

When Batman starts building his vigilante reputation, Gordon is assigned to track him down and stop him from taking control of the city. Gordon must face him and learn that the two might want the same thing for the city.

Thoughts on Batman: Year One

Characters – Jim Gordon is the new lieutenant in Gotham City, he is here to start a new career with his pregnant wife, with his previous life showing him to have been the one to expose corrupt police officers, now in the middle of a corrupt department, he must wait for his time to bring them down, no matter who comes for him. He must decide whether Batman is going to be a threat or not. Bruce Wayne has returned home after years his parents death and wanting to start fighting crime, he has started small before evolving into the Batman, taking on the biggest crime boss in the city, he might be seen as the enemy, but shows his true colours. Selina is a small time criminal that has been waiting for her chance to make the most of the criminal uprising, seeing that Batman could be doing the right thing. Commissioner Loeb is the man who has been accused of being corrupt and now he has it covered up until Jim arrives to try and make the most of everything before losing everything he has worked for.

Story – The story here follows one year in Gotham city as we see how the rise of the Batman and Jim Gordon through the police force dealing with the criminals both in the police force and the criminal underworld. The story does highlight how they both want to do the right thing in different ways, but both don’t want to turn to murder. They do also see enemies come from different directions in their lives too. The strange way this film plays out is when we see just how the time flies, we do have a couple of scenes which are literally one line and jump to the next week, which does make this feel rush, making you think it could have had a lot more in the story.

Action/Crime – The action does mix with the crime, because it shows how both sides are fighting for what is right with bodies flying around the scenes.

Settings – The film takes us to Gotham city which we all know is the iconic location that is known for the Batman to be set in.

Animation – The animation style is great to see and will always work for the darker Batman stories.

Scene of the Movie – Batman escape.

That Moment That Annoyed Me – The certain random scenes to show a sentence.

Final Thoughts – This is a great dark Batman story which does show the origin of both Batman and Jim Gordon in there one year after returning and arriving in Gotham.