Story: Starship Troopers starts in a world where humans are not at war with a bug planet across the galaxy, students and young people are expected to join the federal service to become citizens. Johnny Rico (Can Dien), Dizzy (Meyer), Carl (Harris) and Carmen (Richards) all have their sights set on enlisting, Johnny and Dizzy are mobile infantry, while Carmen has bigger sights of being a pilot and Carl has his sights set on military intelligence, with his mind reading ability.

While Rico is going through his training and constant battles with the flashy Ace (Busey) battling for squad leader, Carmen is flourishing in the flight academy, but this is just training, now they must go into combat against the giant deadly bugs.

Characters – Johnny Rico comes from a wealthy family that want to send him to Harvard, but he has other plans, he wants to become a citizen, which means he must join the military, here he excels in training until a mistakes sees him disgraced. He loses his family and will remaining fighting under a new squad leader, proving himself as one of the best soldiers in the infantry. Dizzy has spent her school life crushing over Rico, she follows him to mobile infantry, proving herself as one of the best soldiers. Carmen is the girlfriend of Johnny’s through school, she has set her sights on becoming a pilot in the Starfleet, something her grades could make easy for her, she proves an asset to the fleet rising up the ranks with ease. Ace is the rival of Rico’s in training, they both want squad leader and with the rivalry they become brothers in arms.

Performances – Casper Van Dien in the leading role makes himself remember forever with his character, this will define his career without question. Dina Meyer shines too, while this cast is fantastic and understands just what movie they are in. Denise Richard has been criticised before, but here she works in the modern future world and Jake Busey add more comedy as times to his role.

Story – The story here takes us to the future where humans are waged in a war with bugs from across the galaxy, we see how the soldiers and pilots are dealing with the increasing threat they are going to be facing. This story does present itself in a satirical look at the military behaviour and how it can become a propaganda machine forcing young people into joining under false promises, it also shows how humans will always look to conquer another area no matter how outnumbered or out of place they are in their invasion behaviour. Plenty of this story over accentuates the idea of what is going on, which will add moments of comedy.

Action/Sci-Fi – The action in the film is war style military attacks with laser bullets flying literally everywhere and the bugs ripping bodies apart. The sci-fi side of the film shows us just how far the human race has come with transportation across the galaxy, despite not giving them the brains when it comes to war.

Settings – The world created is fantastic with Earth looking futuristic without being all that different, while the bug planet feels like a battleground.

Special Effects – The effects in the film are also flawless, with a mix of practical and CGI which barely look like they have dated even after being over 20 years old. 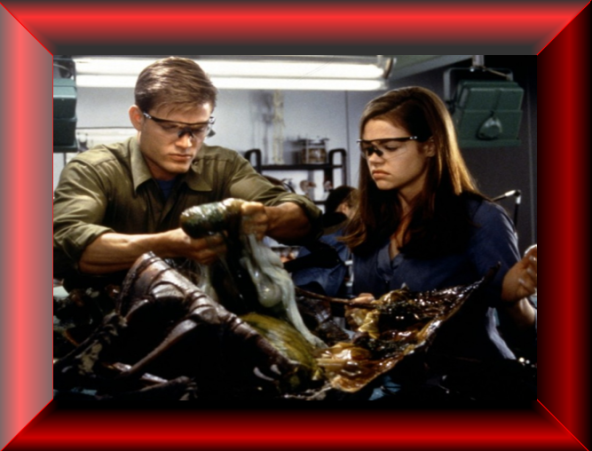 Scene of the Movie – The first battle shows the scale of the war.

Final Thoughts – This is one of the best sci-fi films you will see, it is wildly over the top and doesn’t miss a beat with style that knows just what the film is meant to be.