Plot: A man tries to transport an ancient gun called The Mexican, believed to carry a curse, back across the border, while his girlfriend pressures him to give up his criminal ways.

Tagline – love with the safety off

Story: The Mexican starts when small time crook Jerry (Pitt) is forced to head to Mexico to collect a gun for mob boss Bernie Nayman (Balaban), only this mission goes wrong when he loses the gun and is let stranded in Mexico trying to locate it.

With the bosses not happy that he has failed they send Winston Baldry (Gandolfini) kidnap his ex-girlfriend Samantha (Roberts) to locate him and the missing gun known as the Mexican.

Thoughts on The Mexican

Characters – Jerry is a small-time crook that has been in the debt of crime boss for years, with his latest and seemingly last chance sees him travelling to Mexico to locate a famous pistol. He has a short attention span which has gotten him trouble before and this is no different, he needs to clean up his own mess before finding himself wanted by the crime bosses. Samantha is Jerry’s ex-girlfriend that gets forced in work with a hitman to locate Jerry against her wishes, she just wants a normal life instead of being part of the crime world. Winston is the hitman that forces Samantha to help him locate Jerry, while learning to expression his own feelings. Arnold Margolese is the man that has been left in jail thanks to Jerry’s sloppy mistakes, he is making Jerry make up the time he is lost.

Performances – Brad Pitt does bring us a wonderful comic character that plays into the cool persona that he had at the time, Brad mixes both the styles together to make his performance standout. Julia Roberts showed that she was a powerhouse in film during the 2000s, she brings everything to this performance to make her a supportive character. James Gandolfini brings us a twist on the hitman role which is against everything we have seen him play before. Gene Hackman might only have a smaller role, but he makes the most of his screen time.

Story – The story here follows a clumsy crook who is sent to Mexico in search for a gun for his boss, the gun has a history which many different people want, which drags his girlfriend into the mix as they get caught up in a bigger chase for the gun, letting the two put aside their differences and finding out how they really feel about each other. This story is one that has plenty of twists and turns along the way, like any interesting crime adventure film, we see how Jerry always manages to get himself into more trouble no matter what and how Samantha is always going to be the one that puts him back on the right path. We have a lot of details that are added to create the characters which keeps the film flowing with more information as each scene unfolds.

Adventure/Comedy/Crime – The adventure side of this film takes Jerry to Mexico where he never feels comfortable or look like he should be there, the crime world shows us just how man people would be after the legendary weapon that the bumbling criminal is set to get. The comedy in the film comes from the actions of Jerry which always make him look out of place.

Settings – The film shows us how the shady looking street around Mexico which shows just how out of place Jerry looks.

Scene of the Movie – Leroy changes a tyre.

That Moment That Annoyed Me – It could sometimes have too many different subplots going on within the world.

Final Thoughts – This is a fun adventure that shows just how entertaining a crime comedy can be with its multiple different branches.

We are under the U because of the Unikitty character. 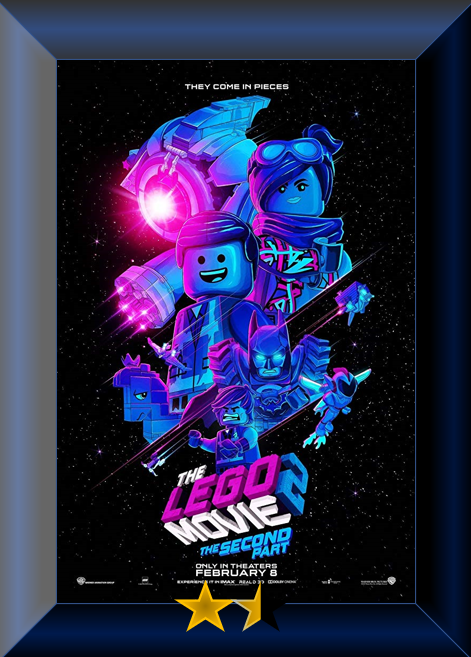 Plot: It’s been five years since everything was awesome and the citizens are facing a huge new threat: Lego Duplo invaders from outer space, wrecking everything faster than they can rebuild.

Story: The Lego Movie 2: The Second Part starts in the aftermath of the Duplo invasion, where Emmet and Wyldstyle are living in an apocalyptic version of the Lego world. After General Mayhem arrives, she takes Wyldstyle, Batman, Benny, MetalBeard and Unkitty for her leader Queen Watevra Wa’Nabi who wants them for a ceremony.

Emmet needing to fix his mistake again, goes in search for his friends, meeting Rex Dangervest as he looks to save the day once again.

Thoughts on The Lego Movie 2: The Second part

Characters – Emmet is still the overly positive character who has always tried to stay happy even after what has happened, he is still naïve about life, which sees him cause more problems, leading him to go out on his own to try and save the day, even though Wiyldstyle will do most of the work. Wyldstyle is still the tough nonsense figure and love interest to Emmet, who will always look to fight to keep the friends safe, including trying to toughen Emmet up. Batman does continue to be the one that always sthinks he saves the day even if he doesn’t actually do anything useful. Queen Watevra Wa’Nabi is the ruler of the new world that has taken the friends to perform a ceremony.

Story – The story shows the next chapter in the adventures of the Lego figures, which does take them to a new level to new worlds and still need to protect each other from the danger. Where the story here falls shorter, is by trying to build on the real world situations instead of trying to give us a more natural Lego story. We fail to get a new annoyingly catchy song through and everything that happens just feels like more of an advertisement for the Lego products over telling a real story.

Action/Comedy – The action does try to be bigger, only it ends up feeling a lot small, because we only focus on big destruction moments over anything else, with the comedy missing more than it needs to.

Settings – The film uses other Lego worlds to create new settings, which is fine I guess, only it just doesn’t add to much.

Animation – The animation side of the film looks like it is what we would expect form a company like the ones behind it.

Scene of the Movie – Couldn’t Find one.

That Moment That Annoyed Me – The overuse of the real-world.

Final Thoughts – This is a poor sequel to a fun original movie, that doesn’t have a feel-good factor like first time and ends up wanting to rip off Toy Story more than anything.