Story: Yes, God, Yes starts as we meet Alice (Dyer) a high school student in a Catholic school, who is one of the most innocent, protected girls in the school, she is fully behind the religious side of sex, until after school she finds herself in a chatroom, which opens her eyes to sex for the first time.

While this was a personal moment, her return to school sees the rumour mill spinning that she broke the religious beliefs of her school, seeing even the teachers looking at her differently, even after she decides to go to a religious getaway with her best friend Laura (Reale), only for this to trip to turn disastrous with her friends turning on her, right when she needs them the most.

Characters – Alice is considered the innocent goodie two shoes in her Catholic school, her best friend always has to explain things to her, things that are coming out in rumours, she finds herself in the middle of her own sexual awakening after being in a chatroom, stuck with rumours about her, needing to prove she isn’t what the rumours are saying, while trying to understand the new feelings, without having anyone to talk to about them. Laura is the best friend that is always the more confident, shielding Alice from things in life more than anything else. Nina is the girl Laura looks up to, she is considered the inspiration to the other girls with her work for the church. We do get to see love interest for Alice, the one that starts the rumours about her, the teachers that judge the students actions without hearing their side of the story too.

Performances – Natalia Dyer is in the leading role here, she is wonderful to watch, she ooze the innocent nature in her character, looks nervous about what could happen with the impure thoughts. While Natalia is fantastic, the rest of the cast let her shine in the film.

Story – The story here follows a young lady in a catholic school that has her first sexual awakening and is left with nobody to talk to about it, after being raised in a world where sexual thoughts are considered a sin. This is set in the early 2000s, which helps with the technology we see, AOL Chatrooms, Nokia 3310s and the A/S/L question which only people of the era will understand, it highlights the difficulties people who would have been surrounded by people that never explained sex to them, other than God says it is a sin. Seeing how Alice goes through this alone, becomes interesting, as she does have to deal with the rumour mill, constantly wanting to know what a sexual term that she is meant to have done is, slowly getting more information each time.

Settings – The film uses the setting to show the catholic school to show us just how the rules are strict and how Alice would never know the safe place for her own discussion.

Scene of the Movie – The first chatroom conversation.

That Moment That Annoyed Me – We don’t really learn too much more about Alice’s friends.

Final Thoughts – This is a fun look at how a Catholic school might try to church sex to the students and highlights just how difficult the research would become if they wanted to learn for themselves. 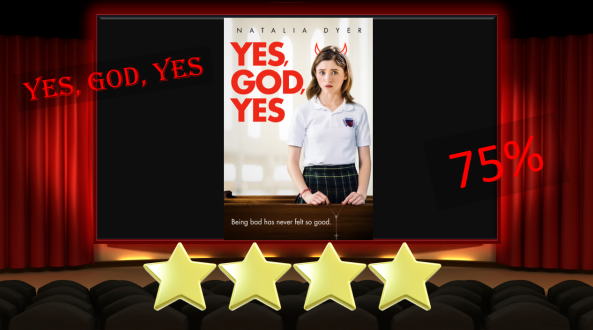