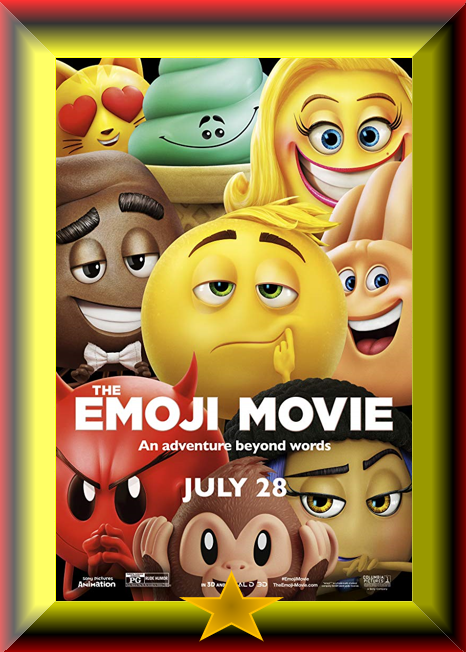 Plot: Gene, a multi-expressional emoji, sets out on a journey to become a normal emoji.

Story: The Emoji Movie starts as we enter the Emoji city where each one has a normal life and work is them being placed on the wall of a phone chat, Gene is the meh emoji and has been waiting for his chance to get put the wall, today is his big chance and he gets scared and breaks the system.

Gene gets exiled and decides he wants to learn what his true emoji calling is really going to be, while the rest of the emojis are trying to delete him, teaming up with fellow outcast emoji HI-5.

Thoughts on The Emoji Movie

Characters – Gene is an emoji waiting for his chance to prove himself as a ‘meh’ emoji like his parents, he gets his big break and cracks under the pressure breaking the system needing to go on the run or face being deleted by the other emojis. He goes on an identity crisis journey. Hi-5 is an emoji that is slowly starting to see his place on the bar slipping away, he joins Gene on the adventure only to get them in trouble more often than not with his interest in anything. Jailbreak is the one that could help solve the problems the two are face, she has her own story to why she has been hiding from the rest of the emojis. Smiler is the one trying to track down Gene, she needs him deleted to save the rest of the emojis.

Story – The story here follows a young emoji that wants to find his place on the text bar only to cause more problems than he possible and must find his identity. Well this story feels like it just completely stole the whole idea of Wreck-it-Ralph just instead of video games, it used apps, most of which I have never used. It is hard to connect to a story that is all about emojis because I barely use them so I barely know what any of them mean either, it does seem to try and imply the emoji have the same emotions or activities as their own shape, while trying to fight individualism.

Adventure/Comedy – The adventure does take us around the emoji world, which seems to be between apps on one phone, but the size of everything seems confusing at time, while the comedy misses a lot, mostly being James Cordon trying to do positive sarcasm.

Settings – The film is set in a phone between the apps, this does seem to show us how one person sees the apps if they were real not if they are real.

Animation – The animation style used doesn’t have any flaws in it, but could do with less flash at times.

Scene of the Movie – Just Dance.

That Moment That Annoyed Me – Bad jokes.

Final Thoughts – This is a bad animated movie, it just doesn’t have anything original in it and just seems to steal the Wreck it Ralph storyline.