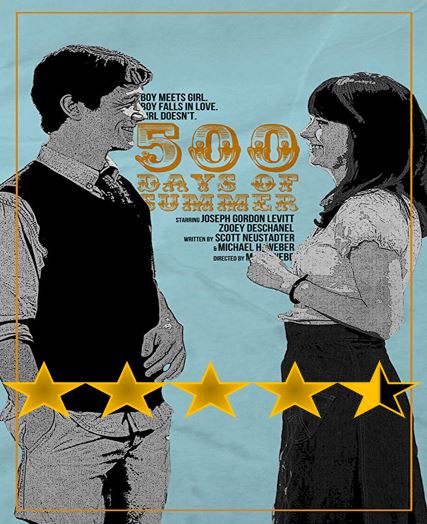 Plot: An offbeat romantic comedy about a woman who doesn’t believe true love exists, and the young man who falls for her.

Story: 500 Days of Summer starts as we meet Tom (Gordon-Levitt), he has just broken up with Summer (Deschanel), this is the 248th day of these 500 Days of Summer. Tom’s sister Rachel (Moretz) is called to help him with the recover process by his best friends McKenzie (Arend) & Paul (Gubler). We proceed to the how Tom and Summer, met started dating along with the aftermath of their relationship.

As the story unfolds, we see the ups and downs the two have through their relationship, showing us how the modern day relationships are more difficult than people think they are.

Thoughts on 5000 Days of Summer

Characters – Tom is a greeting card writer with unrealistic visions of love, he is coasting through life with this job, even though he has a degree in architecture. When he meets Summer, he believes he has fallen in love and we see him at the best and worst moments of the beginning and aftermath of the relationship which will redefine his life. Summer is the new girl to the city and workplace of Tom’s, she isn’t looking for a serious relationship, though she does want friend, which sees her befriend Tom for a casual relationship. She does make this clear from the start which we do see from the subtle signs she is making that this isn’t for the serious moment in life, not ready to follow in her parent’s footsteps. McKenzie and Paul are the two best friends of Tom’s who have been through different relationships, one doesn’t date the other met their wife at a young age. Rachel is the older than she should be younger sister of Tom’s, she is still in school, but seems to know more about relationships then Tom. Vance is the Tom’s boss who treats his staff very well, willing to see they might be going through problems and discussing them with their staff.

Performances – Joseph Gordon-Levitt gives one of the best performances in any romantic comedy film that you will ever see, he makes his character feel like an everyday person that we can relate too. Zooey Deschanel is fantastic too, she has always been able to play the girl-next door with ease and this is no different. The supporting cast compliment the two leads excellently giving us the moments of comedy that we need while handle the serious moments too.

Story – The story here paints the modern relationship through the eyes of Tom, somebody who believed in love only to end up in a relationship with a lady that doesn’t believe in it. We see the beginning where everything is going smoothly and the aftermath, which shows us just how romance isn’t going to be easy to get over. For me this is one of the most realistic looks at love because it shows just how you can fall in love, you can be coasting through life and you need moments in life help put you back on course to reach your own potential. This is easily the most relatable stories you will ever see, it tells us just how difficult love can be in the modern world and shouldn’t be taken lightly.

Comedy/Romance – The comedy in the film mostly comes from the supporting cast, it all hits well giving us the laughs we need to lighten the mood without turning into a laugh out loud scene. The romance in this film shows us just how difficult love can be in the modern world.

Settings – The film is set in the big city, which show how people can come from around the country to be together in the unlikely outcome. 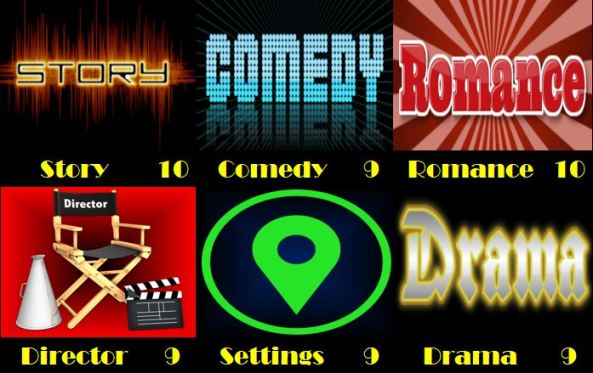 Scene of the Movie – You Make My Dreams Come True.

That Moment That Annoyed Me – The girl at the interviews name, always has pissed me off.

Final Thoughts – This is easily one of the most perfect romance movies in modern cinema, it shows the realistic vision of love unlike most of the romantic movies that are getting thrown out there.