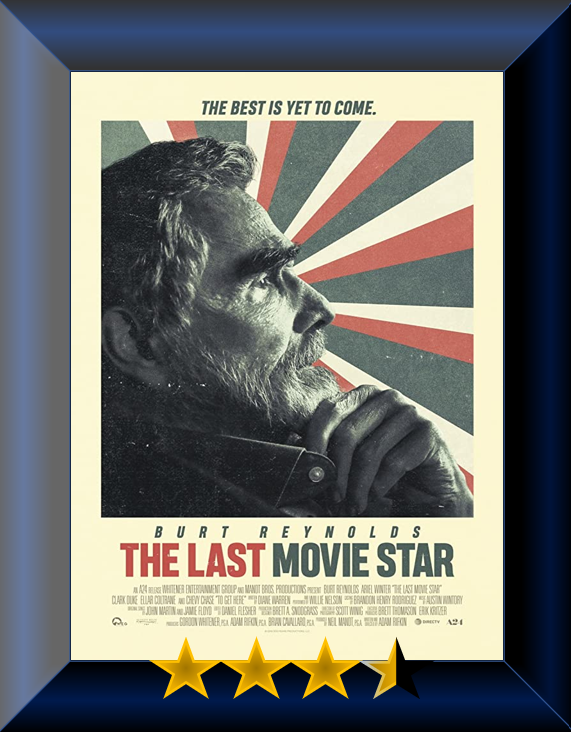 Plot: An aging former movie star is forced to face the reality that his glory days are behind him. On its surface, the film is a tale about faded fame. At its core, it’s a universal story about growing old.

Tagline – The Best Is Yet To Come

Story: The Last Movie Star starts as an aging movie star Vic Edwards (Reynolds) gets offer a chance to be honoured at a film festival, which sees him being talked by his best friend Sonny (Chase) to travel to Nashville for the festival.

When Vic arrives in Nashville, he finds his driver is Lil (Winter) a young woman with her own troubles who is being the driver for her brother Doug (Duke) who is running the festival, only it isn’t the big festival he thought and he ends up using his time to go down memory lane.

Thoughts on The Last Movie Star

Characters – Vic Edwards has had a long career in Hollywood, he has however found himself growing old alone, knowing he doesn’t have much time left and agrees to attend a film festival, only to find it being a small self-funded one by fans, he ends up using the trip to go down memory lane and teach Lil the bigger part of life that she is wasting. Lil is the assistant to Vic for the weekend, she has her own problems, struggling everyday, fighting back against the world. She ends up learning more from Vic that she could imagine, to help her prepare for her life for the first time. Doug, Shane and Stuart are massive fans of Vic who have arranged the festival in his memory to give him a lifetime achievement award.

Performances – Burt Reynolds is fantastic in the leading role, truly showing what it would be to look back on your life and see the best and worst from his past. Ariel Winter is wonderful too, showing how life can bring even the youngest members of society down, with the two showing a strong bond.

Story – The story here follows an aging movie star that attends a film festival in his honour, only to use the time to look back on his life, the ups and downs, where he teaches a young woman about the mistakes she could be making and showing her just what life is all about. The story here shows us what is would be like to look back at life at any age, it shows us just how difficult it could be when you live in a life of regret and that you could find the right path in the most unlikely places. We also get to see what it would be like to be a celebrity that would take too much for granted, needing to learn to become more humble to their fans. We have a lot of heart in this film and it will show us that things can always get better.

Settings – The film uses the settings to show the memory lane Vic goes on, it shows us just how much everything will mean to him, however small things might be.

Scene of the Movie – The festival speech.

That Moment That Annoyed Me – We could have seen more about what the festival means to the fans.

Final Thoughts – This is a touching drama about being grateful for everything you have achieved in life, no matter how big you become and shows what is will be like to meet the fans.