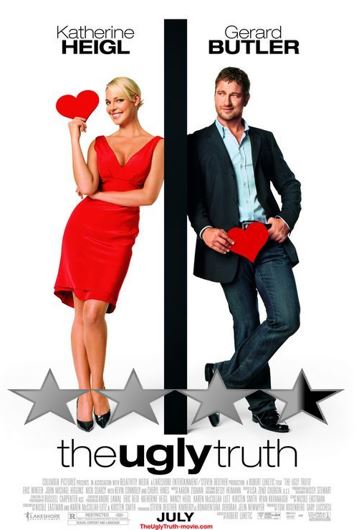 Plot: An uptight television producer takes control of a morning show segment on modern relationships hosted by a misogynistic man.

Tagline – The battle of the sexes is on.

Story: The Ugly Truth starts when an uptight television producer Abby (Heigl) sees her ratings on her morning show getting beaten by nearly every show, her show manager Stuart (Searcy) wants to change the show, his idea is to hire Mike Chadway (Butler) a misogynistic man who hosts a show known as ‘The Ugly Truth’ which tells the brutal truth about relationships.

As the two learn to work together, Mike helps Abby in her pursuit for the perfect man who just so happens to move in next door Colin (Winter), where she must learn what men want, while we learn more about Mike real life away from his brash personality.

Thoughts on The Ugly Truth

Characters – Abby is the uptight television producer that has put her career ahead of her dating life, where she has always been searching for the perfect guy, which sees her scary most away. When she does meet the perfect guy, she must learn to change working with new host of the show. Mike is the brash host of a show called The ugly Truth which calls out relationships and how men should get women and how women should let men in. He sends the ratings for the show way up and helps Abby come out of her shell, showing you can’t judge a book by its cover. This film mostly focuses on the two main characters, we get the assistant, the news anchors and Colin the doctor that Abby starts dating.

Performances – Katherine Heigl is an actress that did make an impact in the romantic comedy genre, she does a do well in this role, it is Gerard Butler that gets the most interesting performance because we believe his character and just how he has the broken heart in his character with each glance he shows. The supporting cast do add to the comedy in this film for the most part.

Story – The story follows two career man, with a female television producer and a male talk show host that both have different views on love and they teach each other about how to open their eyes to the other’s view point. While it does follow a traditional storyline it does all work to make the extremes of love feel believable. The only negative side from the story comes from just how the rest of the characters don’t seem to have lives outside our main two characters.

Comedy/Romance – The comedy comes from seeing how the two characters believe in different versions of love which only gets reactions from the characters, this helps with the romance because seeing different views of love could change them.

Settings – The film is set in a small city that shows that both of the characters want to be away from the busy cities which can see people lost in the shuffle.

Scene of the Movie – Balloon time.

That Moment That Annoyed Me – Why order drinks and leave the table before they arrive?

Final Thoughts – This is an enjoyable, fun comedy that lets the cast shine and shows love.

Overall: One to enjoy for rom com fans.