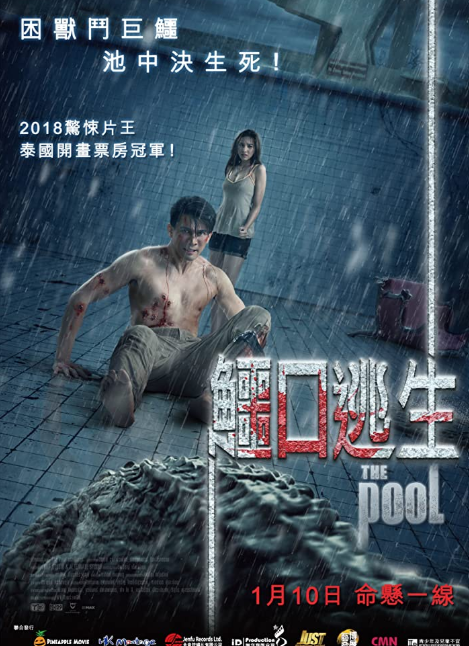 Plot: In an abandoned 6-meter deep pool, a couple is stranded there with a deadly predator.

Tagline – No water. No Ladder. No Way Out.

Story: The Pool starts as Day (Wongpuapan) is finishing off work on a film that is using the giant swimming pool, when he decides to relax while everyone heads off, little does he know that someone has started to flush the pool and before he notices, he finds himself too deep in the pool, with everyone else gone, he finds himself trapped in the pool.

Once the pool is drained, Day must care for his injured girlfriend Koi (Ratchiratham) who got inured diving in and he must deal with a hungry crocodile that is trapped with him, in a race to survive.

Thoughts on The Pool

Characters – Day is the slacker that finds himself stuck in the swimming pool, he has always not taken life too seriously, where he must try and figure out how to get out of the pool alive, save his girlfriend and escape from it add in a crocodile, he has everything to fight for. Koi is the girlfriend that gets injured, which needs protecting, she is kept in safety, while waiting for Day to take things more seriously.

Performances – Both actors are great with Theeradej Wongpuapan needing to get involved in the more physical side of everything in the film.

Story – The story follows a couple that find themselves trapped in an empty swimming pool with no escape and a crocodile in a battle to survive. This story might well have been made before ‘Crawl’, but it does have such a similar feeling in the battle to survive. The story does keep everything super simple as it is just the survival against the odds. The plan to stay ahead does keep everything feeling intense and by the end of the film, you literally don’t know what will happen next.

Action/Horror – The horror in the film comes from the crocodile attacking, showing how deadly it could be and how Day must try and stay ahead of the threat.

Settings – The film is set in the swimming pool, it has no escape, the pipe system do offer a potential outcome, but with nowhere to go the battle against the crocodile.

Special Effects – The effects are strong at times, but the crocodile never looks real during the proper attacks.

Scene of the Movie – The big battle against the crocodile.

That Moment That Annoyed Me – Certain crocodile scenes seem too CGI heavy.

Final Thoughts – This is an intense horror that truly keeps us on the edge of our seats during the incidents, being the one that people who liked Crawl, will love this.