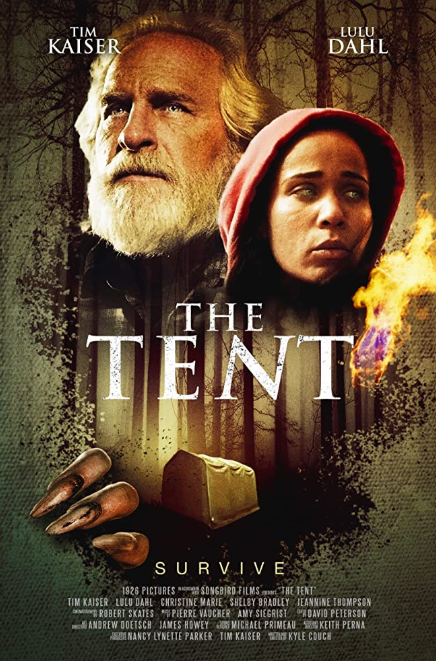 Plot: An apocalyptic event known as The Crisis has devastated David’s world leaving him to rely on survival tactics learned from childhood. Isolated and alone, David has taken refuge in a tent on the edge of the wilderness. Soon enough, another survivor emerges, Mary, who immediately begins questioning David’s tactics and ultimately putting them in the crosshairs of “Those Who Walk In Darkness”, unseen creatures that may or may not be responsible for The Crisis.

Verdict: Deeper Than You Can Imagine

Story: The Tent starts in the aftermath of an apocalyptic event known as the Crisis, David (Kaiser) has escaped to isolation where he is always trying to elude capture from the threat, when Mary (Dahl) finds David injured in need of help, she offers him help and the two must learn to work together despite not wanting to be working together.

As the two start showing weaknesses in human interaction, they come under attack from the mysterious whispers, that have been hunting the remaining survives on the planet, where the two need to decide to take a stand or remain hidden from the world. 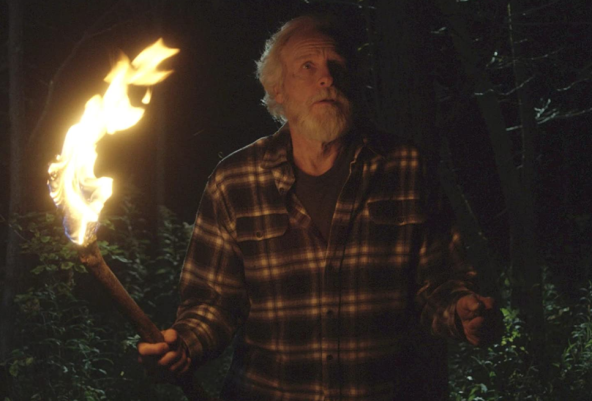 Thoughts on The Tent

Characters – David Has been living in a tent after the crisis event, he has kept himself away from trouble, being prepared for everything that comes his way, until he becomes caught in a trap where he finally needs help, he must learn that not everyone or everything is going to be a threat to him. Mary is the mysterious stranger that brings help to David, she is looking for shelter and believes the two could become stronger together in the battle to survive. We do only get glimpses of other characters in the film, who fill important moments, but aren’t the key to the deeper side of the story.

Performances – Tim Kaiser and Lulu Dahl are great together, they show the edge to their characters, we get to see more depth in the performances later in the film, which makes this even more impressive with the performances involved. 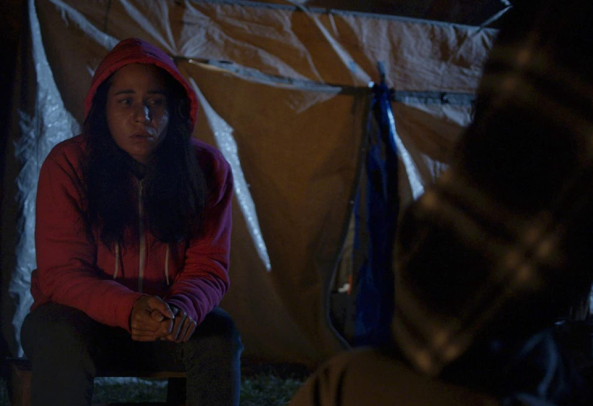 Story – The story here follows two strangers who meet in a post-apocalyptic world and look to survive the threat outside the tent, needing to work together to survive. This is a story that goes in a direction you truly don’t see coming, which is very refreshing, it is such a clever way to use this idea, that you need to take time to analyse if there are any hints along the way. This story does have an important message that needs to be told that will shine a light on what the true meaning in the story. The level of detail about surviving is a standout because we go through plenty of details about how to make it through this new world.

Thriller – The thriller side of this film circles around the terrors that could come from outside the tent, what is hunting down our two main characters.

Settings – The film spends most of the time inside the tent, where we focus on a plan to escape, while hearing something on the outside, giving us the creation of the tension in the film.

Scene of the Movie – The final third of the movie.

That Moment That Annoyed Me – We do have one too many cutbacks to pre-event.

Final Thoughts – This is a super smart thriller that does something you won’t see coming to bring attention to a real-life matter, with an excellent attention to detail. 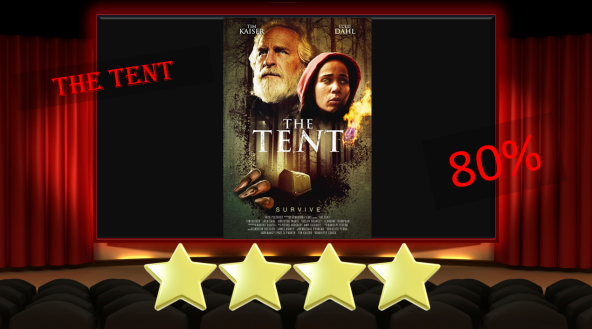 This is under Q because of actress Q’orianka Kilcher starring in the film. 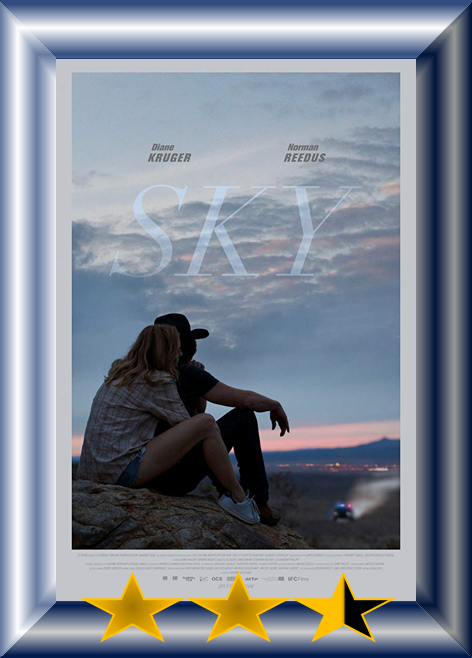 Plot: Romy (Diane Kruger) is on holiday in the USA with her French husband, Richard (Gilles Lellouche). But the journey quickly turns into a settling of old scores for this worn out couple. After an ultimate fight, Romy decides to break free. She cuts off her ties to a stable and secure life that has become alienating and escapes to the unknown.

Story: Sky starts as French woman Romy (Kruger) is travelling around USA with her husband Richard (Lellouche), the two do have their problems which resorts in Romy needing to defend herself from Richard, killing him in the act, forcing her to go on the run alone.

After learning she didn’t kill her husband, Romy decides to leave him and stay in America, heading to Las Vegas to start a new life, where at first she must find shelter and soon a job, which leads her to rancher Diego (Reedus) who offers her something she hasn’t experienced before, with this new future, will she enjoy the free roaming lifestyle or not. 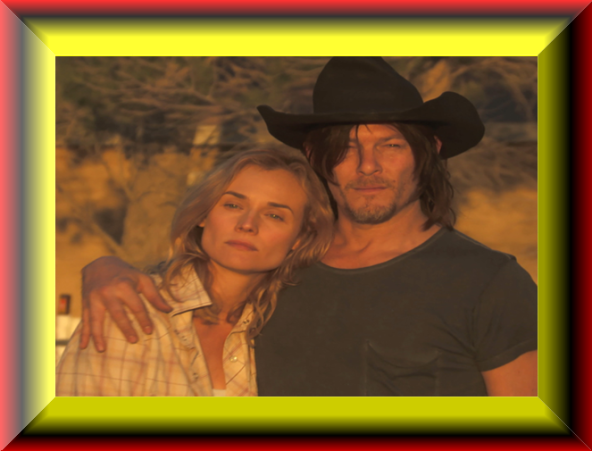 Characters – Romy is a French woman that is travelling with her husband around America, the spark in her marriage has started to fade and after defending herself from his advices, she decides to leave him and explore America. She befriends Diego and starts to enjoy her life once again. Diego is the mysterious man that Romy meets in Vegas, he offers friendship instead of just being a man that hits on her, he is so relaxed for who he is and this helps want to let Romy open up more. Richard is the husband that knows his marriage is falling apart, he starts getting defensive and abusive towards Romy. Everyone else that we meet are people Romy meets along her journey, helping her get through it or offering her shelter.

Performances – Diane Kruger us the star of the film, she does show the emotional impact a loveless marriage can have on somebody and how being free changes thing. Norman Reedus is always one of the better actors for this type of role, he does everything right without being challenged to be more. We don’t really see much more from the rest of the cast, which is a shame because of the level of talent we do see in this film.

Story – The story here follows one woman who leaves her loveless marriage in hope of finding something more in life with a man that has his own tortured past. This is a story that does the focused idea of trying to not just accept certain parts of life, when you could find more from just putting yourself out there, it doesn’t show that this will be everything you would imagine coming form life, just something you learn to enjoy. The pace of the story is slow and it does seem to point the direction of America only having two main locations, where meeting a stranger in Vegas would mean you get to learn more about life. This isn’t the most interesting story though because it only shows a woman that seems to find love in a location that isn’t always waiting for her.

Romance – The romance in this story follows Romy as she leaves a loveless marriage in search for new love.

Settings – The film uses the two settings, with Vegas being the meeting place and the open plains around it being the place where the everyday person would be living in.

Scene of the Movie – Rabbit.

That Moment That Annoyed Me – It just doesn’t seem to get going.

Final Thoughts – Slow moving romance that does have some surprises along the way, but shows that life can be found in the strangest places.

Overall: Life drama for all.