Plot: When the world’s greatest spy meets the woman of his dreams, he abandons his adventurous existence and settles into the security of suburbia.

Story: Spy Intervention starts when international super spy Corey Gage (Acker) who on his latest mission meets Pam (Delevingne) which leads to him moving away from the spy business, setting down to a simple life, only becoming too routine in his everyday life, which has added strain to his new romantic life.

When Corey’s partner Smuts (Anderson) returns to him with the desire to get him back in the field to complete his last mission, where he must go undercover with a sexy spy, even though the most important thing in his life, is fixing his marriage. 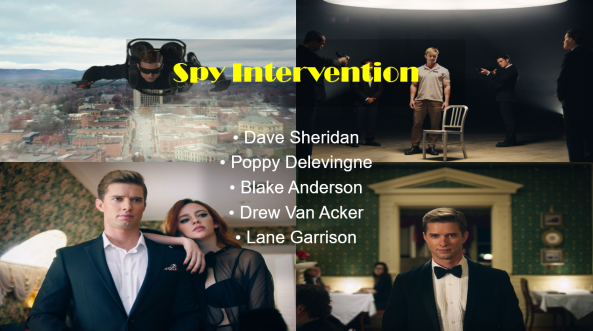 Characters – Corey Gage is an international Super Spy on top of the world, but a chance meeting makes him want to give up this life for a more simple life with a beautiful woman, only this has made him fall into a routine which sees him finding life boring. He reluctantly finds himself returning to the undercover world to complete a mission, all while trying to keep his marriage together. Pam is the woman Corey marries, giving up the life he once had for, she is also seeing the marriage become dull and notices that Corey is becoming more distant believing he is having an affair, needing to go undercover in search for the truth about her husband. Smuts is the partner that gets Corey to come back into the field one more time, getting sick of seeing him in the routine life. Alexandria is the sexy spy that is being pretending to be Corey’s wife for the mission, playing the part with ease.

Performances – Drew Van Acker as the slick super spy is very entertaining, he plays the role that does get to poke fun at the slick character. Poppy Delevingne is fun as the wife that believes her marriage is falling apart, she does show us how difficult it would be to process change on this level. The supporting cast do get plenty of laughs through the film too.

Story – The story here follows a once great spy that walks away from the business when he finds love, seeing him getting dragged back in for one more mission, only this could put his marriage in danger. This is a story that does get to poke fun at the spy genre, it brings to life the idea of trying to manage a personal life with a spy life and how difficult it could be to walk away and stay away with all the secrets. We get the awkward situations about where Corey finds himself in and how his balancing the two lives gets impossible. We might resort to everything looking like it is over reaction, only that does seem to be the point of how the story is set up tonally.

Action/Comedy – The action in the film doesn’t seem to get as much time as you would imagine, while we spend the time looking at the comedy, which falls into parody in places.

Settings – The film uses the two main settings, the everyday life ones where Corey is trying to live in, with the mix of the flashier spy life, which is more glitz and glamour.

Scene of the Movie – Dinner Party.

That Moment That Annoyed Me – Not enough action.

Final Thoughts – This is a fun spy movie that gets the tone correct by poking fun at the bigger franchise in the genre.