We are cheating once again with X, by picking this because of the X-girlfriend side of the story. 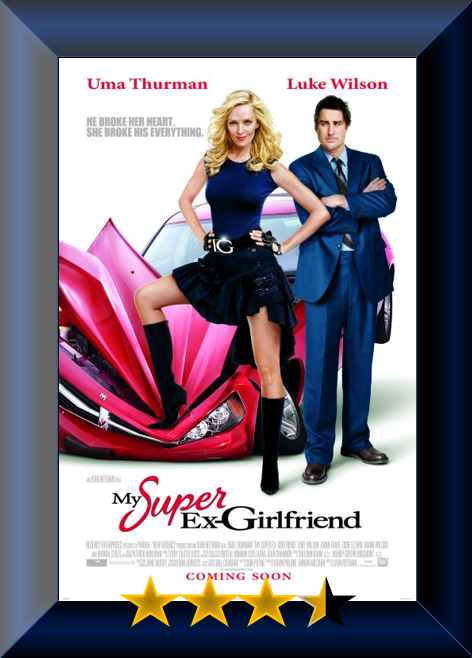 Plot: When a regular guy dumps a superhero for her neediness, she uses her powers to make his life a living hell.

Tagline – Hell hath no fury like a superwoman scorned.

Story: My Super Ex-Girlfriend starts when down on his luck regular guy Matt (Luke Wilson) meets a stranger on a train, Jenny Johnson (Thurman) who he helps get her bag back, thinking he could be about to start a new relationship. Jenny has a secret though, she is G-Girl a superhero that protects the city from crime.

Jenny normally keeps her secret identity away from partners, that is until her arch nemesis Barry Bedlam (Izzard) starts trying to us Matt to get to Jenny and things get even more complicated when Matt breaks up with Jenny, as she doesn’t take the break up well.

Thoughts on My Super Ex-Girlfriend

Characters – Jenny Johnson is a shy timid lady, she keeps to herself, is awkward when it comes to interaction, only she has a secret, she is the city’s superhero. She does want to date and after Matt helps her, she wants to let him into her life, opening up unlike anyone has before, though this does make her angry when he moves on. Matt is a regular guy, he is down on his luck, needing to turn things around, until he meets Jenny, he is happy to start a new romance, but isn’t comfortable with the idea of dating a superhero. Hannah is the work colleague of Matt’s, the two do have good chemistry in everyday life and Matt starts to see this the more is sees Jenny’s darker side. Barry Bedlam is the arch nemesis of G-Girl, he knows about her past and wants the powers that his old friend Jenny has.

Performances – Uma Thurman gets to play into her action figure with this awkward superhero that is looking for love. Luke Wilson as the regular guy caught up in the middle of superhero battle. Anna Faris as the potential new love interest and all-around nice women works well, with Eddie Izzard and Rainn Wilson getting plenty of laughs along the way.

Story – The story here follows a regular guy that finds out his new girlfriend is a superhero that has a crazy side, which sees her trying to ruin his life once he breaks up with her. This does take the idea of a crazy ex to new levels, with us having one with superpowers that can ruin and torment somebody’s life to a new level. We also get the spin on the women being the superhero, which often leaves the men needing to wait for the rescue to happen. We might well end up going to the extremes when it comes to how relationships are seen though.

Comedy/Romance/Sci-Fi – The comedy in the film does focus on how the superhero persona will get used to the idea of dating a normal person and vice versa, with the romance showing how no matter who you are, it can be difficult to find love.

Settings – The film gives us a New York backdrop, which is a setting I will always praise for the use when it comes to life dramas in and out of love.

Scene of the Movie – The break-up.

That Moment That Annoyed Me – It does go over the top too often for its own good.

Final Thoughts – This is a fun spin on the rom com, showing the women in the position of power, with the men left holding the fort, while she saves the world and shows just how crazy ex’s can be.