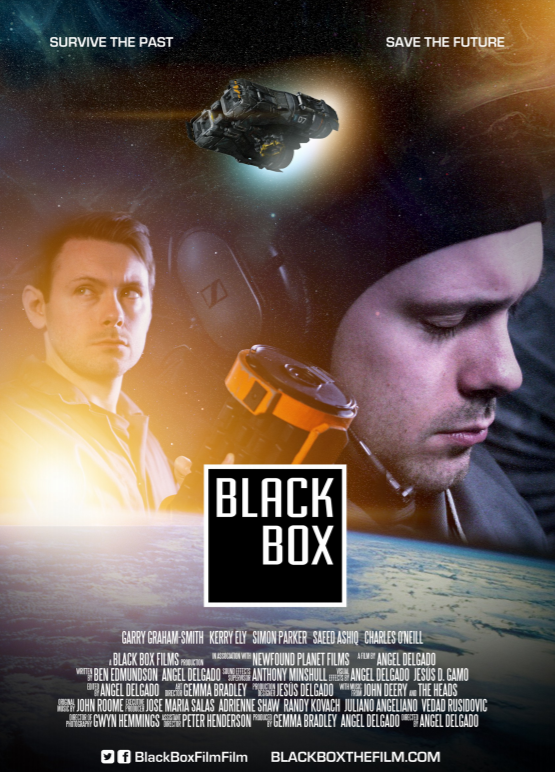 Plot: A sci-fi thriller about the only survivor of an accident in space, trapped in an escape pod and attempting to return to Earth alive.

Story: Black Box starts when Marcus Tyco (Graham-Smith) wakes up in an escape pod, spiralling out of control in space, injured, with his memory gone and no experience dealing with space travel, Marcus turns to the control station on Earth where Sarah is trying to guide his through the solution to get back into control the escape.

Getting help from Ray and Sarah, Marcus looks to find a way to rescue his friend in another escape pod, before returning to Earth, trying to do the right thing along the way.

Characters – Marcus is the man in the escape pod, he is injured, he can’t remember everything from his life before the pod and is spiralling out of control, he must take advice from Earth in an attempt to try and stay alive and make it home, while dealing with his own ideas of how he could save more people along the way. He does lack the experience to be on the mission alone, with only small memories helping him with his former training. Sarah is one of the technicians trying to help Marcus find a way home, she befriends him, being the voice that motivates him to hold on to hope. Ray is the senior technician that will give the best advice, even if he wants the black box back to Earth just as much as Marcus.

Performances – Garry Graham-Smith is the only on screen appearance in the film, he does a good job through the film, dealing with the claustrophobic atmosphere his character is trapped in, with the voice actors working very well with Garry.

Story – The story here follows a man that has become trapped in an escape pod spiralling out of control, where he needs rescuing if he is to make it back to Earth alive, we follows the man Marcus getting advice along the way, as he looks to survive the odds. This story does have a blend of Gravity and Buried, with the lone person requiring help to survive, we do get ideas with can be seen as riskier along the way, even if the slow approach could well have been best option. The conversations play out as they need to learn from the situations to solve the problems, while escaping from the bigger budget elements we might need to have seen leading to the reason for being in the escape pod. The story does have a couple of moments that could be seen as more filled, when it comes to the personal conversations, but otherwise it plays out very well.

Sci-Fi – The film uses the idea that our character Marcus is trapped in space, to show the sci-fi elements involved, as we get into the technical side of everything involved in the film.

Settings – The film is set inside the pod, we get the claustrophobic feeling from being trapped here, in the middle of space, with little chance of rescue unless procedure is followed.

That Moment That Annoyed Me – The personal conversations aren’t the most interesting for the most part.

Final Thoughts – This is a sci-fi film that does ask the big questions about how to survive an escape pod in space, once things start to go wrong, this does have the claustrophobic feel throughout, which is carried by the strong performance from Garry Graham-Smith.