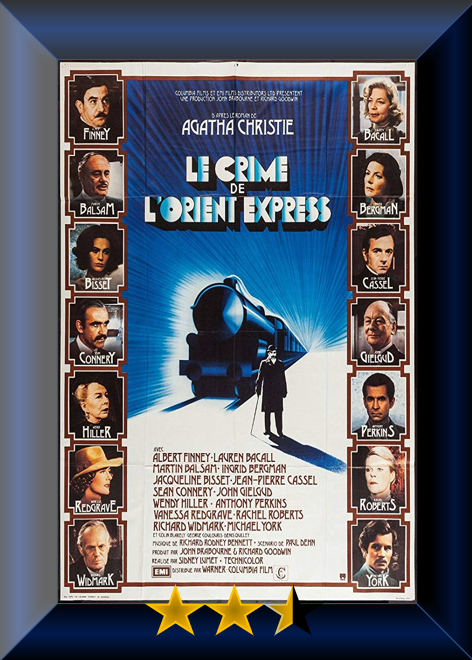 Plot: In December 1935, when his train is stopped by deep snow, detective Hercule Poirot is called on to solve a murder that occurred in his car the night before.

Tagline – The greatest cast of suspicious characters ever involved in murder.

Story: Murder on the Orient Express starts as the great inspector Hercule Poirot (Finney) hitches a ride on the famous Orient Express from Turkey back to London, only on his journey a passenger is murdered one night.

Hercule is pushed into investigating the case, which sees him talk to everybody on board as each one has a secret including the victim that might well have been involved in a famous crime that the murdered is believed to have been captured.

Thoughts on Murder on the Orient Express

Characters – Hercule Poirot is the world famous inspector that is known for solving nearly every case that comes his way, he can pick up on clues like nobody else and after his train journey to London he is given his latest case. He goes through the whole train’s passengers to figure out who committed the murder taking in each and every detail before solving the case. When it comes to the rest of the characters, we have a string of different suspects, with their own stories, they come from different backgrounds, with each being questioned by Poirot.

Performances – Albert Finney in the leading role is strong, he is much more watchable than the 2018 version of the character, keeping the character a lot more realistic. When we dive into the supporting cast, we have a star cast, who all get a scene or two with Finney, where they get to bring the characters to life.

Story – The story here follows a world famous inspector that gets thrown into his latest case after his train journey sees a murder, this case will become one of his most complicated ones of his career. This is based on a classic novel, one of the best, but it is one that always seems to struggle to be transferred to film, it does have plenty of twists and turns along the way, but sadly the ending is one of the weakest of all the mysteries you will see. The ending does seem to take away any of the mystery about what we are watching, leaving us feeling very flat with the outcome.

Crime/Mystery – The crime is a murder that leads to the mystery about who committed it and why, one that Poirot must solve.

Settings – The film keeps everything on board the train, it leads to the murder happening and with nowhere for the murder to run to, when the investigation starts.

Scene of the Movie – Finney is a good watch.

That Moment That Annoyed Me – The ending always feels flat.

Final Thoughts – This might well be a classic novel, it just doesn’t transfer to film very well at all, even with an amazing cast. 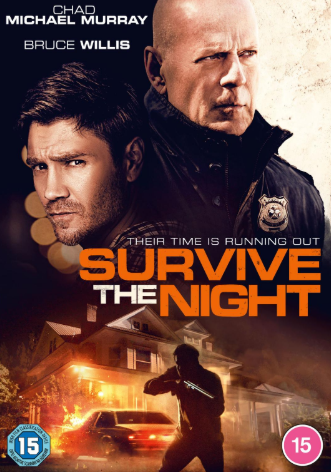 THEIR TIME IS RUNNING OUT
Screen legend Bruce Willis (Die Hard franchise) drives the action against a pair of dangerous criminals in gripping home-invasion thriller Survive the Night.
After committing a violent robbery, brothers Mathias and Jamie are making a getaway with their loot when a simple stop at a gas station escalates into a shoot-out due to Jamie’s violent impulses. With Mathias mortally wounded, trigger-happy Jamie is forced to stalk a trauma doctor named Rich (Chad Michael Murray) from the hospital to his home. Holding Richʼs wife, daughter, and ex-sheriff father hostage, Jamie demands Rich operate on Mathias and either save his life or lose his family…To survive the night, Rich must team up with his estranged, tough-as-nails father, Frank (Willis), in order to gain the upper hand and turn the tables on the criminals. With lives hanging in the balance on both sides and Jamie’s desperation leading to increasingly erratic actions, the tension rises as the morning approaches as father and son are forced to make a stand in order to defend their loved ones.

This is under J because of the stars of the movie, John Cusack and Julian Schaffner.

Plot: Earth 2019, 3/4 of it’s households have a robot. The AI supercomputer, Kronos, considers humans the biggest threat to Earth. A century later, few humans are left. Calia seeks the last human stronghold as does Kronos.

Verdict: This Drags Along

Story: Singularity starts in the year 2020, genius creator Elias Van Dorne (Cusack) unleashes his latest AI Kronos, who goes onto destroy the world, wiping out most of the world’s population in an instant.

97-years-later he releases one of the victims Andrew Davis (Schaffner) into the modern world as Kronos is in search of Aurora, the last known stronghold for mankind. Andrew is led through the world by Calia (Wacker), who has been searching for Aurora for years.

Characters – Andrew Davis is just a normal man caring for his mother when the attack happens, he finds himself waking up in the future with the destroyed world around him, somewhere he doesn’t know and must learn to adapt to the new world. Elias Van Dorne is the genius behind the new technology, he has always helped the human race get further and with his next step he knows what he needs to do, with his new technology taking over him, as he looks to destroy humanity. Damien Walsh is the second in command, watching over the destruction the two have called for. Calia is the woman that has survived the world under the AI’s control, she guides Andrew through the world he doesn’t know.

Performances – This is a film where the performances are not good, John Cusack looks bored out of his mind, while the younger members Julian Schaffner and Jeannine Michele Wacker try their best only to fall short with the material.

Story – The story here follows a world where AI has taken over, killing most of the world’s population, nearly a century after the first attack, the AI releases a human in hope of following them to the last know settlement in an attempt to take out the biggest threat. This story should be very interesting, it should keep us engaged throughout the film, only for it to become one of the mostly bland telling techniques not giving us chance to understand any of the twists involved in the story. It just doesn’t get going, after an opening sequence which does feel very interesting, the large time jump doesn’t help, because it isn’t made clear how many more humans are left or anything, it just feels like a mess.

Action/Sci-Fi – The action involved is a lot of destruction, which is all CGI heavy, leaving little to the imagination, while the ideas behind the sci-fi side of the film just doesn’t become as important as we would hope.

Settings – The film just looks like we are running through the countryside for the most part, which is clearly used to save money more than anything.

Special Effects – The effects are CGI heavy, they could have done with more of a finishing touch in places too.

Scene of the Movie – The first destruction.

That Moment That Annoyed Me – Everything after it.

Final Thoughts – This is a sci-fi film that does have a good idea, only it falls apart too quickly because the idea is just too big for the budget available for the film.