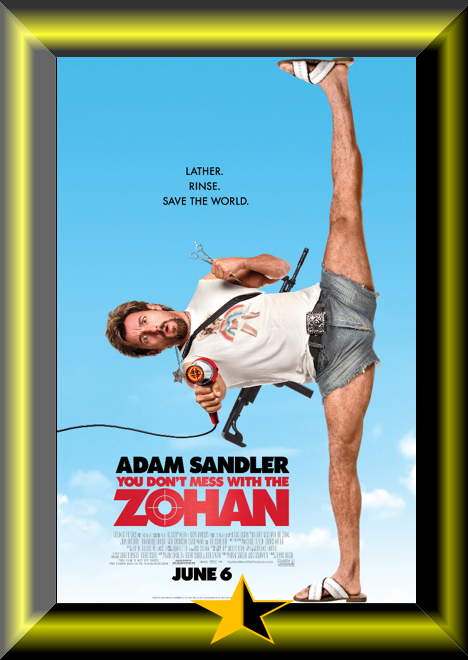 Plot: An Israeli Special Forces Soldier fakes his death so he can re-emerge in New York City as a hair stylist.

Tagline – He’ll blow you away

Story: You Don’t Mess with the Zohan starts when Israeli Special Forces Soldier Zohan (Sandler) is getting tired of the same old battles where he captures the terrorist only to see the government to trade them, when his greatest enemy Phantom (Turturro) has been released he uses the encounter to fake his death and follow his dream.

Zohan travels to New York to become a hairdresser using the name Scrappy Coco he wants to work in the biggest salon in the city, but gets laughed out, now he needs to bring his style to the city and learning about his people’s own problems.

Thoughts on You Don’t Mess with the Zohan

Characters – Zohan was once the top agent in the Israeli Special Forces he has always captured the terrorist even after the country has released them after he caught them. He does dream of being a hairdresser which his family sees as a disgrace, he fakes his death so he can head to New York to start a fresh as a hairdresser, where he saves a small business with his true style. Phantom is the greatest enemy of Zohan who always gets traded and always plans his next action, which sees him claiming his fame after Zohan faking his death. Dalia is trying to keep her small salon open and once she gives Scrappy a chance her business booms cleaning her debts out. Michael is the first person that helps Zohan in America and offers him a place to stay.

Performances – Adam Sandler does hit what seems like an almost insulting in the leading role, just playing into the stereotypes of any Israeli person. John Turturro is the same even if his role is smaller, while Emmanuelle Chriqui doesn’t help herself standout in the supporting role. Most of the cast is terrible through the film never hitting the heights of their roles.

Story – The story here follows an Israeli soldier that wants to hairdresser meaning he will need to leave his home and start in a new life in America, where his past comes back to haunt him. This is by far one of the most insulting stories you will ever see, it tries to play along the lines of the American dream is available for anybody. We get plenty of awful racist stereotypes being played out towards anybody from Israel which is used more often or not for political gain rather than actually story. This is typical awful Sandler story.

Comedy – The comedy is in the middle of the racist and insulting towards the Israeli people that should never have gotten any laughs.

Settings – The film is in New York where we see how small communities are trying to make a living, despite having disagreements behind them.

Scene of the Movie – End credits because it was over.

That Moment That Annoyed Me – Everything else.

Final Thoughts – This is a pure insult to comedy and cinema that should never have even been made.

Overall: Awful from Start to Finish.